Drew: I owned a lot of magic sets when I was a kid. That is to say, I enjoyed magic, but I wanted to understand how it was done. In may ways, this is the approach that I’ve taken towards art — I love being amazed by good music, movies, writing, etc, but I desperately want to know the techniques (the tricks, if you will) that make art so enjoyable. In general, that has been a very rewarding approach, allowing me a much deeper appreciation for how art works than I might have otherwise, but it has its limits. Ironically, I’ve never been able to really apply that approach to magic — partially because the techniques there are guarded as a matter of course, but mostly because I simply can’t get over how dazzling the effect is. Reading Saga leaves me similarly flabbergasted.

Issue 10 begins with a flashback to Marko in prison. A lot has changed since Alana and Marko first met — they’re using Gwendolyn’s translator rings to share “Secret Book Club,” while Alana is stealing glimpses of shirtless Marko as he toils as a POW. Their high times are coming to a close, though, as Marko is being shipped off to certain doom, so Alana hatches a plan to help him escape. Back in the present day, Marko and Klara have found Izabel just as the “planetoid” they’re on has started to hatch. They warp back to the ship, and sound the alarm to hightail it out of there. Unfortunately, Gwendolyn and The Will have caught up with them, and Gwen impulsively fires a heatseeking missile. Our heroes escape (thanks to some quick thinking on Alana’s part), but the missile ends up striking the Timesuck — the enormous creature that just hatched from the planet. The monster is appropriately displeased, and damages The Will’s ship, sucking Lying Cat into the vacuum of space.

This issue masterfully ramps up the stakes from the first scene to the last. Marko and Alana’s flashback starts as a casual (albeit forbidden) hangout, but quickly becomes a star-crossed lovers/fugitive story. Marko and Klara’s scene starts with them being confronted by a group of monsters, and ends with the planet they’re on crumbling beneath their feet. Planet falling apart not intense enough? A giant monster is emerging from it. Giant monster not enough? Heat seeking missile. Still not convinced? Well, it turns out there are a couple disposable (though colorful) characters we can get rid of.

For all my understanding of how Brian K Vaughan ratchets up the tension throughout the issue, I’m still too enamored with the what of it to hope to come to any conclusions about the how or the why. It’s a pleasure to be so dazzled with a narrative to be totally swept up in it, but it’s seriously getting in the way of the hardcore analysis I like so much. Moreover, it runs the risk of turning our discussion into little more than smiling and agreeing that Saga is great.

Another great example of this phenomenon is Marko and Alana’s “Secret Book Club.” I mean, a space for the characters to talk about the symbolic meaning of a work of art? That’s bound to yield some interesting insights into what Vaughan wants us to get out of this, right? Well, maybe. Alana and Marko both understand the sudsy love story they’re reading to really be about the war, but she balks at his ultimate interpretation that the war will never end.

Aside from being the perfect image for this website (seriously, expect to see this at least once a week from now on), it kind of stymies not just my interpretation of this scene, but this series as a whole. Is Vaughan suggesting that we’re reading too much into things, or are we supposed to disregard Alana’s assertion here? Or is Vaughan simply suggesting that every interpretation is equally valid? Perhaps we’ll need to meet this author, D. Oswald Heist, before we can draw any conclusions about Vaughan’s feelings on objective meaning in art.

Otherwise, I’m most mesmerized by the small touches Vaughan adds to make this all feel real. In the midst of all the magic and aliens and planetary hatchlings, Vaughan never forgets to ground the world in the kind of character moments we can relate to. Moreover, details like Alana freaking out when Hazel’s withered umbilical stump falls off are far too specific to be made up — you just know that this must have happened to Vaughan at some point.

For her part, Fiona Staples carries every bit of that detail into the art, giving everything a lived-in feeling that makes the space operatics that much easier to swallow. Of course, she also has a sense of humor about the setting, carefully designing what amounts to a space-age ball and chain. 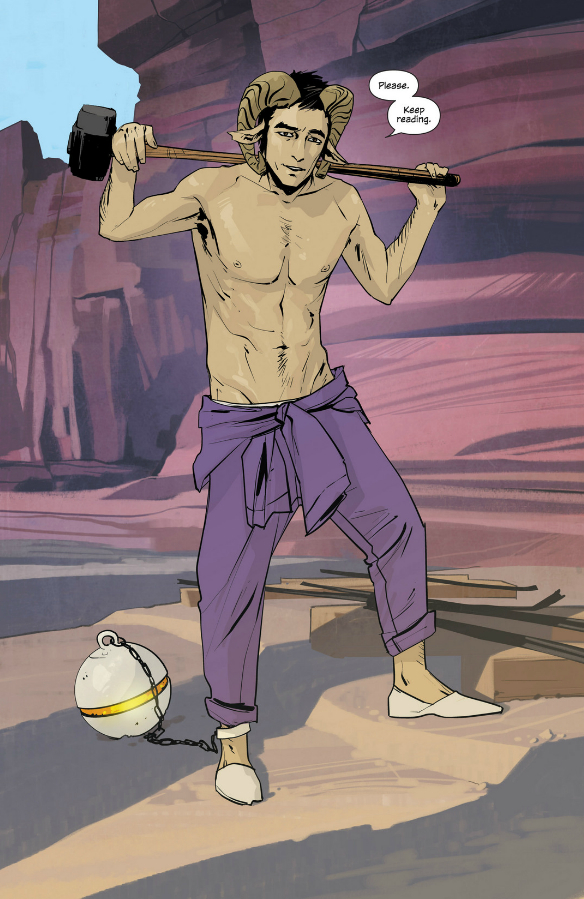 Also, how funny is it that this beefcakey image begging us to keep reading serves as the first page of this issue?

For all of these topics, though, the only thing I want to talk about is Lying Cat. Poor Lying Cat. Hazel’s voice over kicks in just before LC’s untimely demise to talk about collateral damage. She’s talking about bad breakups, though Vaughan is clearly having fun playing the parallel to this particular conflict (and the war in general), but my big interest here is the way narratives themselves might require collateral damage. To keep upping the ante, Vaughan had to kill somebody, but everyone else is a player in amping up the tension. Lying Cat was on the shortlist of characters whose death could be considered collateral damage, yet still have any impact on our characters. In this way, Hazel’s voice over acts as a bit of an apology — or at least an explanation — for Lying Cat’s demise.

Patrick, are you finding it any easier to digest this series? What do you make of the connections Vaughan is asserting between love and war? And — most importantly — how much are you going to miss those Lying Cat gags, on a scale of 100 to 100?

Patrick: Oh, about a million.

The image of Lying Cat just standing there, saying “Lying.” is one of my favorites from the series. It’s a concept so simple and so bizarre that I’m certain it will outlive the series in my own memory. Mark my words: when we are 80 years old, and downloading Batman comics to the HUD projected by our retinas for $29.99 ($39.99 if there’s a back-up), we’ll have but faint recollections of what all transpired in Saga. Then one of us will say “wait… was that the one with the Lying Cat?” And then we’ll tell stories about Dead Rising and Wind Waker until we fall asleep in our wheelchairs.

But Drew, we will have these common narratives to talk about. And even though we’ll be debating the meaning of Brian Azzarello’s Comedian or Grant Morrison’s Batman Incorporated, but the fact that we will continue to have a passion for them — and a desire to discuss what they might mean — means that we will connect with each other. When we were discussing issue 8, I made a pretty strong case that BKV was intentionally likening Alana’s book to Saga itself, but that’s clearly too narrow of a read. It doesn’t matter what that book is or what it’s about, the point is that it spoke to both Alana and Marko, and their individual desires to discuss the narrative transcended whatever differences might have been between them.

But, even with a conversation point as gimmicky as that, I also don’t have a whole lot to hang my hat on here. I like this series, but it’s messages and meanings are elusive. So, I’m just going to point out some little details you didn’t cover. Cool?

I generally find Fiona Staples’ art to be pretty imaginative, but she pulled out her A game when populating the planetoid. Obviously, we were all… uh… impressed by the imposing nutsack-giant, but these upside-down-faced midwives are absolutely horrifying. Staples even gets in a pretty good visual joke, where they appear to have long white beards until you get too close and release that’s their hair.

There’s also something insanely cool about the concept of these weird little wizard-priest characters that are essentially there witnessing the end of their world being called “midwives.” In the strictest sense, they are helping to usher a new life into the world, but in another sense, they’re just a cult watching their world die.

Oh, speaking of great namings: the Timesuck. That’s a baby, plain and simple. For all intents and purposes, it looks pretty much like a regular fetus.

The only distinguishing feature are its three eyes – which maybe connects it to the giant that was living on the egg? There’s so much to infer about the life-cycle of this creature, but mostly it’s just cute that Vaughan calls it a Timesuck.