Today, Mikyzptlk and Drew are discussing Age of Ultron 3, originally released March 27th, 2013. This issue is part of the Age of Ultron crossover event. Click here for complete AU coverage.

Mikyzptlk: In any post-apocalyptic scenario, you can either give in to the destruction that surrounds you or you can find that one last sliver of hope to hang on to. The first two issues of this event have mostly centered on a group of defeated heroes who are on the verge of giving up hope. The resistance, if you could even call it that, was rudderless and quickly losing its steam. It was all quite depressing, if not in a fascinating kind of way. The latest issue of Age of Ultron reveals that perhaps not all hope is lost and, armed with a shiny new plan, our heroes start on a path that can hopefully lead them to victory.

Issue 3 begins with the Avengers holed up in the crashed airship…still, where they are all talking…some more. Spider-Man begins the next round of conversation with an uplifting speech that doesn’t quite get off the ground. The response is the team recounting those they have lost, including Thor, Hulk, and The Thing. It’s a sad moment that leads to the question: Why didn’t Ultron take everyone out, and why go through all the trouble to destroy the world? The answer may just be because it will never be “enough” for Ultron, but before they could come up with a definitive answer an actual plan is developed. As revealed previously, Ultron has been letting people go about their way so long as they traded superpowered people for their “freedom”. The Avengers decide they’ll trade with Ultron, too, in order to infiltrate “Ultron’s world,” learn as much as they can and maybe even cause a bit of damage. They need someone who can take a beating and, after a bit of an argument, land on She Hulk (who’ll be escorted by Luke Cage).

In Chicago, Red Hulk, Black Panther, and Taskmaster are up to something. An Ultron appears and Red Hulk is quick to smash into action. He rips off an Ultron head but is spotted by other bots. As Red Hulk distracts them, the other two run for their lives. Unfortunately, Black Panther doesn’t make it, but Taskmaster is able to escape with the Ultron head intact. Back in New York, Luke Cage has knocked She Hulk out and has offered her to Ultron. They are brought into where I’m assuming they think Ultron is stationed, only to find something that no one was expecting in his stead. 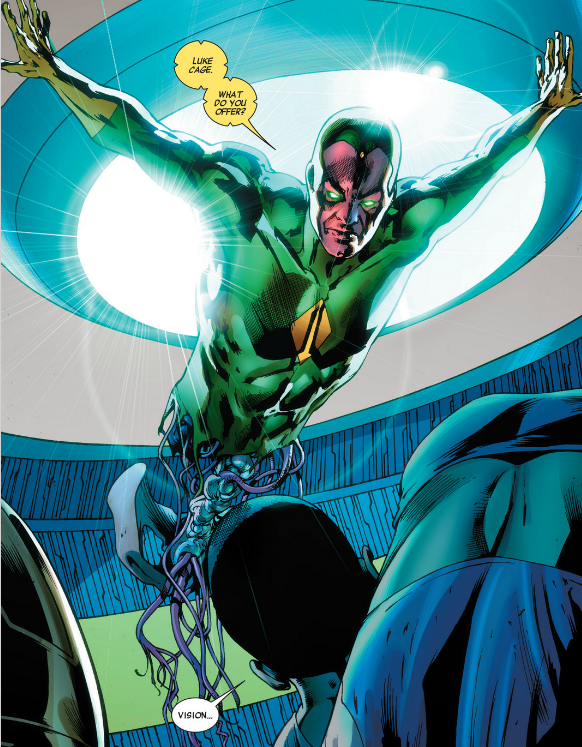 First of all, once again we are given an issue mostly of folks talking to each other. I’ve recently defended the second issue of Justice League of America, which also featured a bunch of folks yakking away, by saying that it was saved because I found what they were saying to each other interesting. I could easily say the same thing here, however what the characters of this story are saying to each other is vastly different considering the dire nature of their situation. Here, instead of getting to know one another, these characters are either arguing with each other, attempting to place blame, or are still trying to piece together what the hell happened or, more specifically, why it all happened. This has got to be the most horrible circumstances that I’ve ever seen the Marvel heroes in, but what I find interesting here is that even though our heroes may have lost sight of the light at the end of the tunnel, they are never too far off from finding it again. These are people who have lost friends, family, and their very civilizations, but they still haven’t completely thrown in the towel. What’s even more interesting to me is that Spider-Man still manages to be the cheeriest one in the room, and at least attempts to spread that cheer around.

Why this is so interesting to me is that this, as we all know, isn’t happy-go-lucky Peter Parker, but the much more dour Otto Octavius. Yes, I’ve accepted the fact that this really is Otto even though I wasn’t as convinced in the previous issues. Superior Spider-Man 6AU, which we’ll also be covering (check our Pull List for details), helped to clear up a lot of my Spidey related questions. His newfound appreciation for the people — make that the heroes —  around him has given him hope for a better tomorrow and, in this moment, he wants nothing more than to spread this confidence to the others around him. This is just one panel but this, combined with SS-M 6AU, is one of my favorite moments of this event. I’ve been focusing on the New York Avengers so far, so let’s move on the Chicago Avengers (if you can call them that, which it appears I just did). 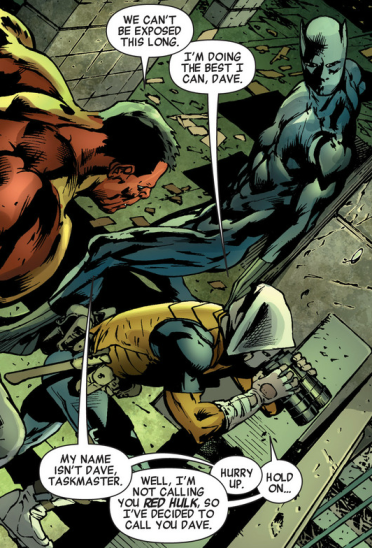 I’m not sure what they’ve been up to so far, but it’s clear that they are holding on to hope as well, most likely held aloft by some kind of head-snatching plan. Who they are delivering said head to is still a mystery (I’ve got my Monopoly money on Nick Fury), but it’s clear that they haven’t given up and it’s great to see that at least some of our heroes already have a plan in action. I suppose the conclusion I’m left with is that seeing a hero with nothing to do translates to a feeling of hopelessness, while seeing a hero jump into action, with clear intention, translates to hope. Hope is something that these characters, and this series, has needed since issue 1, and I’m glad to have gotten a taste of it here. Well Drew, how did the third issue of Age of Ultron treat you? Are all of the talking heads dragging you down, or are you still up for the ride? And what about the shocking conclusion? I certainly didn’t see it coming, did it have any impact on you?

Drew: Hey, so you know who is sitting at a writing desk and is entirely new to the Marvel Universe? This guy. I certainly wasn’t expecting the Vision, but only because I have no idea who or what he is. A cursory glance at his Marvel wiki page suggests that he is “good,” but his bio suggests that his history (especially where Ultron and the Avengers are concerned) is a bit more complicated than that. I can see how knowing that history would make that reveal exciting, but I was just happy Luke calls him by name in that last page. The surprise didn’t exactly work on me, but that’s to be expected when I step into a massive event like this without any real preparation.

Unfortunately, that’s the only surprise this issue really had to offer. I’m totally with you on the impatience of the talking heads scenes, Mik, though my problem with them is that they fail to convey any new information. Last issue, Cap announced having come up with a plan immediately after hearing that Ultron seems to be collecting Avengers, so there wasn’t much doubt that that plan might involve using that very fact to their advantage. In fact, once we see that Luke is already enacting the plan, the 6 page flashback devoted to debating the plan can’t help but feel protracted.

Mik mentioned Superior Spider-Man 6AU, which I think serves as an interesting contrast to this issue in a lot of ways. Most notably: that issue sees the conception, deployment, and ultimate fallout of a plan to defeat Ultron. Compare that to the conception and first step of a plan here (bearing in mind that this is the third issue), and you can see why this issue might feel a little draggy.

The other notable difference between this and SSM is the lack of voiceover. SSM, as always, stays pretty close inside Otto’s head, while the action here stays strictly third-person. Any and all emotions have to be broadcast through characters’ words and actions, and it’s a huge credit to Hitch’s art that they come across so clearly here. 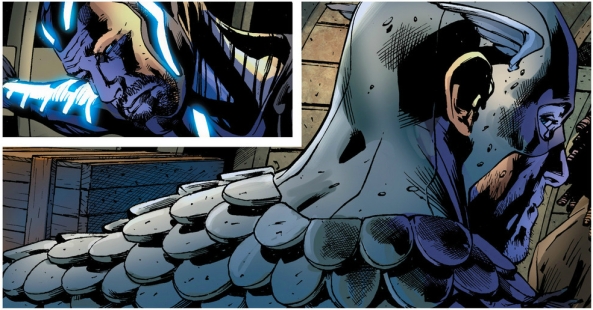 It’s stellar acting, which only makes me wish there were more emotions going on here than “weary hopelessness.”

I had similar complaints with the previous issue, and was met with cries for patience, so I want to be clear: I appreciate that the situation needs to feel hopeless. I absolutely understand how more time wallowing in the resigned impotence of the remaining Avengers drives home that point — I just think that I’m there, I get it, and underscoring it further feels redundant to the point of diminishing returns. Like, issues two and three might as well have been instructions to reread the first issue a few more times for all of the emotions they add to the mix (maybe with a “No, but really” for good measure). This stuff needs to serve some purpose, and “mood setting” stops being a valid explanation when the mood has already been so thoroughly established.

There are some places where the slower pace pays off — particularly when establishing the scale of Ultron’s destruction.

Maybe it’s a double standard that I’m willing to forgive the art for reemphasizing points that have been duly made in previous issues, but LOOK AT THE PRETTY.

As much as I can agree that Bendis has a penchant for only having one thing happen in an issue, those things continue to be huge, dramatic cliff-hangers that feel like the shot in the arm the series needs. I may continue to have my complaints for the entirety of this event, but you can bet I’ll be back for each subsequent issue. I always feel like I’m not quite getting what I want, but damn it if I’m not totally hooked, anyway.