Spencer: Identities change all the time in comics. Sometimes our Robins grow up into Red Robins or Nightwings; sometimes our Miss Marvels attain the rank of Captain Marvel; sometimes, rarely, Doctor Octopus can even become Spider-Man himself! This week’s issue of Superior Spider-Man again features Phil Urich, the former heroic Green Goblin and the current thief Hobgoblin, as he takes on yet another new identity and begins a new era of his life. What does this mean for Phil, and for that matter, what does it mean for Otto?!

With Spider-Man having outed Phil Urich as the Hobgoblin, his Daily Bugle co-workers contemplate how to process the situation and whether or not to turn him in; all the while, Phil seems to be losing his grip on sanity. When Spider-Man appears, Phil snaps and attempts to take his girlfriend Norah hostage; when that fails, he unleashes a sonic scream that almost kills everyone in the room. Phil pauses when he realizes he’s hurting his Uncle Ben, and that gives Otto the opening he needs to take Phil down. His spirit seemingly broken, Phil is carted away, but quickly freed by the Goblin King’s henchwoman, Menace. From there, the Goblin King himself strips Phil of his old identity and grants him a new purpose: 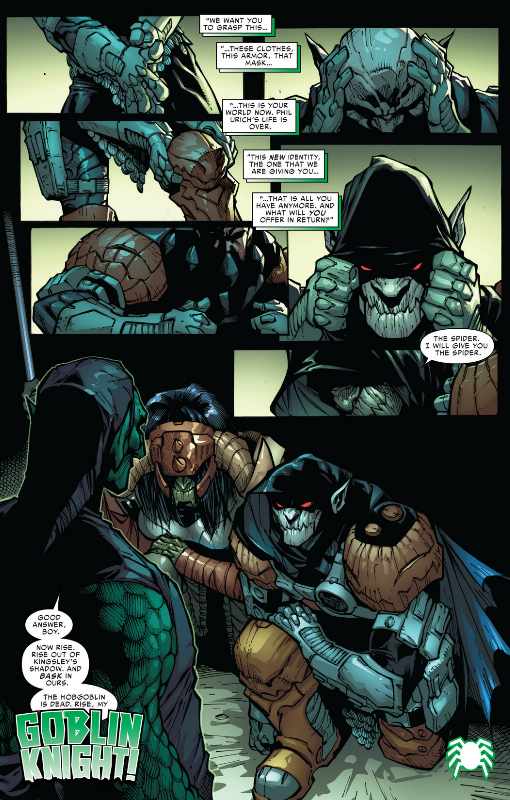 Last issue, I called Phil Urich a dark mirror to the late Peter Parker, and those similarities continue in this issue; Phil’s even got his own Uncle Ben, for Christ’s sake! Still, as I was reading this story, it was the words of my co-writer Ethan from that same review that echoed in my mind. He compared Phil to Otto, and it’s the similarities in their identity crisises that proved most interesting to me this time around.

Phil Urich was once a heroic version of the Green Goblin, and while that phase of his career ultimately fizzled out, he still seemed pretty happy with his new life as the villainous Hobgoblin prior to this storyline. He had a great job, for starters, and a great girl; Phil rattles these facts off facetiously sometime during this issue, and maybe I’m completely misreading the character, but I think there’s some truth to it. Regardless, this all changes when Phil snaps and takes Norah hostage.

Would Phil have made such a drastic choice no matter what, or did the pressure of Otto’s manhunt lead to it? Ultimately, it probably doesn’t matter, as, at the end of the day, Phil seems more than happy to shed his humanity—and both his identities as the Hobgoblin and Phil Urich—to become the supervillain “The Goblin Knight.” This reminds me of something else Ethan said in our last review. He said that, thanks to the threats of the Superior Spider-Man and the Goblin King, the place for small-time villains like Hobgoblin in the world seemed to be shrinking, and that they’d need to either shape up or ship out. Well, it looks like Urich decided to shape up (Hopefully not by wearing those awful Sketchers Shape-Ups).

So how does this all relate to Otto? Well, like Phil Urich, Otto is also someone who has switched both sides and identities with frequency. At the start of this series Otto abandoned his life as Doctor Octopus to take on the persona of both Peter Parker and Spider-Man. Recently, however, he’s begun to consider abandoning Peter Parker altogether, and it appears that only his relationship with Anna Maria is tethering him to Peter’s former life. Can Otto keep it up, though? His efforts to rid the city of crime have led to the arrival of the Goblin King and the ascension of formerly B-List villains. Could this escalation eventually lead Otto to take a path similar to Phil’s and devote himself fully to being the Superior Spider-Man?

More importantly, would that be a bad thing? On the one hand, the only real reason Otto is “required” to remain Peter Parker is because that’s what we readers are accustomed to, but on the other hand, Otto exorcising Peter Parker from his life could very well mean losing the morality Peter’s memories give him as well. Writer Dan Slott’s been focusing on this plotline for the last four or so issues, and he’s yet to give us any easy answers. Instead, he keeps adding complexity after complexity, and I love him for it, because it just makes each issue that much more fascinating to dissect.

Slott applies the same level of ambiguity to the moral repercussions of Otto’s actions, and again, it’s a smart move. Otto’s public outing of Phil Urich is actually one of his more logical, useful tactics, and one I basically endorse, but it doesn’t mean that it’s without its downsides.

Revealing Phil’s identity helped to corner and capture him efficiently, but the pressure created by it may have possibly pushed Phil towards insanity (or at least pushed him there faster); if nothing else, it definitely created a very real danger for the crew of the Daily Bugle. Captain America, likewise, doesn’t exactly see the merits in Otto’s new methods:

Honestly, I think Otto’s going to pull a “You can’t fire me, I quit!” on ol’ Cap (It certainly would explain why he didn’t blast off into space with the rest of the Avengers). Shelby, what do you think of the methods Otto used to capture Phil Urich? Did you enjoy this spotlight on Hobgob—er, I mean, on the Goblin Knight, or are you eager to dive back into the fascinatingly complex mind of Otto Octavius? Any thoughts on the interludes with Tiberius Stone or Wraith? And isn’t it kind of sad that Carlie’s main suspicion about Spider-Man basically boils down to “Peter was never this competent”?

Shelby: Hey, if it’s an inability to manage basic adult tasks like balancing a checkbook that confirms Carlie’s suspicions, then three cheers for Peter Parker’s incompetence.

I won’t lie, I miss Peter Parker. I’m sure I’ve said it before, but it’s Peter Parker who makes Spider-Man an interesting character to me. But, I can’t deny how fascinating I find Slott’s toying with the gray moralities of vigilantism. The panel you included is a perfect example: Otto insisting he’s the good guy after turning the whole city into a lynch mob and putting a group of people into an extremely sensitive, dangerous situation is laughable. I’m reminded of The Dark Knight, when the Joker held Gotham hostage until someone killed the man who knew Batman’s identity. Otto may not have held the city hostage, but he did instantly deputize a borough’s worth of vigilante’s, and forced a hostage situation. I know we can play the “what if?” game all night, but what if he had been wrong? Urich had (unknowingly) outwitted his spidey-bots, and instinctively got rid of most of the transmitters Otto planted; accidentally or not, he’s proved to be a worthy advisory, he could absolutely have been leading Spider-Man on. What would that have done to Otto’s “good guy” standing?

Spencer, you ask if I am enjoying the Goblin Knight, or if I’m dying to get back to Otto, but I don’t know that the two are that different. I’m curious to see what Urich’s ascension to the “superior” Hobgoblin will mean to Otto. At this point, what exactly is it that is keeping Otto tied to the idea of being a good guy, as loose as his definition of good appears to be? He wants to prove that he was better than Peter, but now Green Goblin and his Goblin Knight have bested him. Green Goblin has built a crime empire literally under Spider-Man’s nose, and there’s no reason for him to stop. All he has to do is activate the Goblin Protocol again, and the spidey-bots will be out of commission. How will Otto cope with being so easily outwitted? I’d say he’d activate some sort of “drastic times call for drastic measures” plan, but I can’t imagine how things can get more drastic than giant spider-tanks. Hobgoblin’s new, superior identity might be the the tipping point for Otto, the thing that makes him truly cross the line from good guy to bad. That would be yet another bold choice for Slott to make with this title and character. Even though I still find myself wanting Peter back behind the mask, I trust Slott to see this story out to the bitter, superior end.

3 comments on “The Superior Spider-Man 16”