Mikyzptlk: Hands down, the best kind of villain is a complex one. Long gone are the days when it was acceptable to portray a villain as a mustache-twirling evil-doer wanting nothing more than to do evil for the sake of evil. Today’s villains need a reason to get up in the morning and do what they do. Villain’s Month is a great opportunity to explore what those reasons are, and it has had a varying amount of success with that so far. Superman 23.2 goes to certain lengths to give Brainiac some new motivations. Unfortunately, it falls a bit short, leaving me just a tad disappointed.

Okay, secret origin time. Brainiac was once Vril Dox,  a super-smart dude from the planet Culu. He learned of the existence of “The Multitude,” a swarm of creatures from the 5th Dimension. It turned out that the swarm from dimension five is all about destroying planets for some reason, so Brainiac tries to find ways to upgrade his people with technology hoping that it would save his world. Eventually, he upgraded himself and shrunk down a portion of his planet. He also saved anything he deemed representative of the planet and its culture, its essence. Today, he continues to “save” the planets he has determined are on the Multitude’s hit-list, while simultaneously trying to find other intellects to aid him in his plans to destroy them for good. 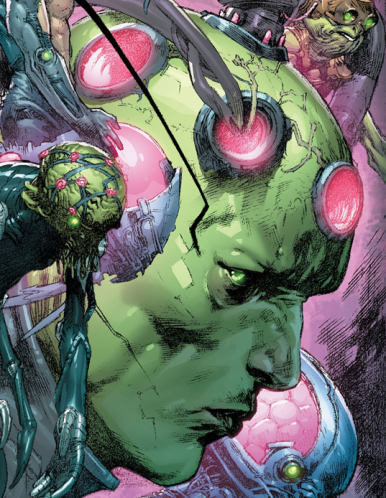 Tony Bedard adds some new elements to the Brainiac story that has the potential to prove somewhat redemptive of the character, or, at the very least, may come back to bite him in his green, cybernetic butt. Ya see, in order to perfect his “technorganic” upgrades, Vril Dox needed to run some experiments. Unfortunately, he uses his own son as a test subject. For some strange reason, his wife does not take kindly to this, which lands Brainiac in a tiny spaceship/prison cell. Vril Dox escapes his restraints and turns himself into Brainiac. He returns to Culu and begins to harvest the planet. Then, this exchange occurs. 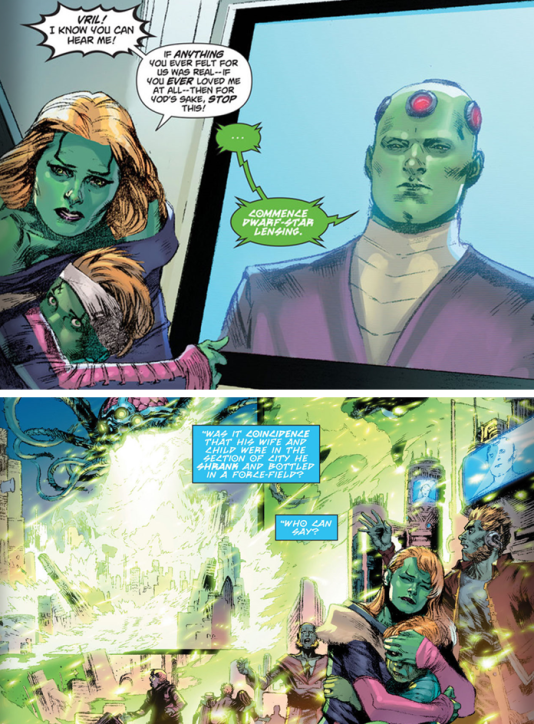 So, it seems that it’s possible that Brainiac isn’t all bad. He ends up saving his family in the end, though the reason why is left up for debate. I wouldn’t it put it passed Brainiac having an ulterior motive, but he may have at least a shred of decency in him afterall. Either way, I think it’s important that Bedard tried to add a little bit of grey to the mean, green machine. I think we all like complex villains, and I’ve always found Brainiac lacking in emotional complexity.

Well, that’s it. That’s Brainiac. Okay, that’s not quite it. There’s more presented in this story, and it’s so close to reinvigorating my interest in this character. Bedard tries adding a bit more complexity to the mix, but I feel as if he may have missed the mark in this next instance. Brainiac isn’t just collecting worlds randomly, he’s going after specific planets being targeted by The Multitude, worlds which comprise his “masterlist.” 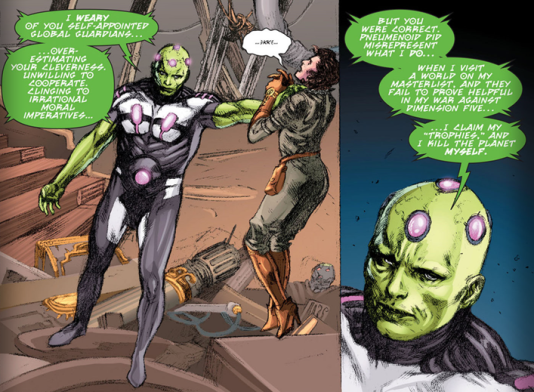 Brainiac wants to destroy The Multitude. This could actually seem heroic, except for the fact that we don’t actually know why Brainiac wants to do it. Is it out of vengeance because the space-swarm destroyed his planet? Is it because the swarm is still out there, destroying even more planets? I’m not convinced that he’s trying to stop the Multitude out of a sense of justice. Even if Brainiac did save his family, he is clearly painted as a cold and calculating monster in this issue. I mean, the dude experimented on his own son. It’s great that there’s more to Brainiac than a world-collecting obsession, but there’s too much ambiguity going on here for me to really latch on this. It’s like Bedard is trying to give Brainiac more more motivation for what he does, but he doesn’t fully explain himself.

That was my major gripe with this issue. Other than that though, I think that Bedard managed to tell a decent origin story that wasn’t entirely passive. If you read our write-up of Relic, then you know that one of the major complaints that Patrick and I had about that issue was in regards to its passivity. Bedard manages to avoid that somewhat by placing portions of this issue in the present day. The issue actually begins on Noma, another planet under attack –excuse me– being saved by Brainiac. The champion of Noma, a steampunk inspired world, goes by the name of Victoria Viceroy. She’s a pretty cool character (although I am a sucker for steampunk), so it’s a shame she’s destroyed almost as soon as she’s introduced to the DCU. It would be interesting to see these “Global Guardians” team up against Brainiac one day in order to stop him once and for all. Ah, but if wishes were horses and all that.

At this point, let’s bring on our guest-writer, the world-famous (get it?) Mogo! Please Mogo, don’t hold that terrible joke against me, and let me in on how you felt about this issue. Did you have the same problems that I had, or was Bedard able to hook you on his contributions to the character? While I’m a big fan of Bedard, I think he’s better suited to characters with a bit more personality. What about you?

Mogo: ‘Pur-shee-ate-it, Mik. I gotta say, I really dig how dedicated Tony Bedard is to Grant Morrison’s material. The following dialogue is from one single panel in Action Comics #7 by Morrison: “On Yod-Colu we began as C.O.M.P.U.T.O.  On Noma they called us Pneumenoid. On Bryak: Mind2. On Krypton –where you were born– we were Brainiac 1.0.” Morrison was delivering ideas and plot points to us at breakneck pace for each of the 18 issues in his run and things came at us so hard and fast that we often had to stop and consider what the fuck was even happening. Here, Bedard is doing the work of binding Morrison’s ideas; we’re now able to zoom down into Morrison’s Action for a closer look. What Morrison divulged in just one panel we can now see in better detail across the first four pages of Superman 23.2: Brainiac.

Visually, I appreciate the realism and consistency of figures in artist Pascal Alixe’s pencil work, but, somehow, the work looks rough and unfinished to me. It’s a shame, because I believe I could very much enjoy this work if it were more polished; that first splash Mik has referenced, for instance, reminds me in a way of a Drew Struzan illustration…but, like, a first draft. I’m not sure how much of this is the inking. I was also really disappointed by Gene Ha’s cover for some reason. I loved his work on Action #9 but have been less impressed with his Phantom Stranger, and am just kind of bored with this cover (even in lenticular 3D, which I love!). 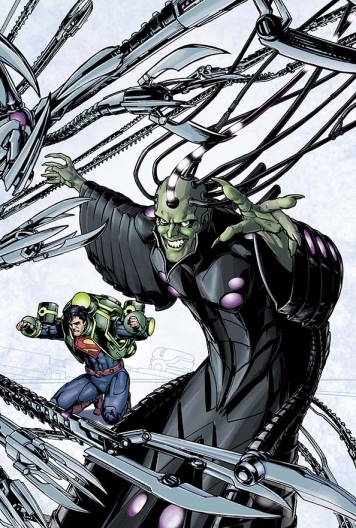 Brainiac is characterized as a blood-lusting world destroyer who experimented on his own son and then bottled up his wife and kid with no intention of restoring them to normal size. Instead, he covets them as objects in a prized collection of imprisoned cultures from the worlds he blew up. So, it’s fascinating to me that he would lie about it. Why does he care if anyone thinks he’s trying to save them from The Multitude? Despite his near-constant efforts towards genocide and murder, does Brainiac still consider himself to be the good guy? Bedard’s Brainiac kind of reminds me of a certain North Korean dictator.