Patrick: How do we heal? Whether the wounds are physical or emotional, there’s almost never a good answer to that question — certainly never an easy answer. When I look back on the biggest hurts I’ve recovered from, I know that I did heal, but I couldn’t for the life of me tell you how. I remember at the time feeling like there would be no relief — from a broken heart, or a broken bone. I was always afraid that I’d never get better, that I would only ever forget what “better” feels like and accept broken as my new emotional base. It’s unsatisfying and it’s messy and it’s prone to regression. The biggest fuck of it all is that there are no shortcuts. All of the Turtles (and their friends) are in need of healing, and it’s been such a slow beautiful process, I can’t help but feel unnerved when April introduces a magic healing goo. Fortunately, the tension between the quick fix and honest healing is right at the front of yet another fantastic issue of TMNT.

The Turtles have all settled into regular rhythms on the O’Neil’s farm: Raph spar-flirts with Alopex, Donnie fixes motorcycles with Casey, and Leo continues to mope and train in solitude. Splinter recognizes that alone-time isn’t exactly what his oldest son needs, so he attempts to comfort him with the memory of Leo’s mother, the late Tang Shen. Interestingly, Splinter lets on that he too has seen the ghost of Shen before offering Leonardo his blue mask and asking him to rejoin his family. When the Turtles are attacked that night by a bird mutant flanked by four Foot Clan assassins, one trust bond is broken (as Raph accuses Alopex of double-crossing them… again) and one trust bond is reforged as Leo takes up his mask, and his sword, in defense of his family. 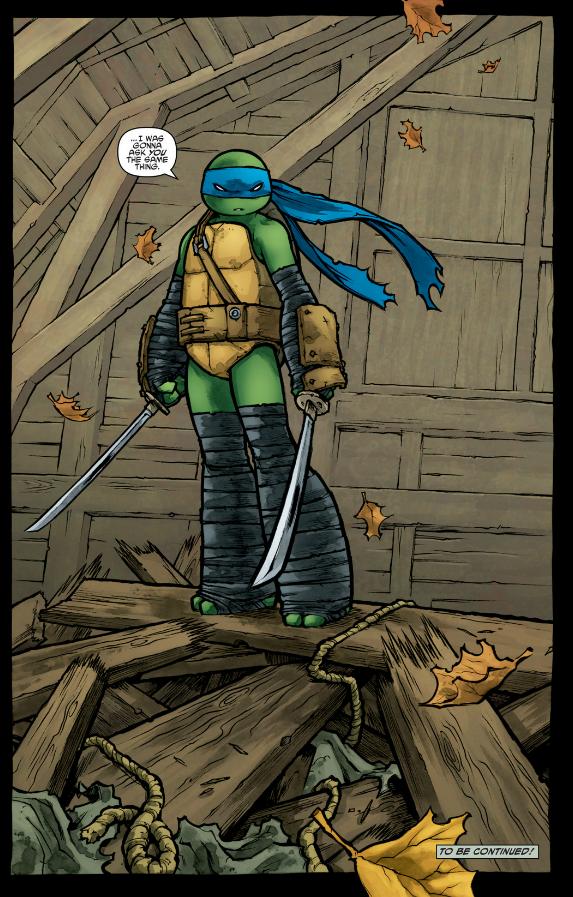 I know, I know, last page spoilers — SORRY — it’s just such an incredible work of art from the team of Sophie Campbell and Ronda Pattison. Pattison’s colors are actually on fire throughout, and she wisely applies greater shading to more dramatic lighting to the more emotionally resonant panels — the king shit of which is this last page. Pattison is also careful to bring those beautiful autumn leaves to life in stunning yellows and browns. It’s a strange unifying image: from the top of the first page to the bottom of the last, crisp fall leaves are everywhere. This solidifies the sense of place, and hammers home the theme of change. I didn’t realize it at the time, but City Fall felt very much like summer in the city — Santoluoco’s grimey sensibility deftly capturing the tight, muggy feeling of August in New York. Summer was a time of loss for our heroes, so while Spring is usually the time we associate with rebirth, Autumn is an equally transformative time.

Honestly, I love everything about the way this book looks. Campbell favors standard layouts, occasionally allowing one figure to dominate the page. This allows for remarkably clear storytelling, and a ton of opportunities for subtle acting — a task which Campbell absolutely owns. Whether she’s deadpanning Raph’s response to an insult, or letting Splinter be more vulnerable than he’s comfortable, there’s no ambiguity on the character’s faces. This more restrained approach to layouts means that Campbell can deviate from it to a huge effect — as in Leo’s training / flashback sequence. Not only do we get these un-inked pages signifying memory, but there’s this wonderful drawing of Leo outside of the panels, as though he can’t even stand to stay in this moment. Even the panel dividers recede as Leonardo doubts himself. It’s fucking gorgeous and I’ll stop talking about it — let’s just look at it.

And if page after page of mindblowingly effective art isn’t enough for you, this thing’s also incredibly well written. Writing credit again goes to Kevin Eastman, Tom Waltz and Bobby Curnow, with Curnow also being credited as the series editor. Waltz is also an editor at IDW — it seems like they’re not taking any chances when it comes to the quality on this series: only writers and artists with real dogs in this fight. There are two different metaphors that run throughout this story’s spine — the first being math in baseball and second being Splinter’s allegory about the sword that draws no blood. They’re both effective bits of writing that articulate well observed truths about these characters, but they double as a window into how these characters are trying to process the bizarreness of their world. Casey’s take on the math-in-baseball is most telling: he tells April that she’s “over-thinkin’ things ain’t really complicated.” It’s a blue-collar sort of wisdom: you can’t rush healing just by being clever.

Ah! But then they do have that ooze and April’s planning to use it on her father! Taylor, let me ask you: does that sound like a bad idea or the worst idea? Also, how did you feel about the progressively flirty relationship between Raph and Alopex? I sorta think it’s sweet — and I think both of those characters could use a win right now — but there’s something weird about sensing sexual chemistry between a fox and a turtle, right?

Taylor: Yeah, the actual specifics of an intimate relationship between a reptile and a mammal are odd. I think it’s best if we just keep their possible romance in the story book zone. “Turtle one day met a pretty fox. The fell in love and lived happily ever after.” Let’s keep our minds in the PG range with their relationship, shall we? Still, I really like that their relationship isn’t a happenstance of them being together. Rather, it’s a thing born out of mutual experience. When having their heart to heart, Raph mentions to Alopex that when he first mutated he was alone, much the same as she.

Where Raph was lost and wandering around New York, Alopex had her entire family slaughtered by Shredder. Maybe those experiences aren’t equal, but it does mean that each character spent a lot of formative time feeling alone. With that in mind, it seems fitting that these castaways would find each other and share a mutual view of the world. Also, I get the sense that Alopex has a feisty side to her given her penchant for launching herself headlong into dangerous situations. If their bond as loners isn’t enough to bring them together, then maybe their hot-headedness will do the trick.

However, the issue of the ooze (can that be an event title PLEASE?) casts a shadow over the romantic proceedings of this issue. It’s hard to tell whether this stuff really is of any use to anyone. On the one hand, it can heal, but on the other, it can create monsters. How do you negotiate something like that? April is sure that the ooze she snatched from Stock-Gen is only of the healing variety but how can she be sure? While I would like to believe her father could be healed by the green goop, my senses tell he might turn into something other than a fully functional human being. He is a scientist, so could he possibly turn into a fly, fulfilling my dreams of seeing a fly-mutant-scientist ala Baxter Stockmen of ’90s animated fame…

More interesting when considering ooze is what it means for the turtles in relation to their reincarnation. There’s an order to reincarnation — according to those who believe in it — and the turtles are in clear violation of that principle. Normally, if you’re reborn an animal that means you haven’t done so hot in your past life. You have to put in your dues before becoming a human after you die. However, by becoming effectively human in all but outward form, the turtles seemed to have skipped a step in this process. What sort of karmic consequences could they be wracking up by such a thing?

Back to the issue at hand, the art is such a pleasure to behold. Patrick, you already did a great job of summing up lot of the techniques Campbell and Pattison use to make this issue so pretty. But man, did you check out the character design? Koya’s appearance, along with that of his assassins, is wonderful.

Everyone in this panel is downright terrifying. From Koya’s talons to the claws on the assassins hands, it’s clear these fuckers aren’t here to mess around. I appreciate the subtle similarities reflected in the design of both of these killers as well. Aside from the talons/claws, both character designs sport leg and torso wrappings and long contour lines. As Splinter says, these dudes are the best of the best. Given his similarity to the assassins and the fact that he was once Shredder’s personal pet, it seems like Koya will be quite the adversary to the turtles. Yet another beast created by the ooze.

I should add that his appearance also portends the end of the time of healing for our heroes. It’s going to be sad to leave the peaceful farm, but at the same time I can’t wait to see Mikey gunning down the streets of New York on the turtle-cycle.