Scott: As a kid, I didn’t enjoy ghost stories very much. I did my best to avoid them, but sometimes, late at night at a slumber party or around a campfire, it was impossible. I endured; listening wasn’t the hard part. In the moment, whatever shock or gore the stories contained didn’t affect me much. It was the aftermath, the lingering psychological torment — the fear, however irrational, that maybe the deranged killers they told these stories about might actually exist. In The Flash 28, Barry Allen is confronted with my greatest fear: the murderous monster from his childhood ghost story is real. A ghost story combined with a detective story, this issue is as fun as you can imagine, even though all of the elements don’t mix together quite right.

The issue opens with Barry locked in a fight with a ghost. Only, it’s not actually Barry doing the fighting — he’s possessed by Deadman, an ally, who took control of Barry so that the ghost couldn’t. You see, the ghost is that of Ulysses Sutter, the Keystone Killer, who has possessed some of the Gem Cities’ most notorious serial killers. Sutter’s ghost jumps into the body of some biker and takes off, while Flash and Deadman do a little research and figure out his goal: to end the bloodline of Marshall Fletcher, the man who killed him (and then went on to found Central City). Sutter takes another victim and Barry realizes that during their fight, Sutter saw inside his head and, most importantly, saw how to access the police database. He rushes to the crime lab, only to find Singh standing over several dead scientists with a pickax in his hand.

Dammit Singh! He looks like a spouse who’s been caught cheating. “Honey! This isn’t what it looks like…What are you doing home so early?” I also love that “Next: what did he do?” teaser. Hm, I don’t know. If only there were some context clues, like a bunch of bodies with pickax wounds lying all around him. Oh wait, I think I’ve cracked the case! I should be a detective.

OK, getting back on track here. The issue briefly touches on some emotional moments — namely Barry’s preoccupation with his Mother’s murder and another strong hint that Captain Frye is Barry’s real father — but for the most part it’s a well-focused detective story. Drew and I were both pleased with the way this case was introduced in The Flash 27, and it continues to unravel in interesting ways here. The mystery is more or less solved, as we learn the killer is Sutter, the miner introduced last issue. But there are some interesting twists along the way. There’s something strangely comforting about the discovery that the Gem Cities’ worst murderers were all possessed by Sutter; it’s easier to grapple with the idea of one historically evil killer than several. Also, there’s something really darkly comedic about the idea of a ghost wanting revenge on the man who killed him, only 150 years have passed and the bloodline he’s trying to end now consists of over 1,000 names. I might steal the idea for a screenplay. You just have to sympathize with the ghost a little, he’s been slapped in the face by Fletcher so many times (occasionally with a pickax).

Deadman is almost too useful a tool for Barry. Interrogation be damned! Deadman can possess whoever he wants and experience any moment of their life first-hand. I’m pretty sure no evidence collected through this method would ever hold up in court (though I’ve heard Florida does have some pretty weird possession laws), but still, he’s making things too easy for Barry — a detective who can already read through an entire library in a single panel. The real crime here is that Deadman is reduced to little more than a convenient device for delivering information about spirits. Nothing says “fun superhero team-up” like scouring the Hall of Records, and Deadman spends most of his time spouting clunky-sounding generalizations, lines like “All evil spirits want something” or this winner:

I don’t envy Patrick Zircher. Flash artists are usually tasked with showing things moving super fast, but this issue adds a degree of difficulty by having ghosts going into or out of people nearly every page. Zircher does an admirable job; I could feel the ghosts fists forcing their way into Barry’s torso. Somewhere between a man and a skeleton, Sutter’s ghost is incredibly scary, the type of monster usually reserved for worst ghost stories. Then again, that’s just what he is: the subject of a ghost story. Even Barry has a hard time believing the Keystone Killer is real. My favorite moment of the issue comes when Barry is recalling the local legend of a ghost miner, and we see Barry’s childhood projection of such a creature, which seems to still exist in some deep recess of Barry’s mind. 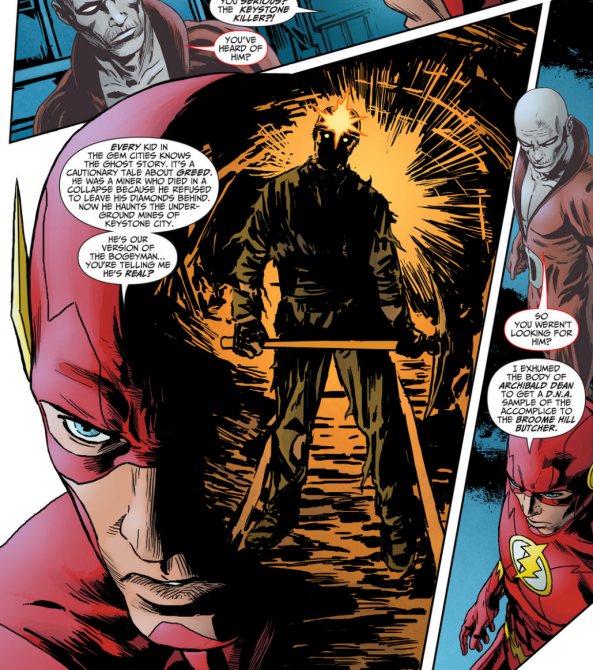 Drew, I’m still enjoying the new direction Flash is taking, but I’m not jazzed with all of Buccellato’s choices. Deadman had too many answers and too little personality. All of the emotional beats were such afterthoughts they probably should have been scrapped from the issue altogether. But there’s something about a murder mystery 150 years in the making that gets me all giddy! I mean, the Flash is chasing a ghost. Literally. Should we even be allowed to complain about that?

Drew: You know, this isn’t the first time I’ve seen the Flash and Deadman interact — Barry actually had a two-issue cameo in Justice League Dark back when Dr. Destiny was terrorizing New York. It was fun to see All-American Hero Barry Allen bouncing off of the dysfunction of that team — he illuminated that series’ dynamic by offering a contrast. Deadman’s presence here fulfills a similar role, but the effect is decidedly less flattering. That is, the dysfunction his presence reveals in this issue isn’t nearly as endearing.

I’ll admit to discomfort around the idea of Barry interacting with ghosts, though I’ll also acknowledge that my discomfort is largely indefensible. I get that the speed force is essentially magic, but I somehow see The Flash as a sci-fi title. Or at least a meat-and-potatoes “good guy catches bad guy” superhero action title. Ghosts are fine for a Halloween story, but they just don’t fit the genre tropes this series otherwise trades in. Again, that may be my problem, but it prevents me from fully embracing this arc.

On a more structural level, I was a bit disappointed in the mystery aspects of this issue. I was thrilled to have Barry getting down to some detective work last month, but as Scott pointed out, the mystery is largely solved by the middle of this issue. I get that they still need to figure out where the killer will strike next, but the detail that those records are mysteriously missing was so unceremoniously introduced, conspicuously forgotten, and then predictably remembered that there was basically no room to guess what was going to happen. There were a few too many of those heavy-handed expository moments in this issue for my taste. Take that panel of Deadman reading out of that book — it’s a wonder that he didn’t add that Sutter’s real name is Checkov, and that his axe really a gun. With every important detail hammered so forcefully, there’s never any doubt as to what we should be paying attention to, effectively robbing the story of any real mystery.

Unfortunately, that lack of mystery carries over to the character work. We were intrigued last month by Frye’s suspicious actions regarding Barry, his mother, and the Broome Hill Butcher, but this issue doesn’t advance that thread at all. Indeed, Frye’s only scene is basically him just reminding us that he’s hiding something. 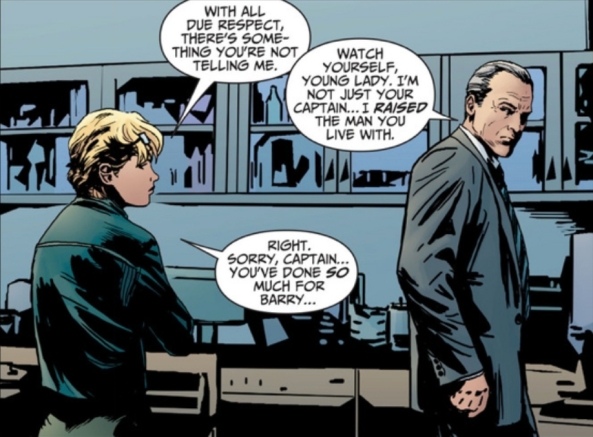 For all of my gripes with the story, I absolutely loved the art. Zircher is firing on all cylinders — the acting is superb across the board, the art itself is gorgeous (like that image of Barry remembering Scott included), and I can’t get over how effective his layouts are. I was particularly impressed with the “interrogation” scene, where we get Sutter’s back story. Zircher delivers the cold, hard facts in a spread of narrow, vertical panels, giving the sequence a dispassionate, halting effect, but switches to horizontal, almost panoramic panels in the next spread, as the story turns to the more emotional details of betrayal. 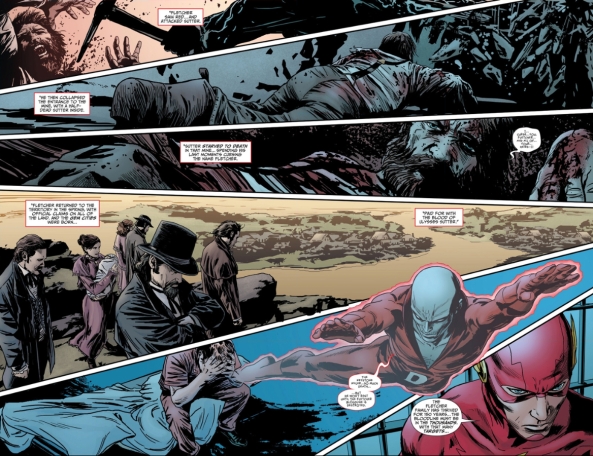 These widescreen layouts require us to take in the scene from left to right, revealing the drama of Fletcher’s attack, Sutter’s entombment and promise, Fletcher’s ill-gotten city, even lending a sense of motion to Deadman exiting Holden’s body. Under normal circumstances, this kind of effective layout is just smart, but after setting us up for it with the vertical panels on the previous layout, it’s a stroke of genius.

With all of that praiseworthy art, my complaints about the story may not amount to a whole lot — basically, I’d pick up the next issue even if it was written by a spambot. Still, Zircher’s demonstration of his prowess makes it clear exactly how thin the story was here. I’ve come to expect more from Booch, so who knows? Maybe he’ll surprise us with the reveal of what Singh did. Or maybe the proof is in the pickax.