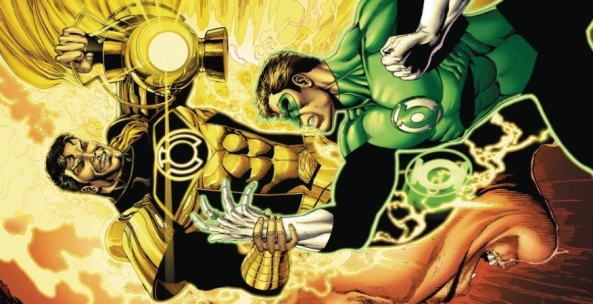 Green Lantern is a mythological big bang, constantly expanding outward into space at an alarming rate. Hal Jordan and the Green Lantern Corps writer Robert Venditti usually participates in these kind of elliptical expansions that loop back around on information or concepts that readers are already familiar with and then venturing out further into the undefined depths of space. That’s how Hal’s relationship to the New Gods of New Genesis was fleshed out, that’s how Soranik Natu temporarily re-joined the corps before betraying them and defecting with her father’s evil army. But those are whirling galaxies of mythology, and in issue 30, Venditti and artist Patrick Zircher bring that same cyclonic energy planetside.  END_OF_DOCUMENT_TOKEN_TO_BE_REPLACED

Drew: What kind of themes do you expect of a Superman story? Morality? Alienation? Hope? Love? Over his 75+ year history, Superman has come to represent many ideas beyond that handful of suggestions, but those might serve as a reasonable starting point for the character, describing at least the ballpark he tends to play in. With Action Comics 958 — an issue by its very numbering necessarily recalls a good chunk of Superman stories — Dan Jurgens and Patrick Zircher make a compelling case for voyeurism as a key element of the Superman mythos. END_OF_DOCUMENT_TOKEN_TO_BE_REPLACED

Michael: Mark, I’ve had a problem lately — the impending arrival of whatever DC Rebirth shapes up to be has been coloring my read of nearly every DC book. The creative behind-the-scenes shuffle that must be going on fascinates me — creators rushing their stories to conclusions earlier than they anticipated, etc. Superman 50 is the conclusion of Gene Luen Yang’s run on the book. And while it is an awkward, frantic, and deflated conclusion, it kind of seems like that’s what Yang intended all along? END_OF_DOCUMENT_TOKEN_TO_BE_REPLACED

Michael: Interlude: from Medieval Latin word interludium; “inter” (between) and “ludus” (play). Interludes are curious animals; they often serve as a bridge between stories in an ongoing narrative but can simultaneously be standalone anecdotes. Part prologue, part origin story, Green Arrow 44 serves as such an interlude. And like many interludes, it provides some setup for the overall plot but also exists as its own island of a story. END_OF_DOCUMENT_TOKEN_TO_BE_REPLACED

Patrick: Guys, I want to start this off by apologizing for the typo in the header: it’s “Futures End” and not “Future’s End.” That’s my bad, not Shelby’s. I want to keep it there for posterity and because it speaks to the general confusion regarding this title. The full name is “The New 52: Futures End.” As a weird consequence of that name, it’s the only series that takes place in the New 52 that doesn’t bear this logo on its cover:

END_OF_DOCUMENT_TOKEN_TO_BE_REPLACED

Scott: As a kid, I didn’t enjoy ghost stories very much. I did my best to avoid them, but sometimes, late at night at a slumber party or around a campfire, it was impossible. I endured; listening wasn’t the hard part. In the moment, whatever shock or gore the stories contained didn’t affect me much. It was the aftermath, the lingering psychological torment — the fear, however irrational, that maybe the deranged killers they told these stories about might actually exist. In The Flash 28, Barry Allen is confronted with my greatest fear: the murderous monster from his childhood ghost story is real. A ghost story combined with a detective story, this issue is as fun as you can imagine, even though all of the elements don’t mix together quite right.
END_OF_DOCUMENT_TOKEN_TO_BE_REPLACED

Drew: As a society, we emphasize “truth” above all else — even as we often acknowledge the necessity (or at least convenience) of small lies. We tell lies to beg off of social invitations, or to save face after doing something stupid — I once even made a fake email account just to avoid having to explain a too-complicated truth. These lies are generally pretty transparent, but we feel compelled to maintain the facade because “actually, your band sounded terrible,” just feels cruel. Of course, all of those lies flying around make it possible for people to get a false sense of themselves (or at least a false sense of how interested coworkers are in looking at pictures of their cats), that is, those little lies can become a bigger truth, upon which someones own sense of self might be based. Its those kinds of truths that seem to be in play in The Flash 27, as Barry begins to chip at the finish of his candy-colored world. END_OF_DOCUMENT_TOKEN_TO_BE_REPLACED

Drew: We’re reminded over and over again that it isn’t the powers that make superheroes heroes. Anytime a newly powered teenager or well-meaning techno-geek runs into the established heroes, they’re given a speech about the great responsibility that comes with their powers. But what about the other side of the coin? What makes a supervillain a villain? The Rogues have always been a little less villainous than, say, Batman’s baddies, but their thievery has always put them on the wrong side of the law. The Crime Syndicate’s arrival has shifted the moral landscape significantly, placing the rogues firmly on the side of angels, as Rogues Rebillion 1 finds them protecting the Gem Cities — much like Flash would if he were there. END_OF_DOCUMENT_TOKEN_TO_BE_REPLACED

Today, Patrick and Scott are discussing The Flash 23.3: Rogues, originally released September 18th, 2013. This issue is part of DC’s Villain Month. Click here for our coverage of Villain Month.

Patrick: I wouldn’t say that Captain Cold is an alcoholic, but he does drink. Occasionally, he drinks to escape, but he also drinks to celebrate. It’s a dimension of who he his, but it doesn’t define him, which is so rare in comics. If someone’s a drinker, that’s probably some horrible vice that pigeonholes them into being abusive, inattentive or otherwise absent. Hell, Taylor and I just posted a piece of Casey Jones’ alcoholic father in Teenage Mutant Ninja Turtles yesterday. Beer is a consistent factor in this issue, it sees Cold through despair, it helps him unwind, and it’s even a sign of hospitality. Cold’s boozing habits are nuanced and resist simple definition, just like the man himself. END_OF_DOCUMENT_TOKEN_TO_BE_REPLACED