Retcon Punch is on Summer Hours, which means we’re going to be writing fewer in-depth pieces for the month of August. But we’re addicts at this point, so we need a place for our thoughts on all those comics we can’t stop reading. Today, we’re discussing Midnighter 3, Detective Comics 43, Batman Beyond 3 and Green Lantern 43.

Patrick: Midnighter’s whole schtick seems to be based around his ability multitask. Actually “multitask” might be underselling it – “omnitask” might be more accurate. He can take in all the information and process it and determine the best course of action no matter the odds against him. Writer Steve Orlando might be a little bit too good at channeling the character as he packed issue 3 with an amount of incident that only Midnighter himself would be able to process. Not only is there an active kidnapping/experimenting caper that Midnighter foils (split up into past and present sections) there are two scenes about Midnighter’s current social life, and another about him splitting up with Apollo. And, then — just in case you’re feeling totally on top of the story — the issue ends with foray into Grayson territory, as Midnighter confronts Helena and Dick. The resulting mega-story is tricky to stay on top of, and Aco’s presentational artwork doesn’t do a lot of handholding to make the storytelling any clearer. That’s not really a jab against Aco; what he loses in clarity, he more than makes up for in dizzying feats of visual effectiveness. I may not be able to track how Midnighter wipes the floor with Multiplex, but I do know that Midnighter’s perspective on it is fucking awesome.

The whole thing is so disorienting that I don’t ever much feel like Midnighter himself. Instead, the reader is cast in the role of the witness to Midnighter’s experience – like the little girl he rescues, or Apollo or Matt. We can be overwhelmed and a little unclear in where his confidence comes from, but it makes his eventual victories all the more magical.

Michael: Well that answers that. In the last issue, Patrick and I were discussing the mysterious phone number that Bullock handed off to Montoya to investigate. Turns out it was a number that had been calling Yip, our now confirmed resident dirty cop. It looks like Yip has been working with our Day of the Dead circus fiends… who have been working with Joker’s Daughter (sigh.) Bullock and Montoya race to rescue the Batsuit-less Gordon only to find that he barely fought off his masked assailants. The new Batsuit is powered by a fusion reactor — because of course it is — which has been stolen by our villains and later powers an epic Jokerbot. Bullock confronts Yip with the fact that he knows that she is dirty and instead of admitting to her crime she responds with a firm uppercut. I’m not 100% positive that Yip’s being dirty is so cut-and-dry, but we’ll see. When Bullock is at his wits’ end, we see the echo of the Detective Comics DC Sneak Peak where he asks Gordon to help kill his partner. There’s something so comical about this scene to me; and not in a bad way. Fernando Blanco draws Gordon in the full mech Batsuit sans-head, as if he’s a mascot about to start his shift at Disney World – which is an interesting way to think about Bat-Gordon.

I think that Fernando Blanco does an excellent job on this issue overall. Scott Snyder wisely reintroduced the blimps from Batman: The Animated Series with the new Bat-Gordon status quo. My favorite page in Detective Comics 43 is where Blanco takes the blueprint layout of the blimp and guides us through parts of it, scene-by-scene. It reminded me of how Wes Anderson shoots his films – especially The Life Aquatic with Steve Zissou. Another thing that Blanco excelled at was his Jim Gordon scenes. I am pleased that Brian Buccellato gives Bullock the spotlight instead of Gordon, seeing as how Gordon essentially has his own book in the regular Batman title. In Detective Comics, Jim is more of a side-character with internal problems that are less pronounced than Bullock’s, but no less important. Gordon is pretty miserable being Batman – he’s gotta eat all of that healthy shit and worst of all: no cigarettes. I dug these quiet scenes right before Gordon exited his balcony onto the Bat-blimp, because again – of course. My only question is this: as Batman, does Gordon still have to wear a tie and trench coat or is that just an old habit?

Mark: There’s a lot of power in branding. Put a familiar, beloved label on something and our desire for it increases immensely. But with that label comes certain expectations. When we buy Coca-Cola we expect the can to contain Coca-Cola, and when we read a Batman Beyond comic we expect there to be Batman Beyond inside. Three issues in, I think I’m done with  Batman Beyond.

The fun of Batman Beyond is in Bruce Timm’s visual style, the character of Neo-Gotham, the attitude of Terry McGinnis. Batman Beyond 3 contains none of those things. Instead, it continues the drab story of Tim Drake in a generic Brother Eye-controlled metropolis. Captured by Brother Eye for interrogation, Drake wills his way out of the drugs’ control and fights Inque, and Brother Eye’s hoards, to escape. But stripped of everything that made Batman Beyond what it was, the question is why is this being sold under that brand? I feel like it does a disservice to the work of Dan Jurgens and Bernard Chang. The story is a continuation of The New 52: Futures End, which doesn’t fit the tone of Batman Beyond at all, but as someone who enjoyed Futures End for what it was there are interesting ideas here. None of that was spectacular, but it gets the job done.

The problem is that it’s not Futures End, it’s Batman Beyond. That’s the label DC chose to slap on this book, and it carries the weight of those expectations. This isn’t what I want out of a Batman Beyond title, so I’m out for now.

Michael: Poor Black Hand: dude can never catch a break! The perennial outcast/metaphor for ineffective man-children once again finds himself unable to properly use his powers; with his Source Wall Midas touch power running amuck. Meanwhile Hal and his luscious hair decide that it’s time to stop and smell the roses – unfortunately the rose garden he’s taking in is also being occupied by Relic. Hal tries to disguise himself and ask Relic what he thinks happened to the Corps and why his friend Virgo’s planet was reduced to Source Wall stone. Unfortunately Hal’s cover is blown when Virgo activates the gauntlet in an attempt to help Hal and they need to get the hell out of dodge before Relic  strikes. The issue ends with the mysterious “Gray Agents” trailing down Hal and leaving a fiery path in their wake.

I’m not ashamed to say that Robert Venditti’s Green Lantern run has left me thoroughly underwhelmed. So while I’m still not completely onboard with “Hal Jordan: Renegade,” I can attest to feeling the high stakes when Hal is trying to pump Relic for information. This sequence took up the majority of the pages of the book and its tension was so well-choreographed by Venditti and artist Ethan Van Sciver. Virgo picks up the gauntlet with the intention of saving Hal, but as a reader I was losing my mind in fury – in the best way possible. It was like when Abu grabs that blood-red ruby in the Cave of Wonders in Aladdin – as an audience member you’re like “Goddammit Abu there was ONE rule!” I think there’s a difference being mad at a character and being mad at a creator. There are so many instances where I can lay the blame at a creator for a poor story choice. Instead, this is a writer utilizing a character to make a stupid choice for the sake of story. Van Sciver gives Relic the monstrous size we have come to know the character for, and when he realizes that he’s been duped it’s like when the T-Rex finds its prey in Jurassic Park. 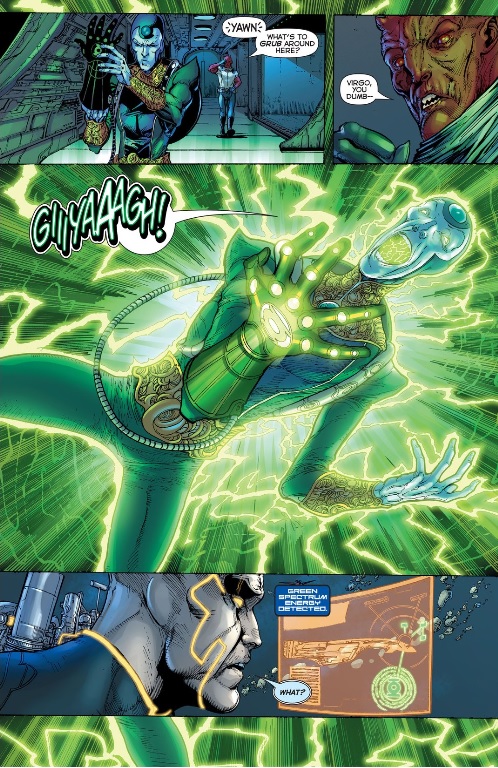 Another thing I found equally frustrating and fascinating about this issue was Darlene’s HAL-like moment of self-awareness. As Hal’s means of transportation, Darlene has presented herself as a sassy source of comic relief for Green Lantern readers. She reminds me of Hannibal Lecter (because I’m obsessed with that show and you should be too) in that she is just curious to see what will happen next – even if it endangers the lifeforms that surround her. The last thing I’ll say is this: even Ethan Van Sciver’s glorious pencils won’t make me like Hal Jordan’s stupid new mop-top.