This is the first installment of Batman: White Knight where Batman has really felt like Batman to me. Sean Murphy digs into the character’s nuances in a way that he hasn’t in previous issues. This is the Batman who will buy Harley Quinn a dress and support her sincere, if bungled, efforts to reform, because under his gruff exterior he truly does care about people, even villains. This is the brilliant detective who has managed to piece together a good 95% of Neo-Harley’s plan when most of the other heroes barely even realize she has a scheme at all. Even Batman’s failed attack on Neo-Harley that closes the issue — which results in the destruction of one of Gotham’s bridges and Batman becoming a fugitive — is motivated by Neo-Harley’s personal attack on him and a desire to protect his family, not wild, unreasonable vengeance. This isn’t the gruff madman of previous issues — this is a complex Batman who still wants what is best for Gotham City. He’s just blinded by his hatred of the Joker. END_OF_DOCUMENT_TOKEN_TO_BE_REPLACED 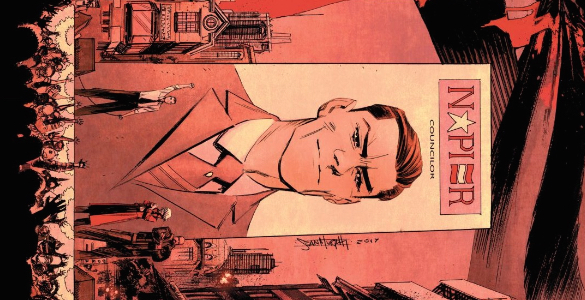 Despite the series being at its halfway point, I honestly don’t quite know what to make of Batman: White Knight. I still believe that Sean Murphy is a tremendous artist, but other than that, my feelings about this series are mired in uncertainty. It seems that some of that uncertainty is purposeful, inherent to the premise, but some of it feels very unintentional and frustrating. I wish it was easier to tell the difference. END_OF_DOCUMENT_TOKEN_TO_BE_REPLACED

Mark: Well…huh. Is that all there is?

Writing a mystery story in any medium is an unenviable task. It’s basically impossible to nail the landing. For my money, the ideal solution to any mystery is both surprising and logical. Once the solution is revealed, the audience wants to see that the answer was hiding in plain sight all along. Writing a satisfying conclusion like that is nearly impossible. It’s why when something like The Sixth Sense comes along it is so successful. But M. Night Shyamalan learned the wrong lesson from its success, thinking that audiences craved a “GOT YA” ending. And it’s why his other films that attempted a twist failed. Sure, the twists are surprising…but they’re meaningless and add no additional understanding to what came before. So after two (and a half) strong issues of Peter J. Tomasi’s Detective Comics mystery, we reach the end of The Bronze Age arc and, again, I ask: is that all there is? END_OF_DOCUMENT_TOKEN_TO_BE_REPLACED

Michael: Jim Gordon has been Gotham’s Dark Knight since June and with Bruce descending into the Batcave in the pages of Batman, it seems that Gordon’s rooftop days are nearing their end. That kind of bums me out to be honest. While Snyder’s work on Gordon in Batman has been bombastic fun, I’m not sure that he’s had enough time to engage in the wide array of Batman capers. Enter Pete Tomasi’s three-part story arc: “The Bronze Age.” END_OF_DOCUMENT_TOKEN_TO_BE_REPLACED

Retcon Punch is on Summer Hours, which means we’re going to be writing fewer in-depth pieces for the month of August. But we’re addicts at this point, so we need a place for our thoughts on all those comics we can’t stop reading. Today, we’re discussing Midnighter 3, Detective Comics 43, Batman Beyond 3 and Green Lantern 43.

END_OF_DOCUMENT_TOKEN_TO_BE_REPLACED

Patrick: Creators on long-running comics are always trying to shake up the status quo. That can be exciting for fans, who love (or love to hate) seeing their favorite properties monkeyed with. And eventually, there’s always the added reward of the return of the original status quo — the status quo ante — which reinstates all our old standards. I try not to be a cynical reader, but sometimes I can’t escape the idea that characters are changed more or less arbitrarily in order to generate conversation and enthusiasm about a series. It’s not like this is bad — change means growth, and I’d love for superhero comics to embrace more growth — but the tendency to revert to a status quo ante makes any attempt at growth feel impotent. Bruce Wayne is dead. Sure. New status quo. He’ll be back. Status quo ante. But what about everyone caught in Batman’s periphery? They have to change too, but there’s nothing forcing them to change back. Detective Comics 42 hovers around this periphery, challenging and pushing characters that may actually be capable of growth. END_OF_DOCUMENT_TOKEN_TO_BE_REPLACED

Michael: Batman as an idea has taken many different meanings in the character’s 75 year history: the ultimate mortal, Bat-god and arguably comics’ gritty landscape architect, to name a few. Above all else we have come to learn that being Batman is a sacrifice; you have to commit yourself to the cape and cowl, body and soul. We’ve seen how this sacrifice has affected many facets of Bruce Wayne’s life as well as the other heroes who have taken up the mantle of the bat. Scott Snyder and Greg Capullo place Jim Gordon in that honored position and explore what exactly that sacrifice means for the former police commissioner. END_OF_DOCUMENT_TOKEN_TO_BE_REPLACED

Mark: On a week to week basis, comic books are junk food. Most everything that comes out is disposable, easily forgotten. While occasional stories and arcs will make a mark, for the most part Batman’s latest encounter with a violent psychopath quickly becomes only of interest to the most diehard continuity enthusiast. These are the same stories that DC has been telling for basically 30 years, and they work. They’re engaging. They sell a dwindling number of books. Detective Comics 40 ends an arc built around hatred, revenge, and the murder of children. It’s another take on the classic Batman formula: a new threat emerges in Gotham, Batman tries to control the threat, Batman loses control and order in Gotham is threatened, Batman confronts the source of the threat, almost loses, but through strength and determination, Batman defeats the threat. Mad libs “threat” for the name of any member of his rogue gallery, and you’ve got yourself a Batman story. END_OF_DOCUMENT_TOKEN_TO_BE_REPLACED

Mark: Of all the Batman movies, Batman Returns remains my favorite. It’s probably the darkest Batman film yet made (I mean, it opens with parents throwing their baby in the sewer. Opens!), but it also has a sense of humor and style that the oppressively serious Christopher Nolan adaptations lack. One of the things that makes the movie pop is the decision to set the action at Christmastime. Even all lit up for the holidays there’s no place as terrible as Gotham City, and that contrast adds a dark mirth to the proceedings. With the holiday season once again upon us, it’s the perfect time to revisit Gotham at Christmas. After a two month airport diversion, creative team Brian Buccellato and Francis Manapul are back and Detective Comics 37 jumps us right into the thick of Gotham on Christmas Eve. Guess what? Things are not great. END_OF_DOCUMENT_TOKEN_TO_BE_REPLACED

Patrick: One of the bigger driving forces within Batman Eternal is Carmine Falcone’s desire to rid Gotham of “freaks” like the Penguin and Professor Pyg. In effect, Falcone is trying to drive all the fantastical elements out of Gotham City — whether they’re heroes or villains doesn’t seem to matter much to him. He’s even gone so far as pit the police directly against the Bat Family, furthering the absoluteness of this idea of fantasy vs. reality. But there’s a point that Falcone is missing — or willfully ignoring: everyone engages in a little bit of fantasy to get what they want. What Jim Gordon experienced in the train station – was that fantasy or reality? Covering up a gang war: fantasy or reality? Issue 13 brings that dichotomy into stark relief, showing how embracing fantasy can be equal parts advantageous and horrifying. END_OF_DOCUMENT_TOKEN_TO_BE_REPLACED