Spencer: What, exactly, is the purpose of these “Rebirth” one-shot issues? The most successful installments have managed to successfully introduce new status quos while also launching head-first into the series’ first stories, but other one-shots have been a bit too preoccupied with untangling complicated knots of continuity to do much else. Interestingly enough, The Flash Rebirth 1 falls squarely into the middle of that spectrum. While the issue does give us a good look at Joshua Williamson and Carmine Di Giandomenico’s take on Barry Allen, it also spends a lot of time dealing with other stories that may or may not be related to upcoming issues of The Flash.

Specifically, The Flash Rebirth 1 revolves around the reunion of Barry and the Pre-Flashpoint Wally West that we saw in DC Universe Rebirth 1, even repeating a few panels verbatim. It’s not a complete retread, as we not only get to see more of Barry’s perspective on the events this time (as opposed to Wally’s), but also follow this plot past Universe‘s conclusion, yet this issue’s story still feels more like an extension of Universe than the expected prologue to The Flash.

Here’s where I have to admit that my reading is biased a bit by the fact that I’ve seen the solicits for upcoming issues. Williamson’s first Flash storyline is supposedly about Barry training an army of suddenly-Speed Force-powered citizens, and I’d be lying if I said that I wasn’t looking forward to seeing the beginning of that storyline in this issue. But who knows? Maybe this issue was never intended to be a preview of plots to come? Or maybe The Flash will also be following up on the plot points introduced in Universe and repeated in this issue? Either way, I don’t feel like revisiting the events of Universe was the most exciting path for this prestigious issue to take.

That said, while I may not be totally sold on the direction of the plot, Williamson and Di Giandomenico have me quite excited about their take on Barry Allen, and on the Flash mythos as a whole.

Out of all of DC’s heroes, Barry Allen’s always been the one who’s reminded me most of Superman — he just wants to help people, in ways both large and small. I love that Williamson has captured this aspect of Barry’s personality, and that he realizes that the Flash (no matter who is under the cowl) works best as a hero who is connected to the people he protects.

I also adore this spread for similar reasons:

If Barry and Wally’s relationship is going to be important to this series going forward, then it’s a good thing that Williamson’s nailed it. Wally admires Barry more than anyone, and DC in general had a habit of putting Barry on a pedestal when he was “dead,” but Barry’s too humble to believe his own hype. He’s energized by the people who love him even more than he’s energized by the Speed Force. The more isolated version of Barry who’s existed in the New 52 up ’til now was never a failure — in fact, Manapul and Buccellato penned a classic run with the character — but it is nice to see family and relationships and connection become an important part of the Flash mythos again. I only hope this extends to more of the supporting cast (Iris, nu-Wally, even Singh and Piper as this issue suggests) as the title continues.

Di Giandomenico’s art and Ivan Plascencia’s colors have also got me pumped for this run. The orange and yellow energy trails Plascencia leaves in Barry and Wally’s wake are not only a perfectly chaotic and elemental representation of the Speed Force, but play a vital role in creating the illusion of speed on the page.

This just looks like a Flash book, and Di Giandomenico’s angular, kinetic style has much to do with that as well; the art is just full of energy. Di Giandomenico throws in some smart storytelling choices too, such as that early splash that uses Speed Force energy as panel borders, that shot where Barry’s shadow forms Flash’s silhouette, or that incredible spread of Barry and Wally racing up a building that I posted earlier in this piece. I love the symmetry of that image, the joy Di Giandomenico captures in their faces, even their very different running stances.

Unfortunately, Di Giandomenico’s characters also sometimes suffer from some wonky anatomy and awkward poses. While this can sometimes be distracting, though, there are other times where it works to the story’s advantage, whether intentionally or not. 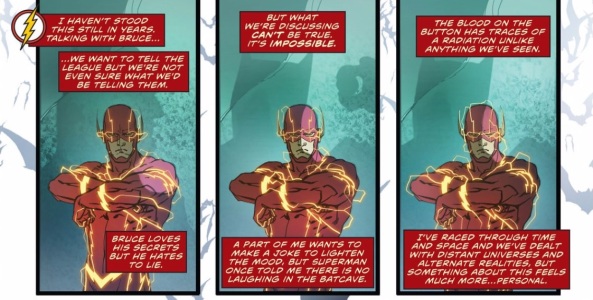 Barry’s pose here, for example, is incredibly stiff and unnatural, but it’s that very awkwardness that drives the point home; Barry is uncomfortable staying this still for this long, and that absolutely shines through in the art.

Ultimately, I feel that, other than Batman, the Flash is the major DC character with the least need for a “Rebirth” overhaul — the previous run could be hit-or-miss, but it did no damage to the character or the mythos. All The Flash needs is some exciting, character-based storytelling to get back on track, and based on what I’ve seen in The Flash Rebirth 1, it certainly looks like Williamson and Di Giandomenico could deliver exactly that. I only wish they had been able to show us more of what their run has in store, instead of focusing so much space on tying into Universe; I think that could’ve been a lot more exciting.

Of course, I am the guy far more interested in “Rebirth” as an initiative than “Rebirth” as an actual plot, so maybe I’m just blowing smoke here. I dunno, Michael, what’s your take on this one?

Michael: In my write-up for Superman Rebirth 1 I asked the same question as you Spencer: what are these Rebirth one-shots supposed to be? Series prologue? DC brand synergy? And just like Spencer my answer comes down to: a little of both. I think that the Rebirth one-shots are a necessary evil – they casually bookend recent DC events and lay some groundwork for the future without hijacking a #1 of a new ongoing. While I’ve enjoyed most of these Rebirth one-shots, I’m more excited for each creative team to take control of the book and see what they’ve got planned. All in all The Flash Rebirth 1 is a good start to Williamson and Di Giandomenico’s Flash run – albeit a little muddled.

The Flash Rebirth 1 does the typical bit of exposition that titles of its kind do: the hero is introduced, we get a truncated lesson in the character’s history, and we move forward to the new story. Williamson catches the casual reader up to speed with Barry’s origin and throws out this:

“Lowly forensic scientist”? Come on man! I typically give grief to the CW’s The Flash for using the phrase “I was just an ordinary forensic scientist,” but lowly? I don’t think forensic scientist is something you can just snooze your way through school to become – not to mention that Barry Allen is typically lauded for his skills in that field. It’s not a critique against the quality of Williamson’s writing but rather a compliment on the impressive character of Barry Allen: he’s got a good heart, super powers AND a pretty amazing job. Credit where credit is due, you guys.

While I was rereading this issue I imagined how awesome it would be to have the ongoing The Flash comic be a title that starred both Barry Allen AND Wally West. That brief flight of fancy was just that however, as Wally’s continuing adventures will take place in the pages of Titans. This all leads me to the question of “why Wally West?” I know the bulk of the answer to that question – Wally symbolizes the legacy and heart that has been missing from The New 52. So I’ll retool that question a bit – “why does Wally come back to Barry?” Barry was the only one who could tether Wally to reality while he was trapped within the Speed Force; we know it’s because Barry meant so much to Wally, but what does it mean for Barry? What exactly does Barry’s “Rebirth” entail? From the story provided here it doesn’t exactly seem like Barry realized that something (Wally) was missing from his life. He only seems to be affected by the hangover visions that the Speed Force is presenting to him as though they’re some kind of warning. I’ve never liked the “Barry’s mom got murdered” retcon – it’s made Barry too brooding. My hope is that Wally and Rebirth will make him lighten up a bit.

I’m pondering what remembering Wally actually does to Barry. He remembers the bullet points and overall importance but he doesn’t seem to remember it all like Wolverine does in the altered timeline of the X-Men: Days of Future Past movie. It reminds me of how I kept hurting my brain trying to figure out what parts of Batman continuity did and didn’t exist anymore in The New 52. For a guy who has been trapped in the Speed Force for an indeterminate amount of time, Wally is a very patient and understanding guy. If I escaped from a prison outside of time and space I’d want to fix my world back to normal ASAP; Wally, however, is a little wiser than me. He stops Barry from running to Iris because he doesn’t think it will end well and he’s just not ready for another letdown like the one he had with Linda.

Spencer mentioned that Barry was put on a pedestal when he was dead, which is how I got to know him – through Wally’s eyes. Without Wally West I’ve not been as interested in Barry Allen, so I’m hoping that Wally’s return and the Rebirth direction will give him some more depth and drive. Hopefully in the future Barry will be more interested in spending time with his long lost-protege than hanging out in the Batcave trying to solve the Watchmen problem.