Look, there are a lot of comics out there. Too many. We can never hope to have in-depth conversations about all of them. But, we sure can round up some of the more noteworthy titles we didn’t get around to from the week. Today, we discuss Star Wars: Poe Dameron 12, East of West 32, Kill or Be Killed 7, and Sex Criminals 17. Also, we discussed Archie 18 on Monday, and we’ll be discussing American Gods: Shadows 1 on Tuesday, and Injection 11 on Wednesday so come back for those! As always, this article contains SPOILERS.

Michael: I’ve noticed a lot of vitriol for C-3PO amongst Star Wars fans these days. Maybe it’s an attempt at a postmodern act of rebellion against a parental figure of the original trilogy, maybe it’s because they’re tired of 3PO harshing everyone’s buzz. Charles Soule has been making a case for the old stick in the mud by making him a “spymaster” in the pages of Star Wars: Poe Dameron.

Star Wars: Poe Dameron 12, or: “Let find something for the droids to do.” Agent Terex and his goons have Poe, C-3PO BB-8, and N1-ZX cornered in a cave after Poe’s X-Wing crash landed. In the opening pages Poe rescues C-3PO from enemy fire by hoisting him over his shoulders, inadvertently implying some level of superhuman strength.

While Poe and N1-ZX argue over N1’s lack of earning his keep, C-3PO and BB-8 decide to defend their allies from Terex and his Rancs. Phil Noto takes advantage of a fun trick BB-8 used in The Force Awakens and has the little ball droid swinging around the cave like he’s Spider-Man.

C-3PO on the other hand realizes that the best way to help his friends evade Terex is by using his most valued function: communication.

In the end, Terex removes 3PO’s memory unit to take back to Snoke, which leads me to wonder why Poe didn’t do the same with N1-ZX — who refuses to be of any help. This wasn’t exactly a game changer in the series but it certainly put 3PO in the hero spotlight.

Patrick: Goddamn: reading East of West has turned into a soul-grinding terror. The hellscape of amoral political machinations feeling less and less fictional and Hickman’s examinations of the necessity of evil in power feeling less cute than ever before. It’s still a stunning, effective work of post-apocalyptic political horror, I’m just personally having a harder time letting its veil of fantasy protect me. When Archibald pithily spits out “Justice is what the strong do to the weak” it is hard not to choke on that truth.

It’s hard to say what Hickman is getting out of rubbing our noses in it. But there is an image that his co-storyteller and artist Nick Dragotta makes sure to rub our noses in just as thoroughly: the cigar.

Archibald always pulls one of these bad boys out when he starts to deal with one of his political or physical rivals. It’s not rule, but most of the time we see this thing, Dragotta is careful to obscure the end of it, either by hiding it in Archibald’s jacket, or more often by terminating it off-panel. It’s a symbol of his power, and it usually extends as far as the reader’s imagination allows to it extend. This is nothing so trite as the Freudian assertion that the cigar is a penis — Hickman gets in front of that one early with an exchange about the difference between the “carrot” and the “stick.” Archibald operates by making one look like the other: make your subjects believe their punishment is a reward. It’s the same attitude he brings to diplomacy, as demonstrated by his meeting with New Orleans.

Of course, that doesn’t mean he’s above abject, outright cruelty either. That’s part of what makes this corner of East of West so hard to get through. Archibald tears through The Ranger and his robot-dog, using a weapon armed with the eye of answers to cut him down without so much as breaking a sweat. That leaves Bel Salomon to Archibald’s mercy… which… yikes, man. Ugly shit ahead.

Kill or Be Killed 7 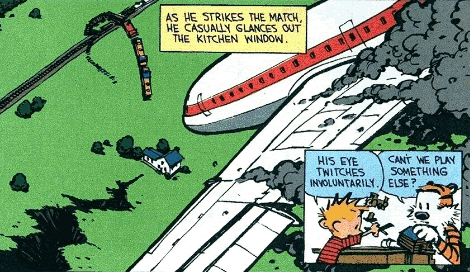 Drew: While I doubt I could ever pick a favorite Calvin and Hobbes strip, the punchline above has always struck me as particularly illustrative of Calvin’s imagination. Where other six-year-olds might be happy to have a toy train crash into a miniature building, Calvin takes that appetite for destruction to excessive heights, piling on a falling airplane, a rupturing fault line, and a gas leak, somehow heightening the tension while making poor Farmer Brown’s fate all the more inevitable. That Calvin is overdoing it is the joke, but goosing a heroes peril by pitting him against multiple, independent forces is inarguably effective (though usually by making escape at least a little more possible than Calvin allows for here). With Kill or Be Killed 7, Ed Brubaker and Sean Phillips add a twist to that formula, as the new force threatening Dylan isn’t a malevolent demon/hallucination, the police trying to stop him, or even the Russian mob seeking retribution, but his dear friend and former lover, Kira.

One of Brubaker’s greatest strengths as a writer is his devotion to motivating erratic or irrational behavior in his characters. To arrive at the particular plot twist that concludes this issue, he needed to get Kira in Dylan’s closet, which in turn required that she enter Dylan’s apartment when nobody’s there, which a lesser writer might write off as general concern for Dylan. In Brubaker’s hands, Kira is as motivated by her own heavy emotional shit as Dylan, meaning we follow her on her emotionally destructive journey as closely as we’ve followed Dylan on his. Switching narrators is a profound change of pace for this series, which has been heretofore so closely narrated by Dylan (who, incidentally, doesn’t ever actually appear in this issue), but it’s a damn effective one.

Ultimately, it’s all in service of this twist: the antipsychotic meds Dylan thinks he’s getting from his dealer are actually valium, which would probably only work to make him cool with his delusions. It’s an important reveal about Dylan’s mental state, but it also introduces Kira as yet another party gunning for Dylan (albeit, this time with his best interests in mind). Of course, given the way Kira came across this information, you can be sure Dylan’s not going to take that news well, so Kira’s best intentions may not make all that much difference, anyway.

Ryan D: Patrick and Drew really got me thinking in their dynamite write-up on Sex Criminals 16. The main point which stayed with me regards how Matt Fraction and Chip Zdarsky balance the relationship of Jon and Suzie with the mythology and plot of the title — especially after such a long hiatus between issues. While number sixteen caught us up on where the two lead protagonists stand, number seventeen welcomes long-time readers back to part of the formula which made SexCrims stand out in the first place. In the tradition of issues which highlighted emerging or established characters such as Jazmine St. Cocaine/Dr. Ana Kincaid or Robert Rainbow, here we see the spotlight shone on the primary antagonist: Myrtle Spurge a.k.a. Kegelface. While the creative team focused recently more on the true character of Jon and Suzie being shown through their actions as they sexily made a list of relationship goals, now the mad scientists behind this series bring us roaring back into the world building and mythology we know and love.

Fraction and Zdarsky continue to compliment the hell out of each other. For example, Zdarsky gives readers a wonderful glimpse into the day-to-day routine of Spurge while Fraction’s gives the counter-point text showcasing that character’s internal life:

This is Spurge in a nutshell; her life seems as banal as anyone’s, but her inflated self-importance based around her sexual vigilantism drives her through the mundanity of being a receptionist, mother of two, and wife of a man who farts in his sleep.

Part of her story includes the introduction of Todd Stubaker, a “sexual criminal” who she is casing. While we only hear Todd’s story through Myrtle’s lens, her well-read but decidedly amateur psychological evaluation of the man speaks volumes of her own characterization while introducing a new character to both the audience and Jon. Remembering that “true character is revealed in the choices a human being makes under pressure” (McKee), we learn something important about Jon, though he is featured only in the last three pages: Jon still follows Spurge, despite having promised Suzie that he would not.

Considering that this issue most likely serves as part two of a six-part arc, Fraction and Zdarsky successfully continue their balancing act of relationships vs. character vs. mythology vs. plot. Add on top some lovely fan service in the form of a brilliant, I-can’t-believe-they-haven’t-done-this-yet, blatant Brubaker/Phillis-esque send-up of a splash page, and Sex Crims seems like it does and will continue to deserve high status on the pull-list.