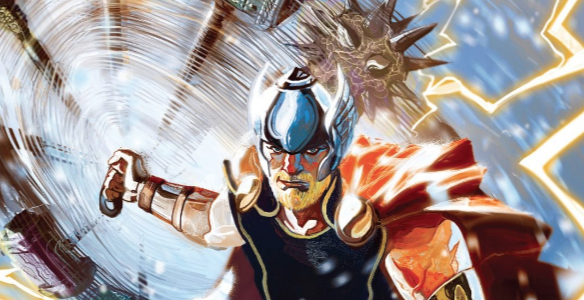 Taylor: When I’m teaching my students about tone and mood in class, my go-to lesson involves a Marry Poppins trailer. First I show them the original trailer for the movie and then I show them a trailer that Christopher Rule cut together, which makes the classic film look like a horror movie. It’s a great way of showing the kids that the same content can have a drastically different tone and mood based on how the artist presents the story. I was thinking of this as I read Thor 1, because the issue shares the same characters, settings, and even the same writer as the Mighty Thor, but it feels drastically different. It’s a textbook example of how a skilled writer can shift the tone of a story, and in this case, that shift is a refreshing change of direction for the Thor series. END_OF_DOCUMENT_TOKEN_TO_BE_REPLACED

The Mighty Thor: At The Gates of Valhalla isn’t what most readers probably thought it would be. Despite the timing of its release, it’s explicitly not an issue meant to transition from The Mighty Thor to the upcoming Thor — outside the cover, Thor Odinson doesn’t even put in an appearance — and despite the title, it spends no time in (or near) Valhalla, Jane’s Thor likewise doesn’t appear, and Jane herself has relatively little screen time. Instead, this special serves as a road map for the future of the Thor mythos, and especially for Jane’s place within it.  END_OF_DOCUMENT_TOKEN_TO_BE_REPLACED

Spencer: Big comic book events and crossovers aren’t exactly known for intimate, character-based storytelling — instead we read these stories to see dozens (sometimes hundreds) of characters all hanging out and mixing together in ways they never would at any other time. Damnation has been an interesting event because it’s the exact opposite — Donny Cates, Nick Spencer, and Rod Reis’ story works best when the scope remains small, and becomes weaker and weaker the more it tries to be an “event.” END_OF_DOCUMENT_TOKEN_TO_BE_REPLACED

Drew: Can gods be heroes? I might posit that immortality voids the noble qualities like courage and sacrifice that define heroism. To me, anyway, gods and heroes are mutually exclusive groups, which might well be the reason we created the concept of demigods — Hercules slaying the Nemean Lion is less impressive if he has infinite time and power at his disposal, and Jesus dying on the cross is literally meaningless if he can’t die. In this way, we understand that Jane Foster’s nobility comes not from her godliness, but from her humanity — from the sacrifice she can only make because she isn’t a god. But still, she was a god, at least briefly, which maybe entitles her to a bit of rest after all of that sacrifice. END_OF_DOCUMENT_TOKEN_TO_BE_REPLACED

Spencer: Jane Foster is willing to do what must be done, no matter how hard or dangerous, no matter what the consequences might be, even when nobody else can or will. It’s what makes her a hero, what makes her worthy; it’s also what brings about her downfall. The Mighty Thor 705 is the swan song our beloved Jane deserves, a beautiful, action-packed, heartbreaking issue that highlights everything that made Jane’s Thor an inspiration, everything that made her important both in-universe and out. END_OF_DOCUMENT_TOKEN_TO_BE_REPLACED

Just as surely as the sun rises in the east and sets in the west, Steven Soderbergh will reemerge from “retirement” now and again to make another heist movie. One can’t blame him for this: heist movies are fun, and Soderbergh has shown that he’s become very good at making them. Still, why is it that our thirst for these can’t be sated? Is it seeing familiar faces from different walks of life team-up? The notion of stealing for a just cause like Robin Hood? Or perhaps it’s serving comeuppance to someone who deserves it. Whatever the reason may be, the heist story is here to stay, and, as Donny Cates and Nick Spencer show, is easily transferable to the superhero genre. END_OF_DOCUMENT_TOKEN_TO_BE_REPLACED

Heroes are predictable, at least in terms of the noble qualities that define heroism. That is, while a hero’s cunning plan or stroke of genius may surprise us, that they would try to save the day — even and especially at great risk to themselves — is kind of a foregone conclusion. And no hero represents that quality of self-sacrifice better than Jane Foster, whose daily choice to wield Mjolnir to protect others has slowly allowed her cancer to advance. So that she would take up the hammer once again, even with the knowledge that doing so would surely kill her, isn’t exactly a surprise Jason Aaron and Russell Dauterman could have hoped to withhold. So instead, they spend this issue detailing exactly what that decision means to her beyond self-sacrifice, getting at just what it is that makes Jane so selfless in the first place. END_OF_DOCUMENT_TOKEN_TO_BE_REPLACED

Spencer: Since our audience has excellent taste, I’m going to assume that you’re all watching NBC’s The Good Place, right? Essentially a show about lost souls trying to earn their way into Heaven by becoming better people, one of the more interesting concepts percolating beneath the show’s surface is the idea that the rules dictating what afterlife you’re sent to are inherently flawed and unfair. It’s almost impossible to earn your way into the Good Place — only the most selfless and charitable of souls make it — leaving plenty of folks who led wholly mediocre lives (or whose greatest crimes were being born in Florida) facing an eternity of torture and punishment. I couldn’t help but think of this while reading Nick Spencer, Donny Cates, and Rod Reis’ Doctor Strange: Damnation 1, which finds the city of Las Vegas, the Avengers, and perhaps the entire world being judged by equally biased, unfair rules. END_OF_DOCUMENT_TOKEN_TO_BE_REPLACED

by Taylor Anderson and Spencer Irwin 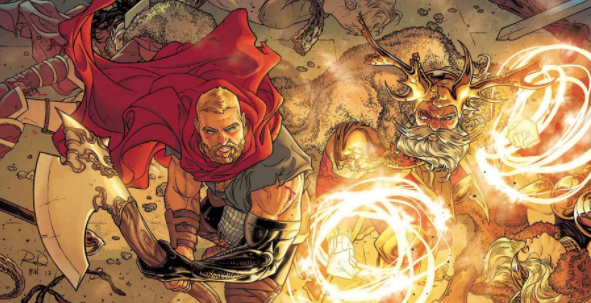 Taylor: One of the hardest lessons to learn growing up is that everything has a cost. This is a particularly difficult lesson to learn because when we’re young, things tend to not really cost all that much, if anything at all. It’s only once we become adults and begin to age that literally everything has some cost associated with it. Want to go out and drink all night? The cost is a hangover. Want to get a master’s degree? The cost is crippling student debt. Heck, even want to find love? The cost is putting in the time and effort to cultivate a meaningful relationship with someone. This isn’t to say that things aren’t worth their cost – love is a good example of something that more than pays for itself. However, the cost of things always has to be collected, as Jane and her friends learn in Mighty Thor 703.

END_OF_DOCUMENT_TOKEN_TO_BE_REPLACED

In the recent arc of Mighty Thor, tension has been building regarding Jane Foster’s inability to chose between being Thor or herself. At the crux of the matter is the fact that Jane has cancer which needs to be treated — which can only be done in her human form. However, she’s needed in virtually every corner of the universe as Thor to try and stop Malekith and his armies of evil. Forced to choose between saving thousands (millions?) and saving herself, Jane makes the obvious heroic choice. But as issue 702 shows, sometimes the obvious heroic choice isn’t always the best one. END_OF_DOCUMENT_TOKEN_TO_BE_REPLACED