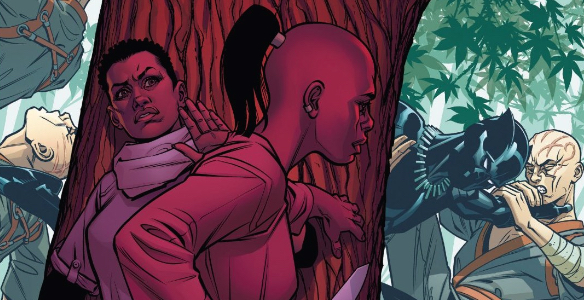 Ta-Nehisi Coates’ run on Black Panther has always vacillated between concerns for greater Wakanda (civil unrest, history, religion) and more straightforward superheroics. It perfectly captures the multiple directions T’Challa is always pulled in, blowing up the typical Marvel interpersonal dramas into matters of state. In recent arcs, those two worlds seem even further apart, as issues almost seemed to alternate between these two concerns. The results have been fantastic — the previous two issues represent opposite ends of that spectrum, and are among the strongest Coates has written — but threatened to split this book into two series running in parallel. That is, until issue 18 reveals that everything might be connected, after all.

I have to hedge on “might,” because, while the monsters T’Challa and Shuri battle in this issue are definitely a construct of their enemies (who include Klaw and Ras the Exhorter), it seems likely that the other monsters have been very real. Then again, when dealing with enemies like Zenzi and Faustus, relying on how things “seem” may not yield the most accurate results. At the very least, seeing Ras the Exhorter hinging with Black Panther’s growing team of enemies (The Sinister-er Seven?) suggests that their tactics may now include spreading appealing disinformation to the Wakandan masses. That’s a timely villainous MO, disseminating “fake news” to foment unrest in a country, and something that would be particularly effective if these bad guys were simply fanning the flames of instability to cash in somehow.

This issue enjoys an embarassment of riches on the art front — both Chris Sprouse and Wilfredo Torres are credited with pencils — but I’m most impressed with the colors by Laura Martin, whose rendering technique seems to change throughout the issue to best suit the moment. There’s an intriguing mix of gradients and more kind of acrylic-looking hard edges, but all of it looks fantastic. Check out how she handles the two-headed monster-constructs:

The Wakandan figures in the background are not only more muted in color; they’re much more simply rendered, keeping our focus on the freaky monster things in the foreground. It’s subtle stuff, but it makes these dialogue-free panels remarkably legible.