Like pus from an open sore, a dangerous energy seeps into the universe in Kieron Gillen and Salvador Larroca’s Star Wars 41, escaping from the remains of the Jedi temple on Jedha. Luke has come to Jedha and the Cult of the Central Isopter looking for guidance in mastering the Force. Larroca and colorist GURU-eFX paint an evocative portrait of a planet in torment — Luke’s in Hell, basically, but that’s the point.

There’s precious little detail about the Cult of the Central Isopter in Star Wars 41 — writer Kieron Gillen is living by the old showman’s adage, “leave ‘em wanting more.” But what we do learn is that the Cult is obsessed with death. They’ve brought Luke and Chulco Gi to the destroyed temple, to this weeping wound in the Force, to have them feel the abyss and — in typical Star Wars fashion — choose their path.

The group’s march ends with the most interesting moment of the issue when Luke, feeling not just the power of the darkness but the confusion that power causes, doubts whether he wants to be a Jedi at all. 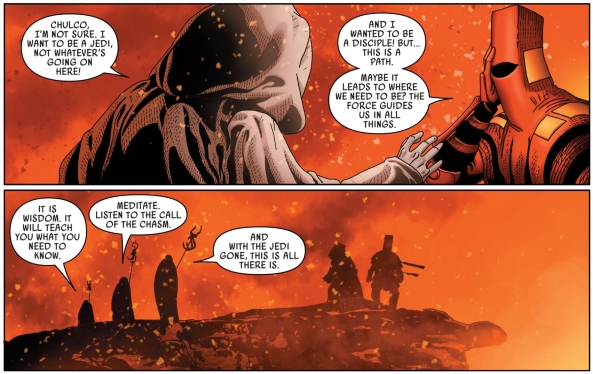 The doubt Luke expresses here is unique in his journey. Unlike the worries he’ll have on Degobah during his training with Yoda, Luke’s doubt isn’t whether or not he’s physically capable of manipulating and wielding the Force. Rather, he’s wondering whether he can handle the emotional toll that understanding the Force, the Light and the Dark side, can exact. It’s an interesting concept that’s only just touched on here, but one that has a lot of potential for opening up new directions in the Star Wars universe if explored in the future.