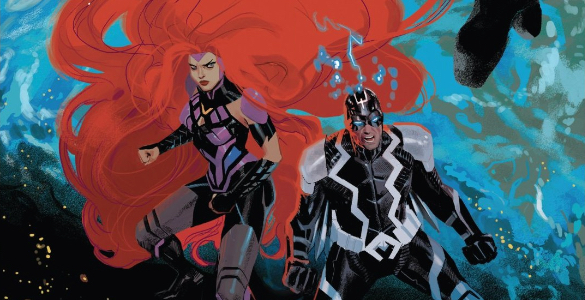 Reading any on-going comic is an exercise in accessing memory. If a writer, or an editor, is feeling particularly generous, there might be a note on the page to jog that memory a bit. Can’t remember what’s up with Karnak? Don’t worry, an editorial note has that addressed. Can’t remember what Swain’s power is? A narration box has your back with a one-word explanation: “Empath.” But these characters are too complex for that, right? Al Ewing’s Inhumans: Judgment Day 1 explores the limits of definition as it applies to a cast of characters that is both constantly changing, and constantly changing back.

Ewing plays with this concept from the minute his characters are introduced. The first Inhuman we see is Flint — a character in the process of changing.

“Geokinetic” explains what Flint can do, but is it definitive? Swaim and Panacea don’t seem to think so, as this new crystal arm adds wrinkles that defy that definition. He’s a living creature, and much like Medusa and Black Bolt’s relationship is harder to nail down with a single word or pithy phrase.

Of course, defining the Inhumans as “indefinable” would be a bit of a cop-out, to say nothing of hypocritical. That’s why Ewing leverages the unending smart-assery of Maximus. Maximus is already a living example of these characters’ mutable natures, having just shifted from “the Mad” to “the Mage.” But he’s also the jackass who tries to leverage everyone’s need for definition to his advantage, making up the word “floob” so he can get Reader to spirit one of them to the astral plane to fight the Progenitors. The amazing thing is that it actually works, sending Medusa into a Mike del Mundo-fueled astral odyssey where she experiences “ten thousand years” of wandering in the desert with Black Bolt. That messianic journey helps Medusa shake the confining definition of “wife of Black Bolt,” while also allowing her buck the label of “dying.”

That’s the crazies part, of course: we have to know that Medusa’s hair would return eventually. In rejecting one definition, she’s really re-embracing another. Mind you, it’s an advantageous definition, so y’know, good for her.

One comment on “The Futility of Definition in Inhumans: Judgment Day 1”