Over the years, Spider-Man has come to mean a lot of different things to a lot of different people. That being the case, it’s still interesting to ponder what about Spidey resonates with so many fans. After all, there are plenty of superheroes who have had comics, but few who are as popular as the web-slinger. I can’t help but feel that there must be something about Spider-Man that all people enjoy — something that makes him almost universal in his appeal. Figuring that out is perhaps a taller order than I can accomplish in this article, but in issue 300 of the Spectacular Spider-Man, there are hints which suggest why he is such a likable hero.

Spider-Man and his compatriots are struggling to stop the Tinkerer, who has disabled every superhero gadget. This means Ironheart is virtually useless, Hawkeye can’t use his special arrows, and Black Panther doesn’t have his abilities augmented by his suit. During this fight, Spider-Man skips out on his comrades to go rescue J. Jonah Jameson and Betty Brant from certain doom. It is here where artist Adam Kubert delivers a panel which suggests what makes Spider-Man so special. 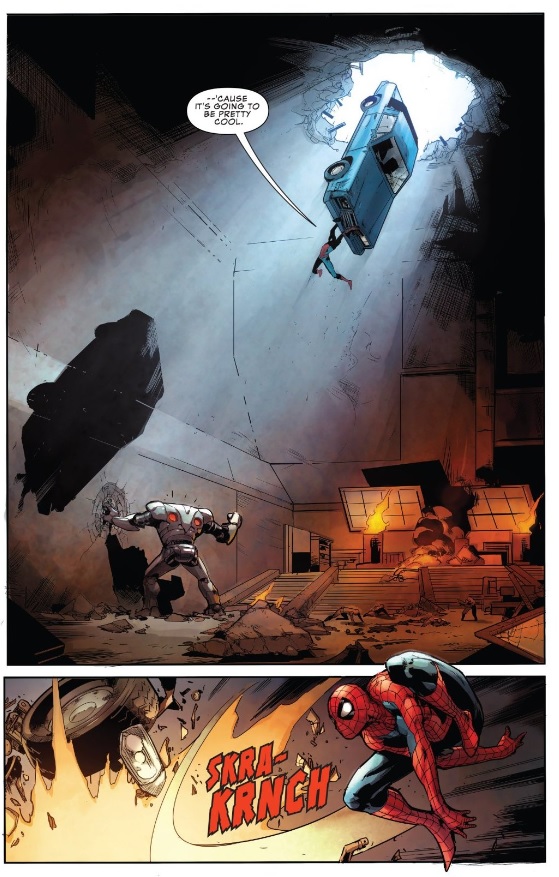 Like an avenging angel, Spider-Man falls from the heavens to deliver a devestating blow to the Tinkerer just as he’s about to smash Mintz. The interplay of shadow and lighting in this panel make for a memorably dynamic and dramatic spread. It shows so well how Spider-Man is this force willing to bring reckoning upon those who would do evil. In this case, he’s doing so to save Mintz, who isn’t exactly innocent. That he’s saving such a man shows just how pure Spider-Man’s intentions are and it’s these things combined which make Spidey so popular. On the one hand, he’s done things we can’t do, like throwing a car. On the other, he’s willing to do things we won’t do, like saving a person questionable morals without hesitation.

In short, we love Spider-Man because he does things we can’t and won’t do. It’s this — and his sense of humor — which bring people back to his stories again and again. Kudos to Kubert to capturing this in one, excellent panel.

One comment on “Spidey in a Nutshell in Peter Parker: The Spectacular Spider-Man 300”