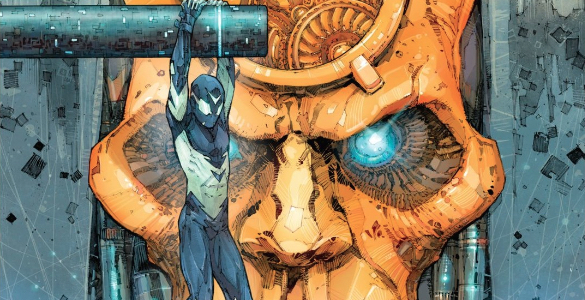 Last month, I praised Sideways 1’s hyper-specificity. Writers Dan DiDio and Justin Jordan crafted an excruciatingly detailed world for the would-be superhero Derek and his geek-culture-obsessed best friend Ernie. Artist Kenneth Rocafort dutifully filled the pages with visual details, whether painstakingly realizing the Gotham City skyline or Ernie’s shrine to cosplay and video games. The high I was feeling from that issue has all but evaporated during the second issue as the details began to feel awkward, forced, or generic.

I don’t really relish the opportunity to talk about why I didn’t like a comic book, especially when a number of the complaints are going to be “this was dumb and unspecific,” but here goes. The first detail that got me questioning their role in this issue is Derek’s narration referring to Tempus Fuginaut as “some nightmare from a Kirby comic.”

D…does Jack Kirby exist within the DC Universe? Even if he does, how does a 16 year old kid in 2018 know Kirby well enough to identify a character that looks like it could have been created by him? Like, that’s some abstract analysis from a kid who was born 8 years after Kirby died. It sounds like the observation of a middle aged comics pro. Jordan, DiDio and Rocafort aren’t showing me Derek here — they’re showing me Jordan, DiDio and Rocafort.

It doesn’t help that Derek has this thought while clinging to the side of the “Gotham State Building” which has got to be the laziest naming job I’ve ever read in a comic. The name doesn’t even track logically: the Empire State Building isn’t called the New York State Building (and if it was, it’d be some bureaucratic office complex in Albany). You want to name a skyscraper in Gotham? Name it for one of the affluent families or powerful companies in the city. Wayne, Kane, Powers, Cobblepot, Elliot — YOU’VE GOT TONS OF OPTIONS.

Sorry, I’m getting worked up here, and I’m not even off the second page. Here’s another early detail that irked me. Ernie calls an Uber to take Derek to the hospital. I’m going to gloss over the fact that the reader really doesn’t need an answer to the question “how did they get from Ernie’s house to the hospital?” The name that Jordan and DiDio came up with for the fake ride sharing app is “Carber.” It’s an absurd name that only works if you already have “Uber” in your head — otherwise where does that “-ber” come from? 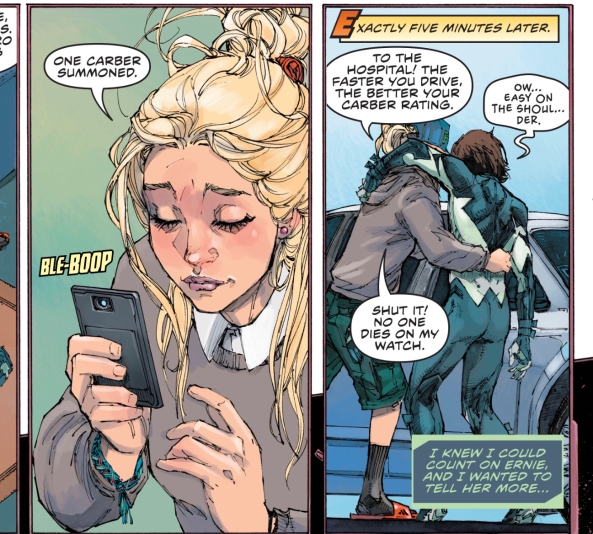 But, okay, now that we’ve gone through the trouble of naming the ride share program (enduring a clumsy portmanteau in the process) and explaining that that’s how the kids are riding to the hospital, there must be some kind of point, right? Here’s a fun fact about Uber and Lyft, it is against company policy to use the cars as emergency medical vehicles, for obvious liability-related reasons. Ernie says to a crumpled Derek “no one dies on my watch!” and the Carber driver… just shuts up and takes it? I really don’t know what the point of including this detail is if the team is just going to get it wrong.

Then the story switches over to Derek’s mother’s perspective, and the creative team continues to trade in tropes and clumsy details. She recounts her experience in Gotham and actually says “every first responder was out on the street” as though that’s what she was looking for. “First responder” is a term invented for headlines and magnetic ribbons. She should have been looking for a police officer, a fire fighter, anyone who looked like they knew what they were doing.

It’s just a lot of lazy, nonspecific writing. Glad you nailed that Kirby ref tho.

6 comments on “Dumbass Details in Sideways 2”