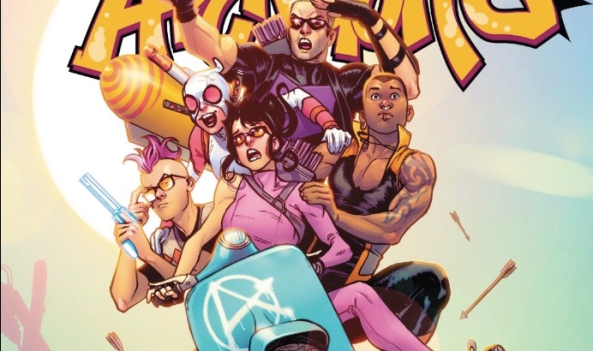 Spencer: Despite that famous tagline, reality television rightfully has a reputation for being anything but real, with contestants purposely taking on certain roles for the camera and producers editing footage in misleading ways to construct particular narratives (whether they’re “true” or not). Part of what makes West Coast Avengers so interesting, then, is that, despite its “superhero reality show” concept, creators Kelly Thompson and Stefano Caselli seem devoted to depicting the sad realities of their cast’s lives, to finding the truth behind their day to day existences, even when those existences are patently absurd.

And “patently absurd” may be the only way to describe the threats that book-end West Coast Avengers 1: first the “land sharks,” and later the massive, mindless Tigra and the surreal “B.R.O.D.O.K.” Thompson and Caselli still treat them all like legitimate challenges, though — not just in the threat they pose to Los Angeles, but in the complications they create for the WCA, and for Kate Bishop in particular. First of all, they create a “need” — a need for a superhero team to protect Marvel’s defenseless, imperiled left coast. Kate rises to meet that need because she’s a hero who will not stand-by while others are in need, of course, but Thompson and Caselli also treat Kate like a bit of an entrepreneur, who sees an opportunity and knows she has what it takes to meet it.

In fact, Kate as a small business owner has been a consistent part of Thompson’s tenure with the character. Hawkeye found Kate opening a P.I. business in order to fund her investigation into her parents, but West Coast Avengers makes the frustrating realities of running a business an even more pressing part of Kate’s life. Kate’s quest to get the West Coast Avengers off the ground finds her facing the same challenges anyone would when opening a new business: finding capital, and finding good employees. Both are difficult, but I’ve been a hiring manager before and let me tell you, the second might be even harder than the first.

Kate’s search for superheroes to join her team involves straight-up job interviews in all their tedious, soul-sucking reality. In the fantastic world of superhero comics superheroes just show up fully formed to join a team, but Kate has to search for qualified members, even if their idea of qualifications (such as Bread Boy’s here) differ wildly from Kate’s. The WCA’s funding faces a similarly realistic set-back: she doesn’t have any. Most superhero teams just so happen to contain a stupendously wealthy member who makes money a non-issue, but Kate’s struggle to fund her team is just as large a part of West Coast Avengers as the villains they fight. It’s all a part of Thompson and Caselli’s dedication to depicting every aspect of these character’s reality honestly and with equal importance.

Thus, Quentin Quite’s arrival with a camera crew (and the crew’s arrival with the funding Kate needs) threatens to undermine all of that, because there’s nothing more dangerous to reality than reality television, right? Thankfully, Thompson and Caselli avoid any potential pitfalls there by continuing to focus on the truth behind their characters; in this situation, it helps that what readers see isn’t the finished product, the reality show viewers might be seeing at home, but the untouched footage and un-recorded moments behind it all.

This comes most into play with the “confessionals,” the moments when the cast talk directly to the camera. Often an opportunity for reality shows to distort their cast’s feelings and lead them to pre-planned, desired conclusions, Thompson and Caselli don’t let that happen here. Instead, they keep things real. The DIY set and lack of an official confessional room mean that characters sometimes wander into the confessionals unaware, giving readers an honest glimpse of what they’re up to at the moment. More importantly, the creative team give readers a brief glimpse of the camera crew when Quentin arrives, allow us to see the crew speak to the Avengers, and show us their reactions before they’re edited down to fit the producer’s agendas, all creating a more authentic experience. 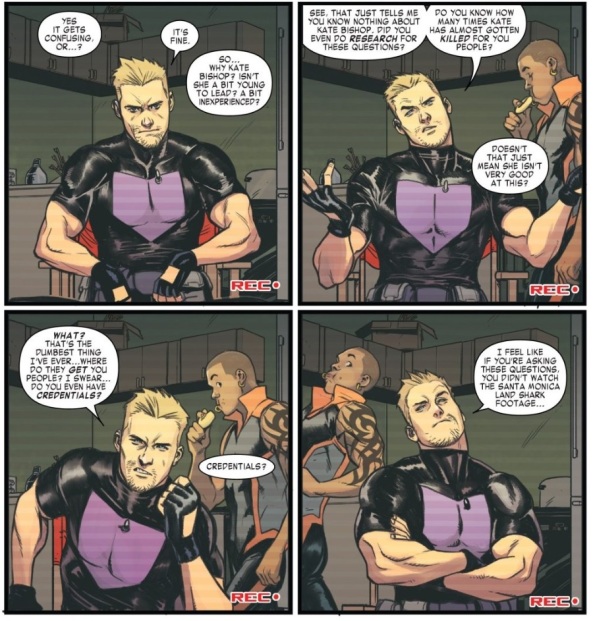 In fact, other than Quentin’s on-camera tantrum late in the issue, the West Coast Avengers actively resist the crew’s leading questions and attempts to paint Kate as incompetent. Instead, they praise her complicated truths; yes, she is a bit of a human disaster, but she’s also uniquely suited to lead this team, and, in fact, the qualities that make her such a disaster may also be the same ones that make her such a perfect leader. In West Coast Avengers, the messy reality of it all is always more interesting than any slick, contrived conflict could ever be.

That’s what ultimately makes their villains so interesting; they’re absurd and a bit contrived (I imagine purposefully so) in comparison, especially B.R.O.D.O.K., who seems almost designed by a room of reality television writers. I can just imagine him hanging out with Carson Daly on a MTV Spring Break beach somewhere, and his arrival specifically stirs up drama for half the team (Kate, Johnny, Gwenpool). And a founding West Coast Avenger showing up, giant-sized and driven mad, as soon as a new incarnation of the team forms can’t be a coincidence. I wouldn’t be surprised at all if these threats are all the reality show’s doing, a way to create some conflict for their new team to face.

Does that sound feasible to you, Patrick? Or, if that’s too much speculation, there’s plenty of more down-to-Earth details we haven’t had a chance to discuss yet that I’d love to hear your opinion on as well.

Patrick: We can play a little Speculation Game before getting into deets! There definitely is something fishy about the reality show crew, and I think it’s smart to tie them to the villains the WCA face at the end of the issue. But I think you got it all backwards. The villains aren’t an invention of the film crew, the film crew are the villains. You already mentioned that the confessionals feel off, and that’s partially because we’re seeing the unedited content of them, and partially because the crew isn’t doing a pro-level job of it. People are walking into the shot, they’re not filmed against green screen, and perhaps most damning of all in 2018, they’re not even filming in HD.

Look at those scan lines! Also, who’s lighting this thing? The colors are all washed out compared to the vibrant color of the real world segments. When we eventually meet the crew, it’s just two guys – one with a boom mic and the other with a handheld camera. Not a steady cam, mind you, just a shoulder-mounted camcorder. I bet Ms. America doesn’t even have a lavalier clipped to her cool jacket-hoody-thing. And when they’re asked what form their movie is going to take, they have literally no idea. “They just want us to keep filming.” These dudes are either rinky-dink as fuck or they’re posing as a film crew to put our heroes in harm’s way.

But you know who’s not rinky-dink as fuck? The artistic team of Stefano Caselli and Triona Farrell. Let me share with you my favorite page from the issue. 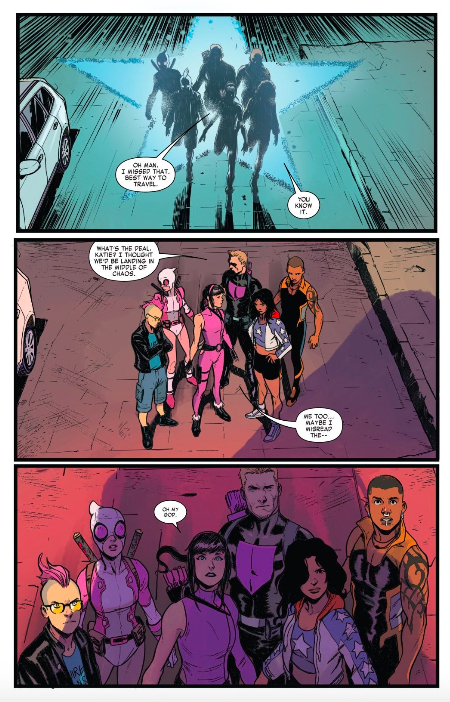 This is an incredibly cinematic page, employing a camera that steadily tracks in on our subjects as they witness something the audience isn’t privy to yet. In the first panel, the perspective is self-justifying: we gotta see that sweet special effect of America’s interdimensional teleportation. The second panel is where it starts to feel like the camera is withholding something from us – notice how Caselli keeps a sliver of that white car in the shot to insist on the continuity of these moments. We also see the beginning of a shadow creeping in from the right side of the panel. Right-to-left motion on the page is typically the path forged by villains and antagonists, so the reader instinctively knows that whatever’s casting this shadow is bad news. And in the last panel, the shadow has swallowed our heroes whole, recreating the monster-discover moment from literally any movie featuring a giant monster. Thompson has this tagged with the perfect piece of meaningless movie-dialogue: Kate’s “Oh my God.” If the reality film crew doesn’t know what they’re doing, then Caselli and Farrell are goddamn blockbuster pros.

I breezed right past it, but I love the simple technique of using that sort of electric blue color to make America’s stars feel otherworldly. The world of Kate Bishop’s Los Angeles is so infused with cool, heavy colors – purples, greens, even the So Cal sun takes on that thick dark orange quality the region is known for. The teleportation star is like a blue bordering on white, and against the rest of the colors in Farrell’s palette, it reads like a source of extraterrestrial light. 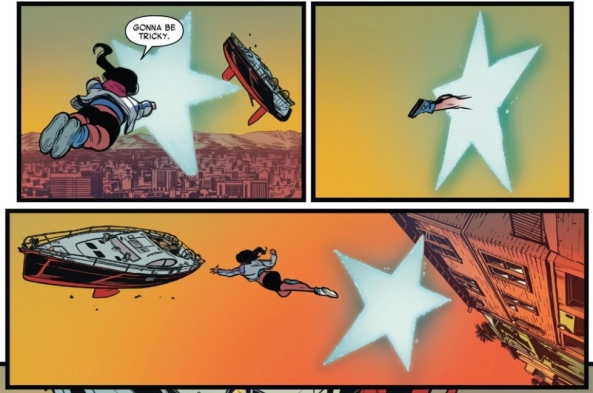 I mean, come on – that’s so cool looking. I know we’re dealing with themes of reality vs. fabricated reality, but honestly, if this series is just an excuse to get Caselli and Farrell to render some jaw dropping action set pieces, I’d be totally okay with that. It’s not often that we see a comic book effectively speaking the language of blockbuster film, but West Coast Avengers fluent in it.