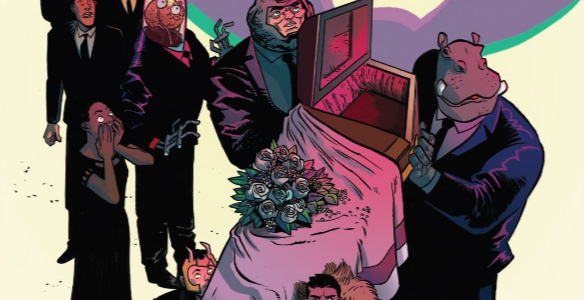 Doreen Green’s honesty is a key part of her character. It allows her to find nonviolent solutions to so many of her conflicts, helping her adversaries find a better path forward. But it also means she’s not great at subterfuge. It’s a weakness that Ryan North and Derek Charm lean into hilariously, as Doreen and Nancy don some truly absurd costumes in order to infiltrate Squirrel Girl’s own funeral.

As silly as these costumes are, they also reinforce Doreen’s natural honesty — she’s simply incapable of selling a lie convincingly. It’s a philosophy that North and Charm use to inform the whole aesthetic of the series, which tends to overshare and lampshade niggling details we might have otherwise overlooked. But unlike Doreen’s compulsive honesty, North and Charm can use our trust against us, landing a thrilling twist in this issue’s final page.

Right from the start, this issue is wringing jokes out of its honesty. Check out how North addresses the very premise of superheroes: 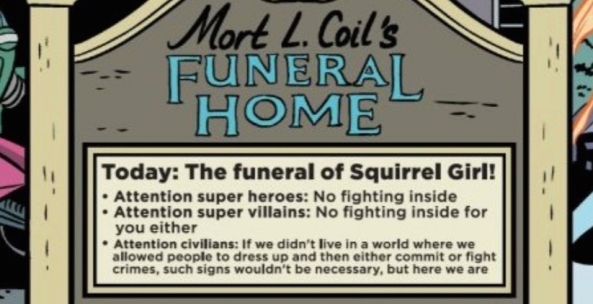 That’s a well they return to throughout the funeral sequence, especially as the focus lingers on some of the sillier animal-based wings of the Marvel Universe, from the Walrus (which North points out has the proportional speed, strength, and agility of a walrus, though because he’s smaller than a regular walrus, is actually less speedy, strong, and agile) to the Hippo (whose binge eating North chalks up to frugality). Of course, we also spend a good bit of time with some more well-known Marvel heroes, like Iron Man, Captain America, and Black Widow, but even they’re lampshading some of the conceits of superherodom, including the practicality of black variant uniforms.

And hey, while we’re here, we might as well acknowledge another example of North lampshading the absurdity of comics tropes, reminding us that she probably wouldn’t have been killed off-panel between issues. It’s the kind of obvious conclusion a savvy comics reader would come to on their own, but this series can’t help but call itself out. Combined with those other jokes, you get the clear sense that this issue is totally on-the-level with us — more honest than basically any other comic would dare to be.

But then we get that final twist, and we have to reconcile that goofily wide-ranging cast with the fact that some of them are probably skrulls. That is, while we thought some of those funeral scenes were just there to remind us that there are some silly characters in the Marvel Universe (and that even the “serious” ones participate in plenty of silliness), we were actually being introduced to a cast of suspects. Any one of those characters could be a skrull, and we might need to check in with all of them before we can know for sure. It’s a twist that works precisely because the rest of the issue is designed to lull us into trusting what we see. It’s a hell of a way for North and Charm to remind us that they can deceive us, giving us just a taste of the gut-punch that we might feel if we were bing infiltrated by imposters ourselves.