Last week I had the pleasure of attending Friday’s Image Comics spotlight panel at New York Comic Con. The panel was a chance for about seven or eight creators to talk about their new or upcoming series, and while every creator there had an excellent pitch (and I want to read all their books), it was Daniel Warren Johnson who seemed to win the crowd fastest, with just two words: “Murder Falcon.” Murder Falcon has the kind of wonderfully insane concept — metalhead’s guitar playing allows him to fight monsters via an absolutely ripped bird named Murder Falcon — that just screams for attention, but for a book to keep readers, it needs more than just an audacious premise. Thankfully, Johnson is well aware of this, and thus Murder Falcon 1 finds the heart beneath all the (wonderful) silliness, and highlights the real emotional power of its premise.

Jake was a talented and successful guitarist until he fell into despair after the death of his wife. After a monster attacks him in his apartment, though, he’s rescued by a being known as Murder Falcon, who reveals their symbiotic relationship — the better Jake plays guitar, the better Murder Falcon is at fighting monsters. The metaphor here is pretty clear; just like Jake’s music literally gives Murder Falcon power, in real life music has the same ability to help strengthen its listeners. Johnson highlights this ability in multiple ways, both big and small, throughout the issue. Besides Murder Falcon himself, there’s also the waitress, Peggy, who tells Jake how his music “really brightens [her] day.” Then there’s also this wonderful scene, perhaps my favorite in the issue.

It’s just Jake and Murder Falcon, bonding and getting pumped up over their shared love of a song. I’ve been in this same exact situation with friends more times than I can count, and the bonds music has helped me build have been incalculable and invaluable in my life. That’s the kind of power Jake — or any musician or artist — wields.

That power doesn’t just help the listener, though. Johnson also highlights how making music can strengthen the musician as well. 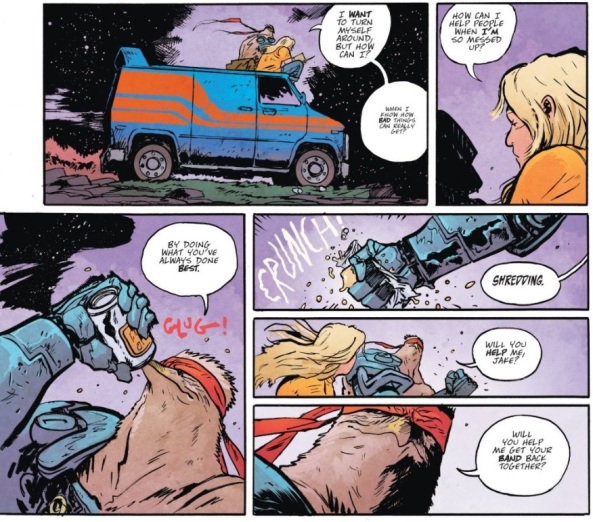 Murder Falcon tells Jake that the best way to turn himself around, to help himself and others, is to keep shredding, to keep making music. The way his music helps others can help him as well, of course, but Falcon is also pointing out that just the act of playing and creating music can be enough to help him move forward. In his afterwards, Johnson himself talks about playing music has always helped through his hardest times. As someone who’s grown up around the pop-punk and emo scenes, I’ve seen artists share their darkest secrets and innermost torment through their music in an attempt to exorcise their own personal demons, while in a genre like Murder Falcon‘s beloved metal, sometimes just shredding away on the guitar is enough to work out the frustration. No matter what, it’s the power of music, and it’s unparalleled.

Johnson’s art (and Mike Spicer’s colors) are perfectly suited to Murder Falcon‘s more action-packed side. Johnson is a top-level monster designer, and his ability to pack tons of small panels into a page without ever losing clarity allows him to emphasize every beat of the action, creating taut, propulsive battles. That said, Johnson and Spicer certainly know how to make those more emotional beats sing as well. Jake’s flashbacks to his wife generally pop up in small panels shaded in somber blues, squeezing themselves into the middle of fight scenes or conversations just like real life traumatic memories always pop up at the worst possible moments.

That said, sometimes those emotions just need space to breathe, and Johnson and Spicer certainly understand when and how to give those emotions the space they need. 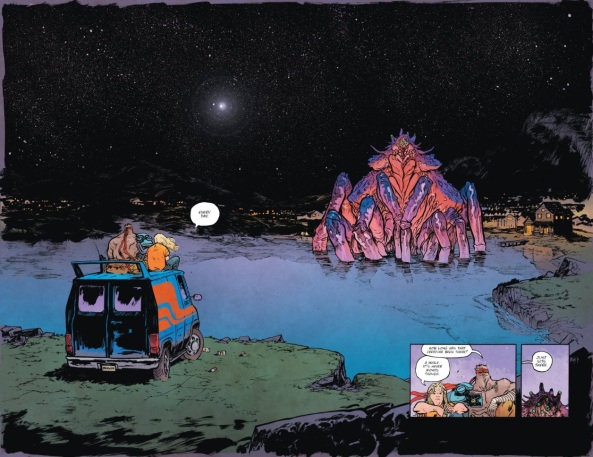 After an eight-panel page cutting between Jake and Falcon’s conversation and flashbacks to Jake’s marriage, Falcon asks Jake, “Do you still miss her?” “Every day” is Jake’s answer, and Johnson knows that the unending enormity of Jake’s loss can’t be contained in the panel-packed layout of the previous page. He needs a double-page spread, the only one in the issue, to properly convey the amount of space Jake’s loss is taking up in his life. It’s smart choices like this that make Murder Falcon more than just an eye-catching premise; they make it a quality book worth coming back to.