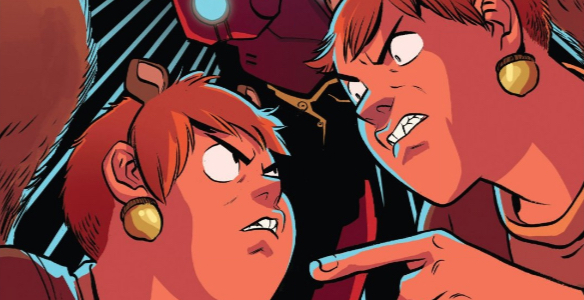 You guys, I love The Thing. That’s the John Carpenter movie, not Ben Grimm (though he’s cool, too). I’m a sucker for parlor mysteries in general, but the thought that “the killer” might actually be an imposter adds room for extra little twists that make the mysteries more mysterious and the tension more tense. Ryan North and Derek Charm play with this concept in the opening scene of Unbeatable Squirrel Girl 38, as Doreen and her computationally-minded friends devise a perfectly logical means of verifying everyone’s true identity. In Squirrel Girl’s world, there’s no white-knuckle blood-test scene, just the shortest route to diffusing that tension. It’s a choice North and Charm make throughout the issue, and while it sounds like it would rob the scenes of drama, it actually helps keep the pace moving along at a dizzying clip.

The first twist comes as Tony fails to pass the simple codeword failsafe Nancy had set up. It’s easy to imagine that big reveal on a page turn, with North and Charm hoping to maximize the tension of our wondering if Tony will or won’t say the codeword. Instead, the moment falls in the middle of the page:

This shifts the emphasis from the question of Tony’s identity to the team’s reaction to it. North and Charm aren’t milking these plot points for tension because the knock-on effects are actually more important to the story they’re telling.

They pull a similar trick a few pages later as Tony seemingly reverses that conclusion, finally saying the codeword that would suggest he actually was Tony all along. Here again, the moment isn’t stretched across a page turn, instead setting up a much bigger reaction:

There’s no need to luxuriate in the tension of the reveal because the actual drama here is in how Doreen and Nancy react to this information. We get a much longer, slower diffusion of tension in this way, coming almost all the way back down to neutral before they hit us with one more mid-page reveal/reversal:

Here, the placement on the page actually works to amp up the surprise — we weren’t expecting there to be any tension in this scene, so the fact that we’re hit with it in the middle of the page catches us off-guard. It codifies and amplifies those previous twists, bringing them both into perspective with a single unexpected line. It’s a moment of genuine tension wrung from having toyed with our emotions so casually earlier in the issue. Just so much more fun than if we had always known for sure he was or wasn’t a skrull.

And then, to cap it all off, North and Charm do hit us with a more classic page turn surprise as “Tony” turns the tables on Doreen and Nancy. A cliffhanger is all but mandatory at the end of an issue (which necessarily can’t show you the reactions to that moment), but this issue gets a lot of mileage out of undermining and withholding similar moments throughout the issue. It’s an unexpected way to build momentum, but one that works brilliantly here.