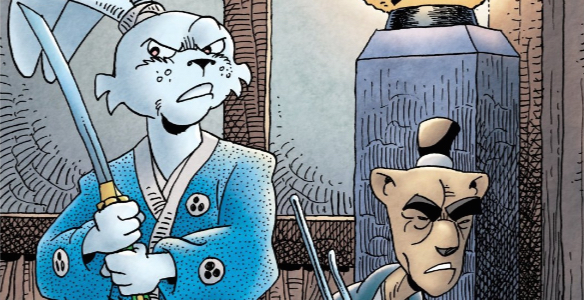 Usagi Yojimbo: The Hidden 5 is a great reminder of how the comics medium can be/should be very intentional with its imagery. In film the term “match cut” refers to a transition where two shots are paralleled (matched) by their action or subject matter. Stan Sakai uses this technique in the middle of Usagi Yojimbo: The Hidden 5 to reiterate the kind of villains that Usagi is dealing with. END_OF_DOCUMENT_TOKEN_TO_BE_REPLACED

In a world of glorified anti-heroes we often forget the merits of the old fashioned, tradtional hero. Usagi Yojimbo: The Hidden 2 leans on the classic archetype of the law-abiding do-gooder in Inspector Ishida, who is in charge of the murder case that Usagi Yojimbo is working on. END_OF_DOCUMENT_TOKEN_TO_BE_REPLACED

Patrick: I saw the new Wes Anderson movie, Isle of Dogs, this weekend. It’s cute, moody and starkly graphic — it fulfills the promise made by the phrase “Directed by Wes Anderson.” But the film also has a weird relationship with its setting: the Japanese language and and culture represent the alien in its own country. The dogs that we follow around, who are the heroes of this story, are all voiced, speaking English, by white American actors. A note tells us early on that barks and translated into English, but Japanese will remain untranslated (unless when done diegetically). For whatever argument you can make for Anderson’s reverence of the language and the culture (to say nothing of employing a bunch of Japanese actors and film folk), there’s no denying that the Japanese-ness of Isle of Dogs is meant to be novel and out of the ordinary. Usagi Yojimbo: The Hidden 1 takes the exact opposite route, making damn sure that the East is familiar and the West is exotic. END_OF_DOCUMENT_TOKEN_TO_BE_REPLACED