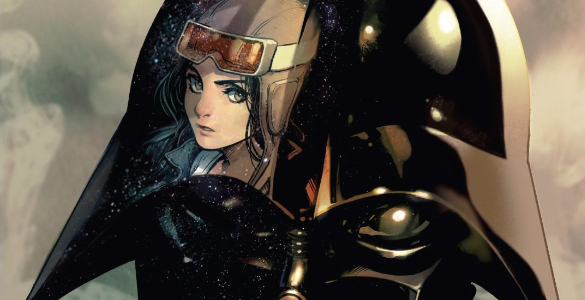 Fear is a powerful motivator, especially in the Star Wars universe. After all, Anakin Skywalker’s (misguided) fear of losing his wife transformed him into Darth Vader. In Doctor Aphra 12, the “good” doctor makes a lot of desperate moves in order to avoid one of her great fears: Darth Vader himself. END_OF_DOCUMENT_TOKEN_TO_BE_REPLACED 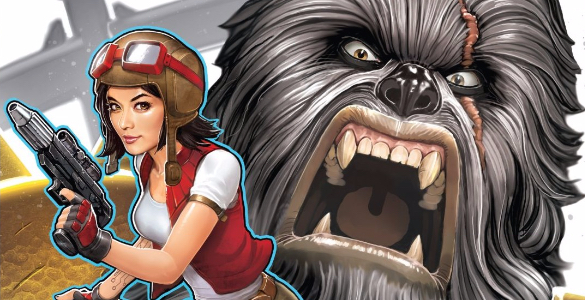 Doctor Aphra is a book built around taking familiar characters from the Star Wars universe and remixing them by removing their moral compasses. Chelli Aphra is the Han Solo who would have taken his reward at the end of A New Hope and never looked back as the Rebels attacked the Death Star. Her robot compatriots, BeeTee and Triple-Zero, are the lovable C-3PO and R2D2, but also they’re always looking for opportunities to murder. And Black Krrsantan? He’s always been a bit of a mystery, but Doctor Aphra Annual 1 revels in finally letting the audience in on his past. END_OF_DOCUMENT_TOKEN_TO_BE_REPLACED

Taylor: The movie Crimson Peak, directed by the well-known and visually gifted Guillermo del Toro, received lukewarm reviews when it first came out. Its lackluster reception is understandable because the movie never truly reaches the heights of horror everyone was expecting it too. That, paired with a story that never truly paid off, doomed it to mediocrity. However, the movie does look impressive, and it nails the pace of a true Gothic horror story quite well, making it all the more disappointing that it didn’t pan out in the end — del Toro had the hard part complete already. Setting a pace for a Gothic story is difficult because it requires a delicate control to the narrative forward, almost at an achingly slow pace to build tension. If only del Toro had paired with Jason Aaron on writing Star Wars 31, we might have the perfect Gothic inspired issue.

END_OF_DOCUMENT_TOKEN_TO_BE_REPLACED

Michael: Star Wars: The Screaming Citadel 1 kicks off Marvel’s latest Star Wars crossover starring Luke Skywalker and Doctor Aphra. The extra-long one-shot issue has an ominous ending that definitely earns its horror genre-inspired title. In short, Kieron Gillen and Marco Checchetto seem to be prepping us for what could arguably be called “The Star Wars Vampire Diaries.” Maybe not — I’ve never watched that show — but it has vampires in it, right?

END_OF_DOCUMENT_TOKEN_TO_BE_REPLACED

Patrick: Most every Star Wars comic book, movie, video game or TV show is going to have to wrestle with history. The franchise has been culturally relevant for so long that every new experience in this universe is going to draw comparison to the various media that came before. On top of that, history is an inherent part of the narrative: characters grow up the echoes of a great civil war and among the ruins of galaxy-spanning republic. So characters, creators and audiences must show a certain reverence for that history. All characters, that is, except for Doctor Aphra, who’s familiarity with that history breeds boredom. Rather than reveling in what has come before, Kieron Gillen and Kev Walker’s Doctor Aphra 6 looks aggressively, persistently, forward. END_OF_DOCUMENT_TOKEN_TO_BE_REPLACED

Taylor: When I was young I didn’t want to be a firefighter or sports-star the way a lot of other boys did. Instead, I dreamt of becoming either a paleontologist or archaeologist. While I have to admit Jurassic Park and Indiana Jones played a role in this desire, I was also drawn to the sheer mystery of studying long gone civilizations and animals. There’s something incredibly tantalizing when confronted with ruins or fossils: they speak of a once great culture or animal that has collapsed and left behind only echoes of its stories. Before reading Dr. Aphra, I had never really considered that the Star Wars universe a place full of such mystery, but as issue 5 shows, not only is Star Wars capable of this, but it can excel at it, too.

END_OF_DOCUMENT_TOKEN_TO_BE_REPLACED

Taylor:  Last month the outstanding Darth Vader series penned by Kieron Gillen and Salvador Larroca wrapped up after 25 stellar issues. In its short run Darth Vader skillfully contributed to the myth of its titular character in a way that previous Star Wars titles couldn’t quite pull off. But for all the fantastic work done on the character of Vader, what really stands out about the series is the creation of so many interesting and fully realized ancillary characters. Of these, Vader’s hired accomplice Doctor Aphra stands out as one of the most interesting, and so she is getting a chance to lead her own series. With the always entertaining Triple-Zero and Beetee in tow can this series possibly live up to the story that spawned it?

END_OF_DOCUMENT_TOKEN_TO_BE_REPLACED

Michael: At my old age of 27, I must admit that I have gotten a little curmudgeonly – especially where pop culture is concerned. I’ve seen so many different iterations of ideas and tropes that sometimes it’s hard to tell if something is cliché or if I’ve just put myself in a position to see the same story 10 billion times. Darth Vader 8 took all of my predictions and suppositions and knocked them flat on their ass. And this pleases me. END_OF_DOCUMENT_TOKEN_TO_BE_REPLACED