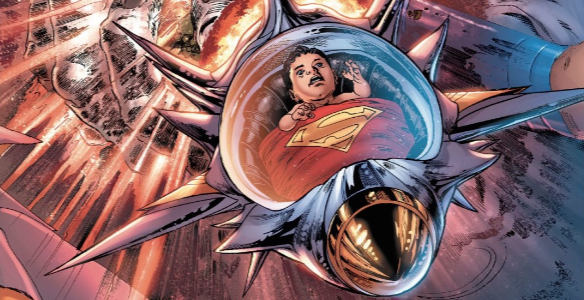 Any seasoned comic book reader — or really anyone who knows their pop culture — should know that you can never be sure that a character is dead unless you find their body. And even when they do find a body there’s the chance that it’s a clone, robot, time traveler, impostor, etc. While we haven’t found any bodies per se, in Man of Steel 3 it seems that Brian Michael Bendis has just killed…The Bottle City of Kandor. END_OF_DOCUMENT_TOKEN_TO_BE_REPLACED

Today, Drew and Patrick are discussing Supergirl 15, originally released December 19th, 2012. This issue is part of the H’el on Earth crossover event. Click here for complete H’el on Earth coverage.

Drew: Ironically, I’m kind of a sucker for stories about con men. I like movies like Matchstick Men and Catch Me if You Can more than they probably deserve, and the scams from LOST and Justice League Dark might be my favorite parts of those series. With so many compelling, relatable con artists running around fiction, it’s easy for me to forget that they’re generally bad guys. It’s somewhat understandable that they aren’t depicted negatively more often; we like to think that we’re smart, and that the protagonists we identify with are also smart, so it’s a risky move to depict a hero being taken in by a scam. Mike Johnson attempts that risky move in Supergirl 15, with decidedly mixed results.