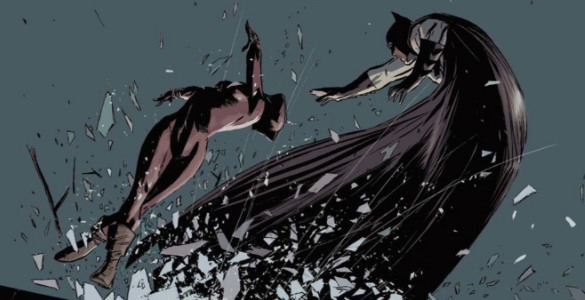 If you haven’t been paying much attention, Tom King is a big shipper of Batman and Catwoman. In Batman Annual 2, King forgoes any direct connection to his current Batman run and instead writes a Batman/Catwoman tale that functions as the first and last word on the couple. END_OF_DOCUMENT_TOKEN_TO_BE_REPLACED 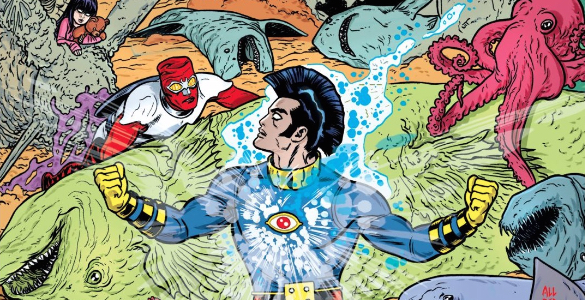 Michael: Comic book superheroes and their exploits are now more mainstream than ever. We take Kryptonian sun gods, spider-proportionally-strong teenagers, and wise-cracking space raccoons at face value — most likely because they’re presented to us as “real” on the big screen. In the face of this mainstream, watered down mass appeal, I find it important to recognize and celebrate the stories that embrace their truly bizarre and outrageous origins. Case in point: Bug! The Adventures of Forager 5. END_OF_DOCUMENT_TOKEN_TO_BE_REPLACED

Greg: I’m just gonna be blunt and cheesy up-top: the human imagination is a goddamn beautiful thing. It’s a place where everything and nothing exists and doesn’t exist. A breeding ground for active creation and idle daydreaming. It’s arguably the most fun thing about being a human, and by combining heady intellectual concepts of quantum physics with a simple yet emotionally grounded narrative drive (combined with a healthy amount of “call the unusual thing out” humor), Silver Surfer 3 is one of the purest encapsulations of imagination I have seen in recent memory.

END_OF_DOCUMENT_TOKEN_TO_BE_REPLACED

Wishes are powerful things, Herald. Especially if you believe in them. They might just become your future.

Scott: Like any kid, I spent many summer nights gazing up at the sky, hoping to see a shooting star that would grant me a wish. I don’t remember what any of those wishes were, but at the time nothing seemed more important. Now, I see making wishes as an exercise in picturing happiness, with each wish a snapshot of our greatest desire, constantly changing as we mature and our senses of reality take shape. Eventually, our sense of wonder fades away to the point that wishes no longer carry much weight. For that reason, it’s dangerous to base a story around the power of wishes — most readers no longer believe in them. While comic books often ask us to suspend our disbelief, this is like asking us to re-believe in a part of us that we’ve lost. Silver Surfer 2 focuses on the power of wishes, and while it isn’t seamless, it does bring with it an irresistible sense of wonder, the same one I had as a kid gazing at the stars.

END_OF_DOCUMENT_TOKEN_TO_BE_REPLACED

Taylor: Surfer’s have always had a pretty bogus rap around popular culture. We tend to think of them as west coast bums who have forgone any responsibility in their endless pursuit of the perfect wave. It’s an unfair stereotype and one that fails to acknowledge the deep community and thoughtful demeanor of a lot of surfers out there. Similarly, the Silver Surfer has struggled with his one reputation. Once the harbinger of doom for Galactus, the Silver Surfer now spends his days trying to make up for a past life of wrongdoing. His reputation is poor but maybe with enough good deeds he can change the way others look at him… and perhaps change the universe as well.