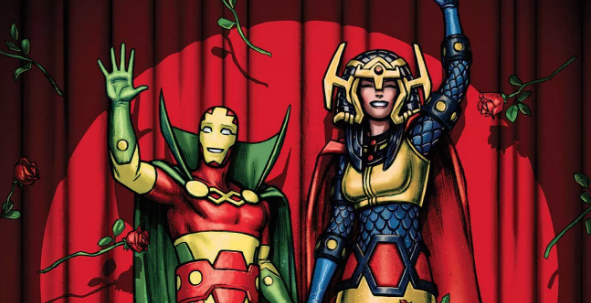 Drew: Critics of postmodern fiction often suggest that its self-reflexiveness is flashy, but devoid of meaning. According to the argument, postmodernism is a bit like racing stripes on a car — it might be superficially appealing, but doesn’t actually change what’s under the hood. I would argue that those critics are forgetting (or perhaps taking for granted) one of the most basic roles fiction plays in our lives, as an analogy for reality, augmented and enhanced to reveal something to us about the world we live in. In that way, postmodern self-reflexivity is simply part of that analogy — particularly apt for addressing our own existential crises. There’s no clearer exemplar of this argument than Mister Miracle 12, which twists all of the miniseries’ questions about Scott Free’s reality into a moving commentary on life with depression. END_OF_DOCUMENT_TOKEN_TO_BE_REPLACED

Michael: Comic book superheroes and their exploits are now more mainstream than ever. We take Kryptonian sun gods, spider-proportionally-strong teenagers, and wise-cracking space raccoons at face value — most likely because they’re presented to us as “real” on the big screen. In the face of this mainstream, watered down mass appeal, I find it important to recognize and celebrate the stories that embrace their truly bizarre and outrageous origins. Case in point: Bug! The Adventures of Forager 5. END_OF_DOCUMENT_TOKEN_TO_BE_REPLACED

Dense mythologies are both the greatest strength and weakness of modern comics. We could spend ages parsing out how the major companies have approached those mythologies in recent years, but all of those broader approaches are largely irrelevant when talking about Bug! The Adventures of Forager, which continues to march to the beat of its own drum. It’s attitude is deeply reverent of Jack Kirby’s contributions to the DC mythos, systematically touching on each forgotten storyline from his time there, while somehow also taking a completely irreverent “don’t sweat the small stuff” approach to the material. Completist Kirby fans will recognize every situation Forager encounters, but newcomers (like me) are left largely in the shoes of Forager, who mostly sees all of this stuff as kooky weirdness. It’s a balance that shouldn’t work nearly as well as it does, somehow knitting all of this kooky weirdness into the dense mythology it always was. END_OF_DOCUMENT_TOKEN_TO_BE_REPLACED 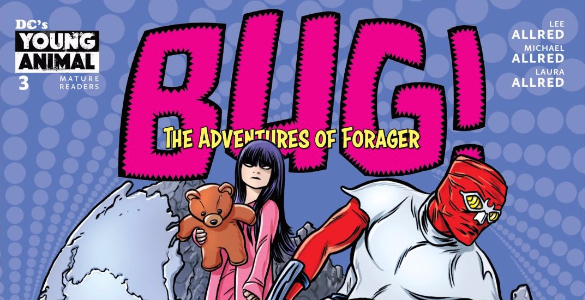 That this series riffs on the entirely of Jack Kirby’s DC work isn’t just a given — it’s a primary draw. And there’s plenty of work to touch upon. While this series is tangentially related to Kirby’s well-known Fourth World mythology, much of the focus has been on Kirby’s lesser-known DC creations. But what fascinates me about this issue isn’t just the presence of deep-cut characters like Atlas (and his vendetta against Hyssa the Lizard King), but that it does so while also making allusions to non-comics works. The effect is a densely literate work, as crystalline as the shards of “possible outcomes” that feature so prominently in this issue. END_OF_DOCUMENT_TOKEN_TO_BE_REPLACED 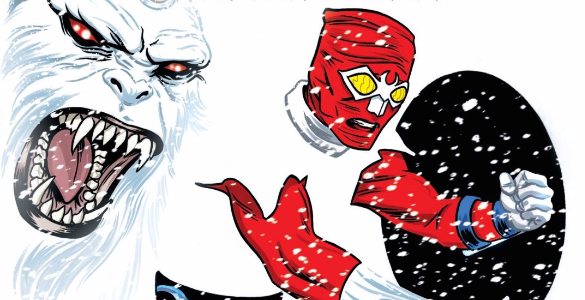 How do we characterize a remix? As a self-aware riff on whatever work is being remixed, it feels somewhat postmodern, but in my mind, remixes don’t necessarily share the skepticism and ironic distance we associate with postmodernism. Indeed, many remixes might be better understood as reverent tributes to their source material, taking what I’d argue is a decidedly romantic approach: offering an unabridged window into how the remixer sees a given work of art (or entire oeuvre). I was first struck by this idea when listening to The Beatles’ Love, which feels very much like bouncing around inside a Beatles fan’s head, but it came back in a big way as I read Bug! The Adventures of Forager 2, an issue that takes the same approach to comics mythology (both DC’s and others). END_OF_DOCUMENT_TOKEN_TO_BE_REPLACED

Today, Patrick and Drew are discussing Bug! The Adventures of Forager 1, originally released May 10, 2017. As always, this article contains SPOILERS.

Patrick: One of the inherent problems with superhero stories is that the characters are often immediately knowable. That guy in the bat costume? He’s Batman, dead parents, war on crime, world’s greatest detective. You know him. You know his secret identity, his home, his son, his butler, his past, his present, his future. That makes Batman familiar, comfortable. In Bug! The Adventures of Forager 1, Lee and Michael Allred make an argument for the power of not knowing, striking out boldly with a story that is as enigmatic as their main character. The thing is, they deploy just enough alluring clues and leading hints to get readers guessing, leveraging what we think we know against what we’re still ignorant of. It’s a trip. END_OF_DOCUMENT_TOKEN_TO_BE_REPLACED