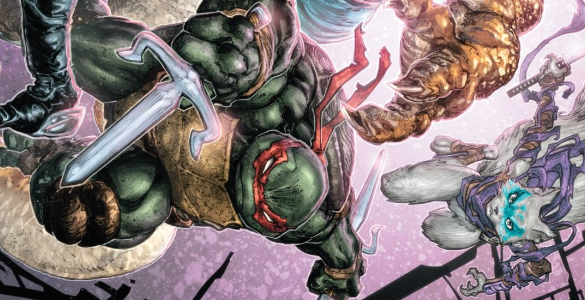 Taylor: Read enough comic books and you eventually begin to take for granted just how magical they can be. This is true of most things in life, whether it be eating pizza or using the internet, but this lesson is especially true for me with comics. When I think about it, the fact that sequential art makes any sort of sense to the human brain — that we can essentially fill in the blanks between panels — is nothing short of amazing. But this isn’t the only unique aspect of comic book making involving paneling, as TMNT Universe 20 so wonderfully demonstrates. END_OF_DOCUMENT_TOKEN_TO_BE_REPLACED

By Taylor Anderson and Drew Baumgartner

Taylor: After all the numerous battles the Teenage Mutant Ninja Turtles have been through, it’s become easy to forget one fourth of their namesake. No, it’s not that they’re teenagers — Raphael’s temper and Michelangelo’s lightheartedness remind us of that every issue. The part of their name that’s easy to forget, rather, is the “ninja.” Even though each turtle knows ninjitsu and uses shurikens, they frequently eschew one of the fundamental traits of being ninja — stealth — and this makes them more akin to warriors than ninja. So what happens when they’re called out on not being the thing they were trained to become since birth? END_OF_DOCUMENT_TOKEN_TO_BE_REPLACED