Drew: As a former sidekick, it’s difficult for Nightwing to define his life without Batman. This is as true outside of the mask as it is behind it — just try to define Dick Grayson without mentioning Bruce Wayne. This makes Dick’s investment in Haly’s Circus (the one part of Dick’s origin story that doesn’t involve Batman) make a lot of sense — it’s his best shot at agency in his life. Dick seems poised to begin a new chapter in his civilian life, yet his costumed life finds him pulled inextricably back towards Batman, as some of Bruce’s oldest foes demand Nightwing’s attention.

Issue 14 begins with Dick picking up Lady Shiva’s trail — a task which requires him to follow up on every murder that happened last night. With an assist from Lucius Fox, Dick Discovers that Shiva had assassinated Wesley Bicolosi, a regulator who had recently discovered a foreign investment loophole which could be exploited for international money laundering. The S.E.C. is currently investigating that loophole, with one Sonia Branch serving as the key witness. Dick suspects that Sonia may be the next on Shiva’s list, and heads to the S.E.C. building to scout for clues. Sure enough, Shiva is there in waiting, and the two duke it out on the roof while Sonia approaches to deliver her testimony. It turns out Sonia is her target, but Dick manages to foil her aim — Sonia gets off with just a close haircut. Shiva escapes, but back at the Iceberg Casino, we learn that she actually succeeded in her goal of intimidating the S.E.C. into delaying their investigation. It turns out Penguin had hired Shiva to protect his interests in that loophole — at least long enough for him to reorganize his money laundering operation.

Let’s stop right there, since that’s an interesting reveal — Penguin was the one to set Dick on Shiva’s trail in the first place. He knew Dick couldn’t track her down in time to prevent Bicolosi’s assassination, and figured a showdown between Nightwing and Shiva would either save him the cost of paying her, or eliminate one more vigilante from breathing down his neck. It’s a clever plan, the kind of which we haven’t really seen the Penguin pull off in the New 52 — his similarly convoluted plans in Detective Comics have made absolutely no sense. This is the first appearance I’ve seen of that character that I haven’t absolutely hated.

But that’s not the last Batman villain we see in this issue — the Joker makes a final page appearance at Blackgate, where he approaches Raya (who, as we’re reminded in this issue, tried to kill Dick and burn down an arena full of innocent people). Joker’s presence is all but obligatory, but the fact that Raya plays into his plans suggests that maybe he knows Nightwing’s identity after all — a possibility I’ve been pretty adamantly railing against. I have NO IDEA how Joker would use Raya either way, but it’s a pretty damning clue that he’s after somebody so close to Dick personally. Also — if I’m not mistaken — Raya knows that Dick is Nightwing (or at least her partner in crime did), so even if the Joker somehow came to her NOT knowing, he could probably get that info out of her just fine.

I suppose it’s a testament to Batman’s draw that I’m so interested in those questions, but the issue spends a great deal of time considering Dick’s independence from Bruce. The whole reason he has any involvement with Sonia in the first place is because he didn’t want to ask Bruce to help finance his amusement mile project. At the same time, he relies on Lucius Fox — a man Bruce bankrolls — for information. Penciller Andres Guinaldo portrays this ambiguity brilliantly in his depiction of Shiva’s first appearance in the issue. 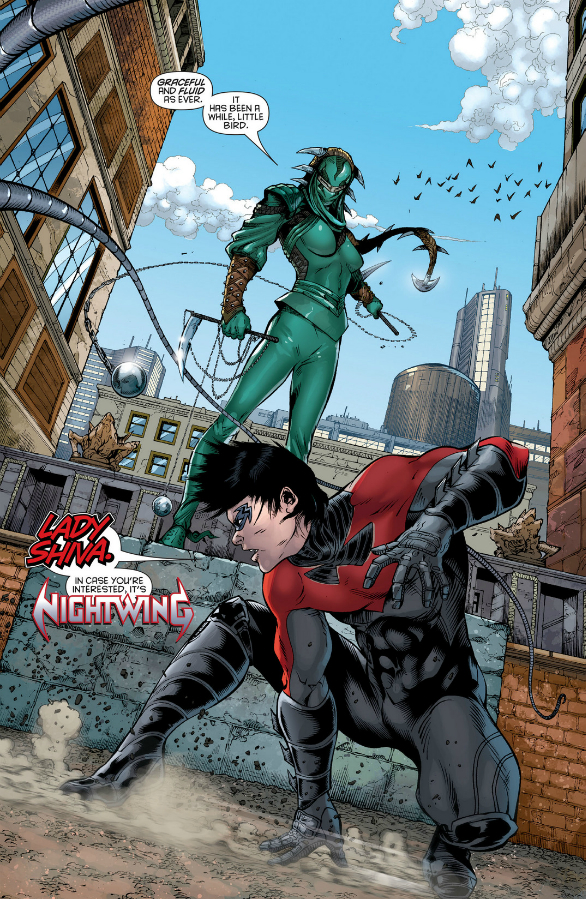 In the foreground, crouched low and off-balance, Dick asserts his identity as Nightwing. Standing over him, with both framing and posture asserting her power, is Lady Shiva — a noted Batman villain. Shiva can’t help but remind us that she has bested Batman, and that can’t bode well for one of his disciples. Behind her is Gotham — inarguably Batman’s city, but the place Dick has very pointedly chosen as his home. The key element here lies in the upper-right corner of the panel — are those birds or bats? Guinaldo cleverly withholds just enough detail to avoid asserting anything about Dick’s identity.

Perhaps my favorite moment in the struggle for Dick’s independence is his conversation with Christina, the acrobat daughter of the trapeze family act Dick has hired to hold the marquee spot at Haly’s once held by the Graysons. Dick has his doubts, but he assures Christina that he can keep her safe. It’s hard not to see that as a promise he’s making to himself — an opportunity to exact the agency he never could over his own life. It may be a little on-the-nose, but it also reintroduces Raya organically enough for her visit from the Joker to have some effect.

This wasn’t a perfect issue, but it handles the closing of this short arc much more satisfactorily than the Paragon story. For a guest-written and drawn arc, this fulfills all I really could have been looking for — a satisfying episodic story and an incremental advancement of the more serialized aspects. I enjoyed the Penguin reveal, and am excited to have Higgins return to see where the Joker is taking Dick over the next few issues. Consider my confidence in this title restored. What about you, Scott? Were you as satisfied with this issue’s conclusion as I was?

Scott: I was. While I agree that this wasn’t a perfect issue, it felt more focused than last month’s issue, and the Penguin reveal was clever and surprising enough to put this one over the top for me. One thing I like about Nightwing as a character is that he never seems bogged down by either of his personas. As Dick Grayson, he’s invested himself into preserving Haly’s Circus, which is really a passion project for him, and when he puts on the mask he’s always really eager to help out, like he just wants to fight some crime and make life easier for Batman. For a guy who could kick just about anyone’s ass at any given moment, he’s incredibly courteous. Maybe his moral purity makes him less interesting than some of the more conflicted heroes, but it makes it very easy to root for him.

I find Dick’s relationship with Sonia just relentlessly funny. Her father killed his parents, but he’s, like, over it I guess, and now he just puts up with her annoyingly ambiguous flirtatiousness. He can’t even be bothered to figure out if she’s trying to ask him on a date because he just doesn’t give enough of a crap about it.

Has there ever been such a reluctance toward the obvious love interest in a comic book before? Again, he’s just being courteous; if she wants to make it a date, it will be a date, but if she just intends to have a business meeting, that’s fine with him too. Think about yourself for once, Dick! What do you want? As if their dynamic isn’t strange enough, later she served as his inspiration to continue fighting Lady Shiva, based on the fact that she chose to go inside the safety of a building rather than stay outside where weapons are being haphazardly hurled near her. How brave.

So that felt pretty forced. Actually, the dialogue throughout the fight scene between Nightwing and Lady Shiva was kind of clunky. As a mysterious, highly skilled assassin, Lady Shiva is very intriguing. But they had to go and ruin that by giving her a bunch of lame things to say. I mean, she tries to justify her ruthless killings by comparing herself to the tobacco and energy industries, like that’s going to change Dick’s mind about her. “I’m not so bad, I’m just like these other things that EVERYONE AGREES ARE TERRIBLE.”

You’re right Drew, it’s really those last few pages that make this issue. DeFalco did a great job leaving me wanting more from each of the key characters. The Penguin is making shrewd moves and finally looks like a character worth keeping an eye on, The Joker suddenly is looming large over the future of this series, and Lady Shiva is hinting that she may reappear soon. In the end, I just really want Dick to prevail. Not for the sake of justice, not because I’ve been waiting for him to get his act together, but just because he’s a nice guy who constantly puts himself at risk to help others who don’t necessarily deserve his help. I don’t think I’ve ever had such an innocent reason to root for a superhero before — I don’t care what he stands for, I just want him to succeed.