Today, Shelby and Drew are discussing Green Lantern 18, originally released March 13th, 2013. This issue is part of the Wrath of the First Lantern crossover event. Click here for our First Lantern coverage.

Shelby: To think about all the various paths one’s life can take boggles the mind. What if I hadn’t moved to Chicago 5 years ago? Picked a different major in college? Gone to a different college all together? Focused on sports instead of the arts in high school? Told Nathaniel I thought he was super cute in first grade? And those are just a handful of big choices (except maybe that last one); if every choice I make has the potential to create a completely new life path, I can’t begin to comprehend the sheer number of lives I could have lived. Going down any of these infinite paths, would I still retain that core “me-ness” that identifies who I am? It’s a fascinating question that was raised with Wrath of the First Lantern last month, and that is rehashed again here.

It’s John and Fatality’s turn in the hands of Volthoom. As the various events of John’s life play out, it seems like the ultimate end for all the potential paths of his life is his own death, either at his own hands after Xanshi or in the Guardian’s execution chamber on Oa. Or maybe he and Fatality should have killed each other, or loved each other, or both, etc.

This issue feels redundant to me, for a couple reasons. Firstly, we get it; we get what Volthoom does. I like pretty much everything about this character; exploring the drastic changes a few minute choices can make in a character’s life is a fun and fascinating exercise. I love his character design: the white/full spectrum color scheme, the capillary-like pattern that represents the infinite paths of people’s lives branching out from their core, it’s all great. But as intriguing and potentially damaging as his powerset is, I can only see this image so many times before I’m ready to move on.

Again, the multiple lives reaching back through John and Fatality’s pasts is neat, but I’m already kind of over it. And the art in this title cannot catch a break. It’s no secret I’ve never cared for the lumpy, disproportionate faces Fernando Pasarin usually delivers, but the angry muscle stylings of Chriscross are, in my opinion, no better. The two are inexplicably nude, and their constantly gaping mouths and the tension in their bodies just makes them look old and ugly. Also, take a look at Fatality’s timeline; is that her as an Alpha Lantern? Even for a “what if?” imagining, that doesn’t make any sense; after John destroyed Xanshi, Fatality spent some time hunting Green Lanterns until she became a Yellow Lantern, which she did until she was captured by the Star Sapphires and converted. The fact that Peter Tomasi specifically explores the idea of John becoming an Alpha makes me think that Chriscross just drew the wrong character, which is a pretty glaring mistake. I did like the panel of the two of them killing each other in space. It’s corny and doesn’t make any sense, but I like it as a simple visual representation of these two’s relationship. 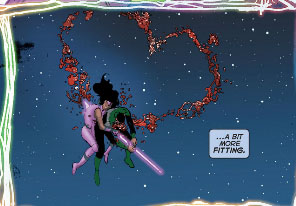 But really, I think the biggest reason this issue is redundant is because it’s John Stewart. He spends all of his time contemplating the many hard decisions he’s been forced to make and dealing with the consequences. We have been beaten over the head with the idea of John as the Corps’s conscience, John as the maker of tough decisions, John as the one to do the right thing when no one else can. How many times have we revisited Xanshi, Mogo, Kirrt? Too many, if you ask me. We all know the decisions John has made in his life, we all know the missteps and we all know the consequences. If Tomasi wanted to continue to explore Volthoom’s powers and plans with John and Fatality, there are a lot more interesting ways he could have taken it. These two have such an interesting and complicated  relationship, one that hasn’t really been explored in a meaningful way; why not use Volthoom as an excuse to see the various ways these two characters’ interactions could play out. A whole issue of panels like the one above would be far more engaging to the reader, and would serve to lay groundwork for whatever route their relationship will take going forward. Instead, we got an awkwardly drawn re-hash of events we’ve re-hashed to death already. What do you think Drew? Am I being too harsh on this issue, or is this a definite loss in momentum in this event that has been exciting so far?

Drew: No, you’re absolutely right, Shelby. This issue was the first misstep for me in this event (to be fair, I haven’t read Red Lanterns 17), though I personally place less blame on Volthoom’s shtick, and more on John’s shockingly redundant history. All of the other Green Lanterns have had their histories dissected and rewritten by Volthoom, so I’m willing to accept that John was due here, but there’s only so many times you can recast “John tearfully kills a thing” before it starts to get tired.

Unfortunately for John, that happened a LONG time ago. Full disclosure: my knowledge of Green Lantern mythology is still almost exclusively rooted in the New 52, so I didn’t even know John had killed TWO planets (I know, I know, I’ll turn in my nerd badge on the way out). I mean, that’s such a crazy specific thing to do, that it’s kind of hard to believe he could do it twice — at least, not if he actually regretted doing it the first time. “Fool me once…” etc. It dramatically cheapens what was a compelling character moment. That would be like Bruce Wayne’s parents being killed again, or having another Robin killed at the hands of a villain (oh, wait…)

My point is, John’s history was already kind of a tired rehash, so revisiting it could only remind us of that, and the way Tomasi emphasizes those moments only highlights how similar they are. That Volthoom’s changes all lead to the same end — John’s death — only makes matters worse. Other entries found Volthoom’s tweaks leading to drastically different timelines. My favorite of these, Green Lantern: New Guardians 17, found Kyle led to some histories that were better, others that were worse, which makes a lot more sense to me, both dramatically AND as a motivator for Volthoom. Remember, Volthoom doesn’t just run on sorrow — he’s feeding off of the entire emotional spectrum, so he might want to bring his victims something other than death. Moreover, Volthoom’s lesson basically boils down to “if you had made any other decisions, you would be dead,” which completely misses the potential for self-doubt that Shelby described in her intro. Like, John might have always regretted killing Kirrt, but to see that the alternative was being killed by Kirrt kind of absolves him of that guilt.

Actually, I think that absolution might be exactly what Tomasi is going for. Ever since the beginning of this event (and the announcement that all of the creatives will be leaving), we’ve been questioning whether this event might be a kind of “reset button” for the Green Lanterns. Given that Volthoom can essentially retcon anything, it would be very simple for him to collapse John’s history to give him just one hard choice rather than three almost identical ones.

That might just be wishful thinking on my part, but you know me — I’m always looking for some in-depth meta-commentary. For whatever reason, I can’t read this issue’s title, “Pieces of You,” without thinking of “Pieces of Me,” the song that Ashlee Simpson famously lip-synched on Saturday Night Live. Let’s be clear: I sincerely doubt Tomasi means for that title to be a reference to that song (if anything, it should be a reference to “Pieces of You,” the second track off of Jewel’s album of the same name, AND THAT WOULD BE ABSURD), but I can’t think of a better example of diminishing returns than the song whose second playing destroyed Ashlee Simpson’s career (okay, “career,” but lets not split hairs here). Further support for this reading? John and Fatality spend the entire issue looking like they’re listening to that performance:

Shelby, I absolutely agree about Chrisscross’ art in this issue. The twisted grimaces we see on John and Fatality throughout this issue don’t convey anguish nearly as much as they remind me of the strained smiles of bad yearbook photos. The draftsmanship in general is pretty wonky throughout (I was particularly distracted by a gun that barrows more from Picasso & Braque than it does Smith & Wesson), but with so much focus on the emotions here, the issue really suffered from the poor acting.

Shelby, you’ve previously noted an inverse relationship in quality between Tomasi’s two titles, so this month’s stellar Batman and Robin should have tipped us off to a sub-par showing here. It’s certainly disappointing, but I think we were dealt a losing hand trying to look back at John’s history. It was never going to be that interesting, which makes me wonder why the writers never had John take any of those alternate paths in the first place.