Mark: Well…huh. Is that all there is?

Writing a mystery story in any medium is an unenviable task. It’s basically impossible to nail the landing. For my money, the ideal solution to any mystery is both surprising and logical. Once the solution is revealed, the audience wants to see that the answer was hiding in plain sight all along. Writing a satisfying conclusion like that is nearly impossible. It’s why when something like The Sixth Sense comes along it is so successful. But M. Night Shyamalan learned the wrong lesson from its success, thinking that audiences craved a “GOT YA” ending. And it’s why his other films that attempted a twist failed. Sure, the twists are surprising…but they’re meaningless and add no additional understanding to what came before. So after two (and a half) strong issues of Peter J. Tomasi’s Detective Comics mystery, we reach the end of The Bronze Age arc and, again, I ask: is that all there is? END_OF_DOCUMENT_TOKEN_TO_BE_REPLACED

Michael: Jim Gordon has been Gotham’s Dark Knight since June and with Bruce descending into the Batcave in the pages of Batman, it seems that Gordon’s rooftop days are nearing their end. That kind of bums me out to be honest. While Snyder’s work on Gordon in Batman has been bombastic fun, I’m not sure that he’s had enough time to engage in the wide array of Batman capers. Enter Pete Tomasi’s three-part story arc: “The Bronze Age.” END_OF_DOCUMENT_TOKEN_TO_BE_REPLACED

Patrick: I was recently putting together a resume for a creative position, and I found myself completely unable to distill what’s special about me into a digestible collection of jobs and experiences. Just by virtue of being a human being for over thirty years, I’ve amassed a weird collection of skills and experiences, and the only reason I can believe that it’s all part of a single lifetime is because I was there to experience it all. I’ve got something of an obsessive mind, and a propensity to burn myself out, so my list of former passions is long. The point is, there’s a lot feeding into the person I am today, and while it’s easiest to say that I am the handful of things that have effected me most recently (i.e.: improviser, writer, comic enthusiast, administrator), that definition is woefully inadequate. The same is doubly true for superheroes, and Batgirl 32 revels in developments from the recent past while acknowledging a history (both real and invented) that demands to be honored.

END_OF_DOCUMENT_TOKEN_TO_BE_REPLACED

Shelby: I love me a good, jovial villain. Any bad guy can be evil and cranky, but when they’re amiable, pleasant, flirty even, that is hands down the best. Those villains are unpredictable and creepy. Best/worst of all: you can almost find yourself liking them. They don’t fit into the standard good guy/bad guy dichotomy, which creates a far more complicated relationship between them, the actual good guys, and the reader. I love complicated relationships with fictional characters (what’s up, John Constantine), so I’m thrilled to see Gail Simone and Fernando Pasarin welcome Ragdoll to Gotham City and Batgirl.

END_OF_DOCUMENT_TOKEN_TO_BE_REPLACED 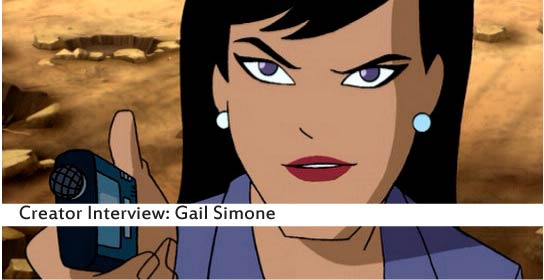 Gail Simone is a busy writer, but even her writing responsibilities on three different titles for three different publishers couldn’t possibly compare to her obligations at conventions. She’s in incredibly high demand, but we managed to pull her away for quick chat about how Batgirl has changed, having an effect on Lara Croft’s legacy and the freedom Red Sonja grants her.

Retcon Punch: It seems like you’re just a huge rock star around here. Has that gotten weirder?

Gail Simone: (laughs) No, it’s just amazing to see the diversity of the people coming through the line, which I think is incredible. All three projects that I’m working on right now — Red Sonja, Batgirl, and Tomb Raider — well, other than Red Sonja, the other two have a pretty wide age range of people that are coming through. Not too many real young kids are coming through here for Red Sonja.  END_OF_DOCUMENT_TOKEN_TO_BE_REPLACED

Shelby: Not that long ago, we had a glut of vampires in popular culture. Twilight, Vampire Diaries, True Blood: we were inundated. It didn’t seem that unusual to me, though; my high school into college experience featured a lot of Buffy the Vampire Slayer and Hellsing (the anime, not the awful movie), so “Vampires did it!” isn’t really that strange of a story for me. Outside of Legenderry and the occasional Halloween issue, though, vampires are not something I expect to see in the comics I’m reading. Needless to say, I was intrigued by the cover of this month’s Batgirl.

END_OF_DOCUMENT_TOKEN_TO_BE_REPLACED

Patrick: Fans of the Geoff Johns era of Green Lantern might consider Johns to be the architect of all conflict in the GL universe. It’s a regularly recurring conflict: basically, the past comes back to haunt the corps. This means a lot of fighting among the various corps (Blackest Night), fighting within the GLs themselves (Green Lantern War) or reckoning with some force responsible for their power in the first place (Volthoom, Relic). But all of this stuff stems from a prophecy that Alan Moore wrote decades ago – promises the eventual fall of Sodam Yatt, the destruction of Mogo, and Oa’s occupation by “demons.” We’ve spend tens of years reading those predictions into fruition, and it’s only now, as the Lanterns appear to have their own shit in order that they realize how utterly dissatisfied they’ve left the universe they swore to protect. For the first time since I can remember, that puts the corps up against a threat  that’s ideological, nuanced, and –most importantly — not magical. There’s no single domino they can topple to quash a universe in revolt against them. END_OF_DOCUMENT_TOKEN_TO_BE_REPLACED

Spencer: They say disaster brings out people’s true colors; some perfectly normal people turn on their neighbors for petty reasons, while others will risk their own lives to rescue total strangers. For Barbara Gordon—at this point still a few years shy of “Batgirl” status—the disaster of the Zero Year brings out her heroic side for perhaps the first time ever. While some of the other Zero Year tie-ins have felt a tad superfluous, this story feels like a first essential step in the heroic legacy of Barbara Gordon. END_OF_DOCUMENT_TOKEN_TO_BE_REPLACED

Drew: Superheroes lead miserable lives. The demands of serialized storytelling require that they are regularly beset by life-altering tragedies, are perpetually unlucky in love, and maybe die once or twice in their career. Month-to-month, it’s exciting, but when you total it all up, the life of your average superhero is unspeakably depressing. Take, for example, Barbara Gordon. Her mother abandoned her when she was a child because of her psychotic brother; her fledgling vigilante career was violently ended when she was shot in the spine; after regaining the ability to walk, she suffered from rather severe PTSD. Oh, and remember her psychotic brother? He grows up to be a serial killer who she now feels guilty of killing. Also, her dad also holds her responsible for killing her brother. Things seemed to be finally looking up for her last month, as she forgot her troubles and went on her first date with a new squeeze, but we all knew it couldn’t last. END_OF_DOCUMENT_TOKEN_TO_BE_REPLACED

Drew: Gail Simone gets Barbara Gordon. I mean that both in that Simone understands Babs’ motivations and has a clear sense of her voice AND that she understands what makes her an interesting character. Early issues of Batgirl featured a fresh balance of uncertainty both under the cape (pertaining to PTSD and survivor’s guilt) and out of it (pertaining to the more pedestrian trappings of being an unemployed twenty-something looking for an apartment). More recent developments in this title (and Batman) have piled on a few more issues, from questioning the trust of Bruce Wayne to guilt over killing her own brother, which threatened to crowd out those elements I loved so much. Issue 22 finds both Simone and Babs taking a step back, separating the bat from the girl, and refocusing the story on Babs. END_OF_DOCUMENT_TOKEN_TO_BE_REPLACED