Today, Mikyzptlk and Drew are discussing Green Lantern 19, originally released April 3rd, 2013. This issue is part of the Wrath of the First Lantern crossover event. Click here for our First Lantern coverage.

Mikyzptlk: Last year, Geoff Johns gave us The Villain’s Journey in Justice League 9, 10, 11 and 12. While that story was mostly bemoaned here on Retcon Punch, Johns has been delivering a much, much better version of “the villain’s journey” since his Green Lantern run first began nearly a decade ago. Almost as much as Green Lantern has been the story of Hal Jordan, it has been the story of Sinestro. Just as we’ve seen Hal’s resurrection and journey of becoming the “greatest” Green Lantern, we’ve seen Sinestro’s resurrection and journey of becoming the greatest Green Lantern antagonist. However, Johns has also shown us that Sinestro, while a fantastic villain, is much more complex than just that. To Sinestro, his aptly sinister actions were always intended for the greater good of the universe, and while those actions were twisted, he eventually found himself wearing a green ring once more. Even with that ring, we’ve still gotten a mixed-bag from Sinestro. Issue 19 of Green Lantern dives deeper into Sinestro’s motivations, and attempts to explain why he’s capable of being the title’s greatest antagonist and ally all at the same time.

Since Sinestro is the star of this issue, let’s start with him. We find Simon Baz held at green-willed gunpoint by a recently freed Sinestro who is demanding to know the location of The First Lantern. Though B’dg and the Templar Guardians try to assure Sinestro they are on the same side, Sinestro flees the scene to Korugar to gather aide for the battle against Volthoom. There, he encounters Officer Arsona who decides to aide Sinestro with all of the might of Korugar simply because he said he needed help (that’s kind of a big deal for him). At that moment, Volthoom appears, and things go from bad to the-planet-Korugar-fucking-explodes. Meanwhile in the Dead Zone, Hal is still struggling with the idea of jumping off a very high ledge when he sees a flood of newly dead Korugarians enter the Zone. Things become clear for Hal who decides to take the leap that leads to his death, and (hopefully) Black Lantern status. In the wreckage of Korugar, Sinestro makes a new vow. 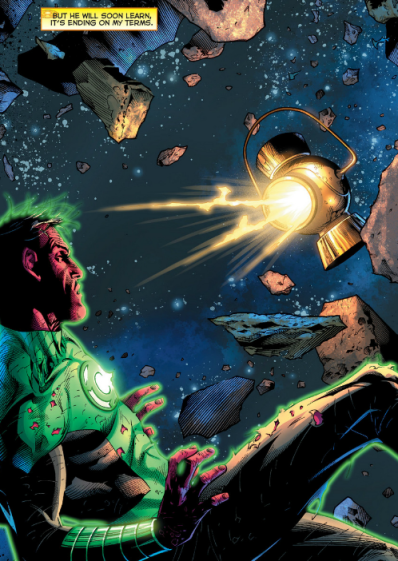 Volthoom has been messing with everyone’s heads lately, a trend that continues here as he puts Sinestro through his paces. Unfortunately for our hard-to-love Sinestro, Volthoom is more juiced up than ever which leads to the first of possibly permanent changes he’s made. This permanence is aided by the fact that The First Lantern isn’t just after Sinestro in this issue, but his entire planet. Like with the other Lanterns, Volthoom begins rooting around in Sinestro’s mind trying to find the best emotionally-rich moments to extort. Volthoom’s attempts are quite successful (e.g. explosions), but what the reader gets in return is far more valuable as Sinestro’s villainous origins are explored.

The First Lantern gives Sinestro a brief glimpse of a life in which he never became a Lantern. We see him rallying his people as they prepare to battle the forces of the Anti-Monitor (squee!). In a more private moment, we see what could have been between Sinestro and Arsona. It turns out that he loves her as much as he loved Arin Sur: 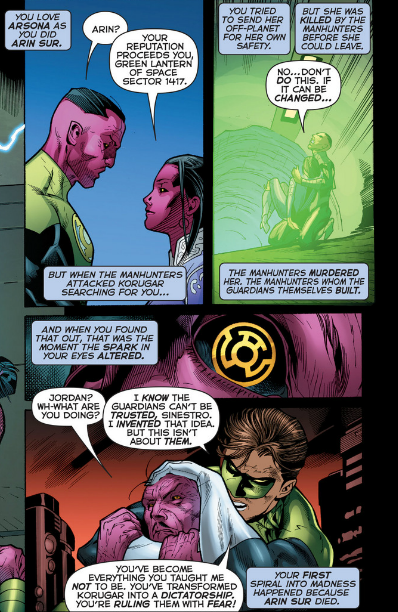 So, Sinestro’s “villainy” stems from his love of Arin Sur which The Guardians took away from him. That, combined with the power of a green ring, caused Sinestro to go over the edge by trying to instill order in the universe he thought the Guardians were incapable of providing. Volthoom wickedly leverages Sinestro’s love for Arin against his love for Arsona, and quickly threatens her life. This allows Sinestro to play hero as he rescues Arsona and protects a group of innocent bystanders. Volthoom threatens Korugar’s destruction but Sinestro vows to protect it, which he does. He even manages to hurt The First Lantern, but it is all for naught as Volthoom simply rewinds the “film” and jump-cuts to Korugar’s destruction. “A world drowning in fear and simmering in hope” is what Volthoom needed to fully charge his reality-bending abilities. I would imagine that Sinestro’s emotions were at play here too though since Volthoom drags him through the emotional mud. First, he makes him think that he’s killed Arsona only to reveal that she’s still alive. Then, he let’s Sinestro think that he’s stopped Volthoom from destroying Korugar only to eradicate it the next moment.

The fact that Volthoom waits just long enough to allow Sinestro a moment to think that he’s succeeded may just be the most vicious I’ve ever seen The First Lantern, which also goes a long way to ensure my allegiance to Sinestro in this story. This is enjoyably shocking to me as Johns once painted Sinestro as the vilest villain ever to confront the GLC, whereas he now paints him as tragically sympathetic. The conclusion of this issue leads me to assume that Sinestro will once again wield the yellow ring of fear. This is something that has me both excited and sad knowing that Sinestro may have to give up being a Green Lantern for good. Regardless of which ring he wields (maybe both?), I’ll still consider Sinestro a hero so long as he fights against Volthoom. Although, I wouldn’t be surprised to see him become a villain, or at least an antagonist of the GLC once again after all is said and done. What about you Drew, is Sinestro a hero or menace? Geoff Johns has shown us very different sides of Sinestro throughout his run, did you enjoy the focus on the character in Johns’ penultimate issue or do you think he should be focusing more on Hal since we are so close to the end? Speaking of Hal, he’s dead…again. Are you interested in seeing where his story goes from here?

Drew: I think the bit that I’m most interested in is that this is Johns’ penultimate issue on Green Lantern. Our discussion on Johns’ departure from Green Lantern was pretty thorough, but nobody mentioned anything about just how he might manage to wrap things up by issue 20. Part of that was probably because we anticipated the Wrath of the First Lantern event to be a bit more crossover-y in nature, but so far, Green Lantern has been the only title with any kind of plot (though I guess it’s possible that a lot more is going on in Red Lanterns than we anticipated — hadn’t they just run into Krona’s ghost or something?). No, it seems unlikely that either Hal’s resurrection or Sinestro’s revenge will happen in another title, so those are likely going to take up valuable page space in the conclusion of Johns’ epic Green Lantern run.

But that conclusion is only one more issue, so it seems like we’ve got to say goodbye to a few plot threads forever. Maybe next month’s issue will prove me wrong, but I get the sense that Johns had a vision for the Indigo Tribe’s involvement here that simply won’t materialize (or, if it does materialize, will feel a bit too deus ex machina to be satisfying). It’s tough — the end of this issue bills Green Lantern 20 as “the end of everything,” but it seems like the other writers will want to send their titles off on their own terms. Like, it would kind of suck for Tomasi, Bedard, and Milligan to have their last issues on these titles abruptly end with a conclusion in another title.

Then again, issue 20 is going to be 64 pages (which explains where Doug Mahnke has been the past few issues), which is basically three issues. I suppose that feels more like the big send-off I was hoping for, and being an entire act unto itself kind of justifies the decidedly sorry situation it leaves Hal and Sinestro in here. Still, I’m not sure we’ll get to all of the Indigo stuff implied earlier in the run. I know that that’s kind of the nature of big, expansive narratives (I’m still waiting to hear what the deal was with the Hurley bird), but I was so excited by the potential for the Indigos to play a key role in defeating (or, rather, converting) the Guardians.

Okay, enough about issue 20 — I’m supposed to be talking about this issue. By this point, we’ve seen the First Lantern rewind time and manipulate events, but this is the first time we’ve seen a real, physical consequence of those actions. Until now, it’s been very unclear whether his actions are actually changing the past, or just his victims’ memories, but the arrival of a planet-ful of dead Korugarians demonstrates that he actually rewound the clock and actually killed all of those people.

The ability to manipulate emotions and time feels like a bit of an arbitrary power-set, but — as we’ve suggested before — they make for a strong analogy to the powers of comic writers. While it looks like the First Lantern is the one tweaking Sinestro’s history, it’s really Johns who is making the lasting emotional changes, suggesting that Sinestro loved Arsona all along.

Action movies often have their hero motivated by the loss of a loved one, only to later fall in love with someone new, which has always struck me as kind of undermining the significance of that first love. Moreover, it often feels lazy, like the writers knew that loss and love were emotionally charged, so threw them together because the hero needs a love interest no matter what their history is. Johns sidesteps this a bit by showing that Sinestro never actually acted on those feelings — this is strictly a “what if?” scenario — and by openly acknowledging the manipulative nature of it. The First Lantern is being openly brazen about making things as emotional as possible, which frees up Johns to take some cheaper shots than he might attempt otherwise.

All in all, this issue concludes a kind of classic second act: the heroes are at their absolute lowest point. For Sinestro, that means he’s lost his home, planet, and anything and anybody he’s ever cared about. For Hal, it means he’s lost his life. Those are big losses to come back from — even in comics — so next month should be an exciting conclusion, even if I have my reservations as to just how satisfying it will be.