Shelby: I’ve got a big project at work right now that is causing my team some major headaches. Half the guys do their own thing, causing the other half no small amount of frustration. I feel I don’t have the time to do my portion as well as I would like, which leaves me extra frustrated as well. It’s easy to forget that we’re all on the same team, with the same goal: finish this project so we don’t have to work on it anymore. It’s even trickier for the Thunderbolts, in that they aren’t actually on the same team, they don’t actually have the same goal. Also, they’ve got a little alien problem.

Things are coming apart at the seams. Deadpool split from Elektra, Punisher, and Venom, claiming boredom and hunger. Back on the sub, Thaddeus frets over being left behind, while Red Leader glosses over the fact there are a few incoming bogeys. 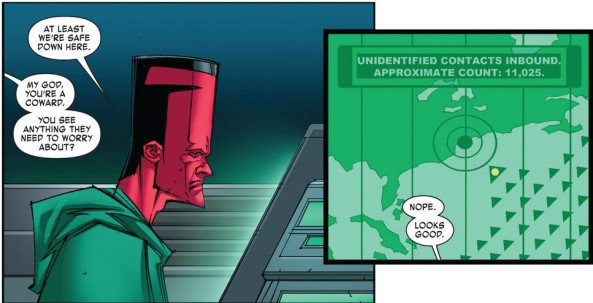 Electra, Venom, and Punisher manage to find the only criminals in the city willing to rat on the Paguros, and Deadpool gets mistaken for a down-on-his-luck Spider-Man on the subway, so things are looking up for everybody, until the alien attack hits. Mercy is excited because everyone is suddenly thinking about death, and Red Leader decides the best course of action is to take the sub to the surface where they are instantly spotted.

This issue made me feel like shouting, “The plot thickens!” and disappearing into the night. I love how casually Red Leader seemingly betrayed the rest of the gang. I tried to read up on Leader to get an idea why he would turn on everybody; his backstory is appropriately confusing for a Marvel villain, but I was able to glean enough info to wonder why Thaddeus trusted him to the team in the first place. Are there really so few super-powered geniuses in the Marvel Universe Thad had to repower and hire this one?

As neat as the betrayal and big action alien attack is, Charles Soule really hooked me with the team dynamic. In issue 14, Deadpool referred to the group as the “selfish Avengers,” but I think Bizarro Avengers would be more accurate. Any time you have Deadpool on a team, things are going to get weird; added to that is killing-machine Frank Castle, kind-dumb-with-a-heart-of-gold Flash Thompson, and … Elektra. Honestly, I haven’t been able to get a good read on her yet; the only thing I know about her is she’s hooking up with Frank. Now, he’s the interesting one. It’s no surprise to me that Frank would torture a bad guy to get some info. Heck, I’d be surprised if he didn’t torture a guy for info. But he blew up those hoodlums they picked up for no reason at all.

They didn’t have the information he needed. They weren’t committing any crimes when they were caught. To the Punisher, those are just minor details.

It’s interesting to compare this team to the team forming in Mighty Avengers. There, Luke Cage is trying to form a team to do good. He wants to make the world a better place. Here, Thaddeus has formed a team to simply do. Sure, the “previously on” page says they’re out to rid the world of evil, and technically Frank’s mission to tamp down crime in NYC is for the greater good, but these guys remind me of little more than a group of people with a list of tasks to accomplish. Deadpool was right to call them the Selfish Avengers.

Speaking of Deadpool, he is hands down my favorite here. That’s really no surprise, as I think Deadpool is automatically everyone’s favorite whenever he’s included in anything. The running gag of him always getting mistaken for Spider-Man when he’s in New York is delightful, as is his weird obsession with The Devil’s Advocate. My favorite moment is, hands down, when he goes to rescue a woman and her baby in a cab.

Patrick, your thoughts on this issue? Does this cut down on the Red Sky Effect and serve as a better Infinity tie-in than last month’s issue? Is Charles Soule becoming your latest “I’ll read anything with his name on it” author? Because he is for me.

Patrick: Y’know, we can call a comic book whatever we want: we can label something as a one-off or a Red Sky crossover or a tie-in or a wheel-spinner or whatever, and all that’s going to matter is whether or not the issue itself tells a compelling story. Thunderbolts‘ involvement with Infinity may be totally coincidental and absolutely ancillary to whatever the series’ core tenants are, but it’s just chaotic enough to really work for me. Shelby’s right to focus on how different the characters’ values are — no one else would have blown up those thugs just ‘cuz — and throwing in an invading alien force just makes that murkier. They’re not reluctant heroes, necessarily, it’s just not what they set out do.

I really like the idea that Thanos’ forces coming to Earth could either have the effect of unifying the team behind a real cause they can all agree on (for once) or not. I hadn’t even considered the possibility that anyone on the team would have flat-out rejected the call to defend New Yorkers from an alien army, but then, I’ve never read much Punisher before. And that invading force is such a great interrupting threat — with the exception of that Red Leader’s hilarious subterfuge, we don’t have have any hint of what’s really happening in this issue until page 13, when artist Jefte Palo pulls back the curtain to reveal the real stakes. 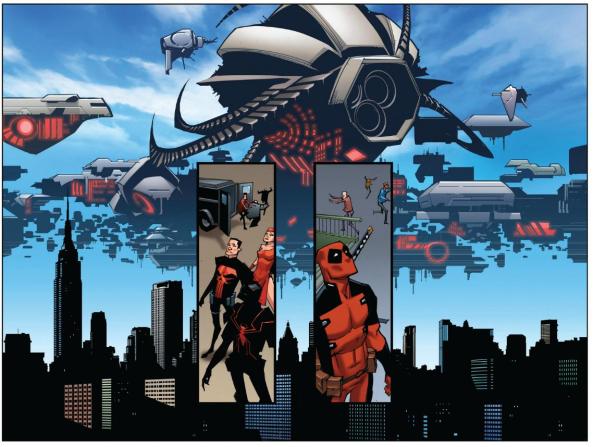 The two pages leading up to this splash are also totally awesome: they each follow either Venom or Deadpool as they start to suspect something HUGE is happening, and both pages end with a panel of the character with their necks craned skyward. It’s a little too soon to see what the team’s actual response is going to be, but even if Punisher demands that they all stay on-task, this is a mission hiccup that’s too big to ignore. Also, is it just me, or do those two panels of the Thunderbolts jutting out of the New York City skyline as the city is about to be attacked recall the World Trade Center towers? I don’t think there’s a bigger message here, other than to suggest that when shit gets real, everyone helps out. We’ll see how clearly these guys register that message next month.

I do have Soule on my list of read-whatever-he-puts-out. (I liked to keep oddly titled lists around the house.) This was a stuffed week for him – all three of his DC Villains books came out this week AND there’s this. True to the company flag it flies, Thunderbolts is a lot more fun than any of the three other books he wrote this week, but that is — in large part — due to the tone set by Palo. His style is so cartoony, proportions and expressions are drawn with maximum elasticity, but Palo’s obsession with depicting all this joy and energy with dark, straight lines grants the whole issue some semblance of control. My absolute favorite scene in this issue is the little girl asking Deadpool why he (as Spider-Man) is taking the subway. Deadpool is sweet enough not to spoil the illusion that he might be Spider-Man — she just looks so happy to meet him! — and makes up some story about running out of web fluid and not having money for a cab. When she goes back to her mom so she can give her new pal Spider-Man a few bucks? Jesus, it’s so cute I almost lost my mind. It’s that goofiness mixed with a twinge of sincerity that Palo excels at. 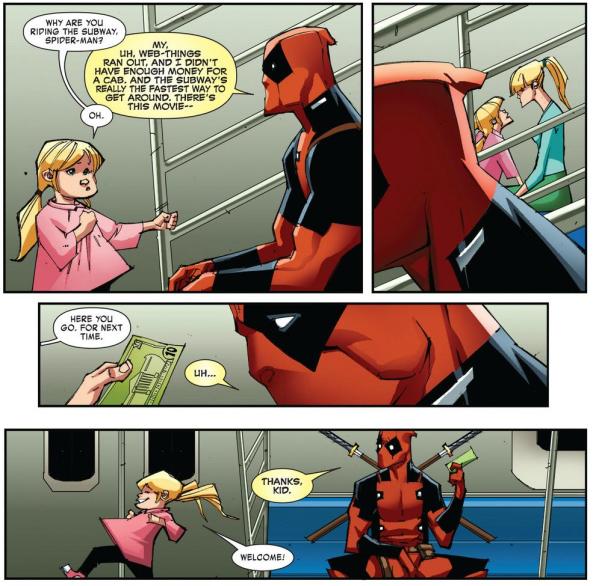 We had someone comment on our last Thunderbolts write-up that didn’t seem to like the direction of this series – implying that it’s not a good fit for a character like Frank Castle. I think Soule might see that too, but he’s going to play that outsider perspective for all it’s worth, and I look forward to seeing Punisher’s monomaniacal quest to rid New York of the Paguro family grind up against the secret heart of this series. Hey, cuteness and heroism don’t mean much unless you have to give up on your selfish goals to pursue them, right?