Scott: It’s not enough just to tell a Batman origin story anymore. We know that story. The Bruce Wayne story. Bruce watches his parents die, he runs away, he trains, he becomes a great warrior, he returns to his city and his fortune, he fights crime, yada yada yada. It’s a great story and it’s fun to read, it’s just that, in this Bat-saturated day-in-age, it’s not enough. It’s not enough to see how Bruce Wayne becomes Batman, we need to see how Batman becomes Batman: The Legend. Finally, Scott Snyder is giving us a look at how the myth of Batman is born, or rather, carefully constructed by Bruce and his trusty aide, Alfred Pennyworth. The ensuing story doesn’t just feel like new. It feels like enough. (And I mean that in a very good way.)

Batman 24 opens with a scene we’ve seen dozens of times in comics, films and on television: a group of criminals are toiling away in the dark of night when one of them becomes afraid. Afraid of the masked vigilante they keep hearing about, the one who lurks in the shadows. Of course, the leader of the group denies the existence of this figure, writes it off as a myth, but it’s the familiarity of this doubt that solidifies the truth behind the fear. This scene always plays out the same way and we know it. Scott Snyder knows it. Does that mean it’s overdone? Lazy storytelling? Hardly. This scene reoccurs so often because it is an essential part of Batman. Batman doesn’t exist without the fear. Or the doubt. This is Snyder letting us know, before we see it, that Batman is out there. Be afraid.

So, at last, we have Batman. It feels good. But his presence won’t stop the Red Hood Gang. In fact, it will only hasten their efforts. Bruce knows the Gang has been stealing large quantities of chemicals from around Gotham, but can’t figure out their end game. And he’s running out of time. Finally, he sees it: they’re planning to explode poisonous chemicals all around the city on the 15th anniversary of the murder of Thomas and Martha Wayne.

Bruce leads TV crews, and the cops, to the chemical plant where the Red Hood Gang is operating. The gang causes enough of a distraction to allow Bruce entry into the plant, where he enacts his own plan- with Alfred’s help. They shut off the power at the plant, and in the darkness Bruce becomes Batman. But they’ve fiddled with the Gang’s night-vision goggles to make it look as if Batman saves Bruce.

This is a brilliant touch by Snyder. As Alfred later says, “Batman’s legend begins with the rescue of Bruce Wayne. Their separation is cemented into the foundation of the mythos.” Now, no news stories, water-cooler conversations or playground chatter could ever speculate that Bruce Wayne is the man behind the mask. Batman’s veritability comes from being seen alongside Bruce Wayne. Alfred’s larger point is that no one will connect Bruce to Batman simply because they want to believe in Batman as something larger than life – and believing means never knowing who is under the mask. I like this idea, too, but I also think there’s enough cynicism in Gotham that somebody will eventually point out that Bruce always has to run to the bathroom right before Batman appears. Making this distinction between them will go a long way.

Batman stops the Red Hood Gang and, as the chemical plant is going up in flames, attempts to save their leader, Red Hood One. Instead, Red Hood One willingly dives into a vat of acid. End of story, right? Not so fast. Other Gang Members identify Red Hood One as Liam Distal, whose body is soon found not in the vat, but rather in a barrel of lye near Amusement Mile. Translation: at some point, someone killed Distal and took over as Red Hood One, though it’s impossible to say when this happened. Bruce even speculates that the man who fell into the vat wasn’t Red Hood One, but some patsy, while the real leader of the Gang — the guy who killed Distal — escaped into the night.  It’s certainly tempting to believe this theory as part of an origin story for the Joker.

My brother Drew, a much more astute reader and well-versed Batman historian than I, made a great observation about this issue. The name Liam Distal is likely an oblique reference to early Batman writer Bill Finger (Liam being the Irish version of William; distal meaning a part situated far from the center of a body, ie. a finger or toe). Oblique as it may be, the reference does have some significance. Many believe Finger played a role in creating Batman, but since Bob Kane takes sole credit for the character, it’s unclear how significant Finger’s contributions may have been. It’s also unclear what role Liam Distal plays in this story, and whether Bruce ever interacted with him at all, but it remains possible that his actions led directly to the creation of Batman. I’m sure Spencer or Drew will have deeper insights as to what Snyder means by this reference (as well as the more direct and unflattering reference to Bob, that is Phillip Kane).

So Spencer, what was your take on this issue? I was blown away by Snyder’s effort to build up the myth around Batman, but there is so much else going on that I didn’t get to mention. Also, at the beginning of the issue we’re introduced to a Red Hood member who claims to be a chemistry teacher. A chemistry teacher who turns to a life of crime? Am I allowed to take this as a nod to Walter White, or is that just my grief over Breaking Bad ending getting the better of me?

Spencer: You know, I’ve still yet to actually watch Breaking Bad (it’s in my Netflix queue I swear), but it’s still the obvious connection to make to that Red Hood member, so nah, I don’t think it’s just grief.

As for the Bill Finger and Bob Kane observation, I too think it’s spot-on (nice work there Drew), but comparing Philip Kane to Bob Kane might actually be letting Bob Kane off too easily. Philip Kane ultimately redeems himself in this issue, giving Bruce vital information and sacrificing himself to save Batman’s life (and he doesn’t even know Batman is Bruce, thus making his actions even more selfless), while Bob Kane…well…let’s just say that, while we may never know the exact circumstances behind Batman’s creation, history makes a pretty damning argument against Kane. Check out this article about Bob Kane from ComicAlliance’s Batman Historian Chris Sims (and while you’re reading it, be sure to check out the picture of Bob Kane’s tombstone—yikes—and the linked article about comic legend Jim Steranko’s encounter with Kane). I dunno, ol’ Phil is starting to look like a saint in comparison.

Anyway, I think Snyder’s biggest success with Zero Year so far has been the fact that he’s created an origin story that is respectful and, to an extent, even faithful to what came before, yet he’s also very much made it his own, and this issue exemplifies this, down to its tiniest details. Take this scene with Commissioner Lieutenant Gordon, for example: 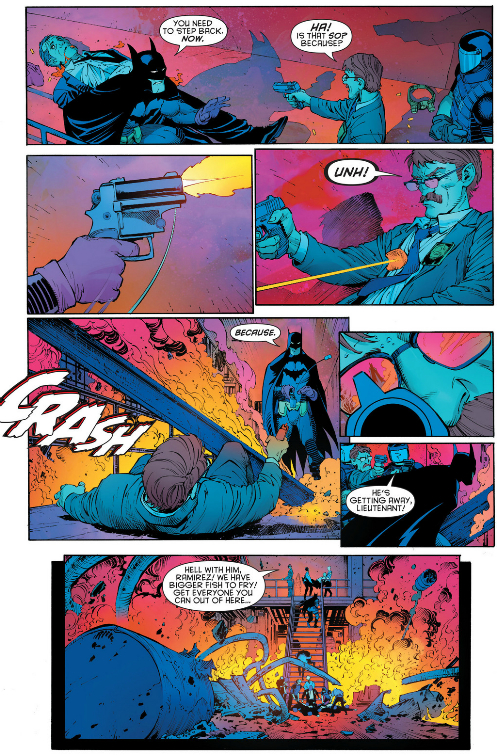 I don’t know how many of you have read early Batman comics, but the first year or so of his publication (back around 1939-1940) looks very weird to modern readers, and a large part of that is because Batman was still developing as a character. For example, for the first few issues he used guns. It wasn’t uncommon to see Batman straight up pop a cap in his opponent Grand Theft Auto style, and one title page even has Batman hunched, about to attack, his hand on a gun in a holster on his utility belt. It’s all very disarming to read nowadays, and I can’t help but view the above scene with Gordon as a reference to those old issues. Just like in those old issues, it’s disarming to see Batman pull a gun on Gordon, but it turns out it’s just a bean bag gun, and it seems to put just enough doubt in Gordon that he allows Batman to escape. Again, here’s Snyder referencing what came before, but clearly making it his own, and I love it.

(The rest of this issue was filled with other Easter Eggs too. Take a look again at that first image Scott posted; it’s a loving homage to the cover of Detective Comics 27, which featured the very first Batman story: 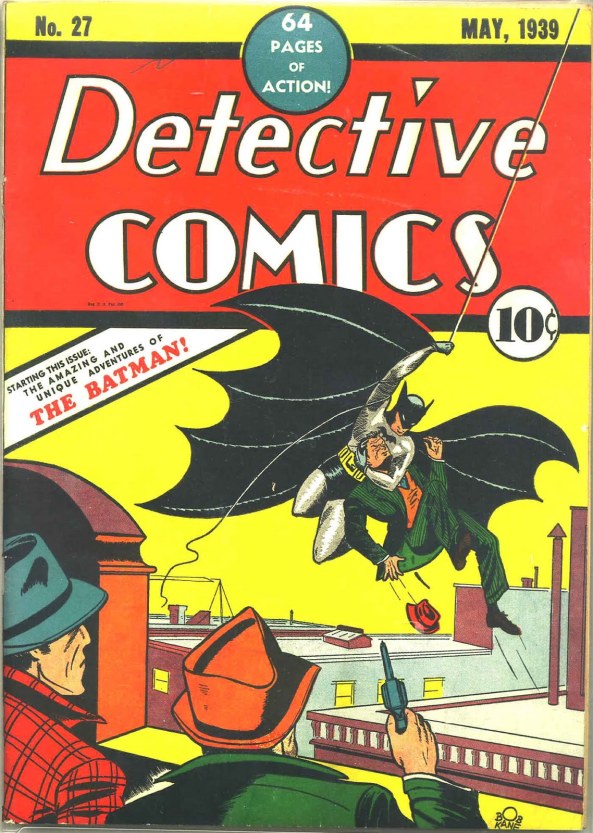 Batman’s prototype costume here also comes equipped with garish purple gloves, which was a feature of Batman’s original 1939 costume, and hey, did any of you notice any familiar Gotham faces on Philip Kane’s wall?

A story cannot subsist of references alone, but when the story is as strong as what Snyder gives us this issue, than finding these Easter Eggs turns into a fun game and a thrilling compliment to the rest of the issue.)

Snyder also gives us Bruce’s stirring monologue on why he loves Gotham City. Bruce claims that Gotham puts its citizens to the test and brings them out as better people in the end, which is a theory Snyder has been pushing ever since his earliest Batman stories with Dick Grayson over in Detective Comics. While I love the idea of treating Gotham like a character in its own right, I’ve always had a tiny bit of an issue with this interpretation. I mean, it’s all well and good if Gotham makes you a better person, but you’re much more likely to die or become a villain than to make it through in one piece, and personally, I’d much rather live a life of wasted potential in some other city than die bettering myself in Gotham.

Despite that, though, I enjoyed this scene. Bruce’s speech is a welcome, uplifting contrast to Red Hood One’s nihilism, and it goes a long way towards not only justifying why people actually stay in Gotham, but also to explain why Bruce is so adamant about protecting it above all else. Gotham is so important to Batman that it becomes important to me as well, no matter how much I’d hate to actually live there.

It probably goes without saying, but Snyder doesn’t deserve all the credit on this issue. Penciller Greg Capullo (and the rest of his art team) does amazing work as always. I love his new Bat-suit design; it doesn’t look sloppy or hastily thrown together, but it’s still obviously a first draft.

With this issue’s expanded page count, meanwhile, Capullo has the chance to go all-out with his fight scenes, bringing us battles that are dynamic, brutal, creative, and occasionally even humorous.

Honestly, this issue was just an absolute joy to read. I actually got into a minor argument with some random guy on Twitter about whether $6.99 is too much for a single issue, but whether it is or not, I think it was worth every single penny (giant or otherwise). There’s something for everyone: exciting, cinematic storytelling and action, insight into Batman, Bruce Wayne, and Alfred, a respectful Joker origin story and equally respectful homages to Batman’s past, gorgeous artwork, and even a chance to dig deeper and assign this story our own meaning. Zero Year might just be the best year ever.