Patrick: IDW’s Teenage Mutant Ninja Turtles has been something of a revelation for me. As an adult, I have been delighted to see the teenage-ness of these characters explored for the universal tragedy we all know it to be — isolation, anger, confusion. That’s hard shit that we all went through. These last couple issues at Northampton have allowed the creative team to meditate on those feelings against the quiet backdrop of some uneasy healing. But damn it all, they’re also ninjas. That means that part of their experience, part of the way they process their emotions, is through violence. Issue 32 trades in its quiet moments for explosive action beats, and while it’s harder to relate to that kind of resolution, the fact that it works so well for the Turtles reminds the readers that, for all we have in common with dorky teenagers, they are warriors and their salvation comes from making war.

We pick up at the literal instant we left off last time: Leonardo has taken up his colors and is ready to defend his family from Koya and her attending assassins. Raph’s outside, really reinforcing his trust issues by accusing Alopex of betraying them, so the good guys and the bad guys are evenly numbered in the barn. One of the assassins sets off an explosion, which disorients our Turtles, but also alerts the O’Neils to the action in their barn. April tries to cover it all up, but her mother insists on going to check it out. Back at the barn, Raph turns the odds back in our heroes’ favor and the threats are subdued.

Then we get Leonardo back in a familiar place — he’s got an enemy on the ropes and is prepared to land a killing blow. Leo’s got a hell of a relationship with murder, particularly in light of Shredder urging him to kill Raphael at the close of City Fall. The poignancy of that moment doesn’t go unnoticed by anyone, and artist Sophie Campbell allows for a pregnant pause with each of the characters — none of them making a move to stop him or effect his actions in any way. 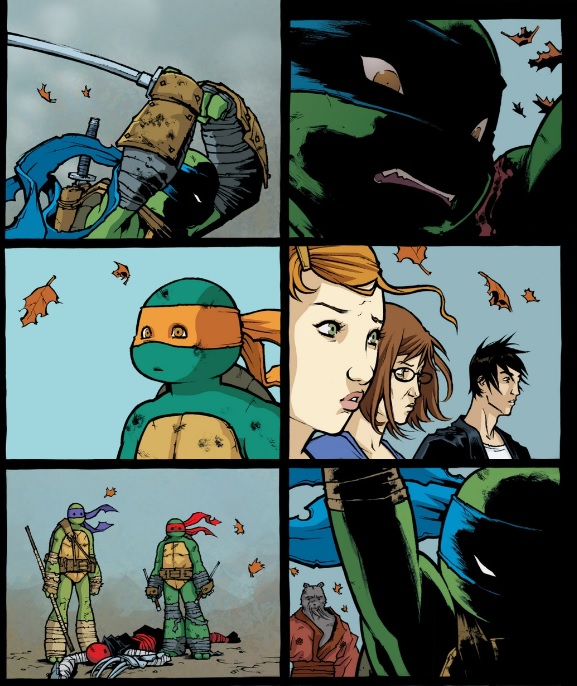 In fact, the only action, the only motion in this sequence is the falling of the autumn leaves. Those are leaves, by the way, that had not been falling at any other point in this issue. Last month, I made a point of how falling leaves marked Leo’s return to fight for his family, and they come again here as Leo is put in a position to choose his actions. Naturally, he doesn’t kill Koya — it would be way too crazy for him to actually kill her — but it’s the fact that he is allowed to make the choice on his own that distinguishes his relationship with with family from his relationship with the Foot. His family just wants him to be himself, and by extension, part of their group, whereas Shredder wanted Leonardo to be a weapon.

This is an extremely well-written moment, not for its broad strokes but because of the specificity. When you take a step back, all of the choices seem laughably obvious: Leonardo was always going to choose his family over the Foot and he was always going to let Koya live. But Leo is allowed complete agency in this moment, and he selects the path of the noble, merciful warrior. In effect, he is reclaiming his identity, instead of having it forced upon him by his family.

So much of this issue is action, I was kind of thrown by it at first. After so many issues of quiet contemplation, it was pretty fun to see the whole team kicking into action. I especially like seeing Michelangelo landing his flying-motorcycle blow. 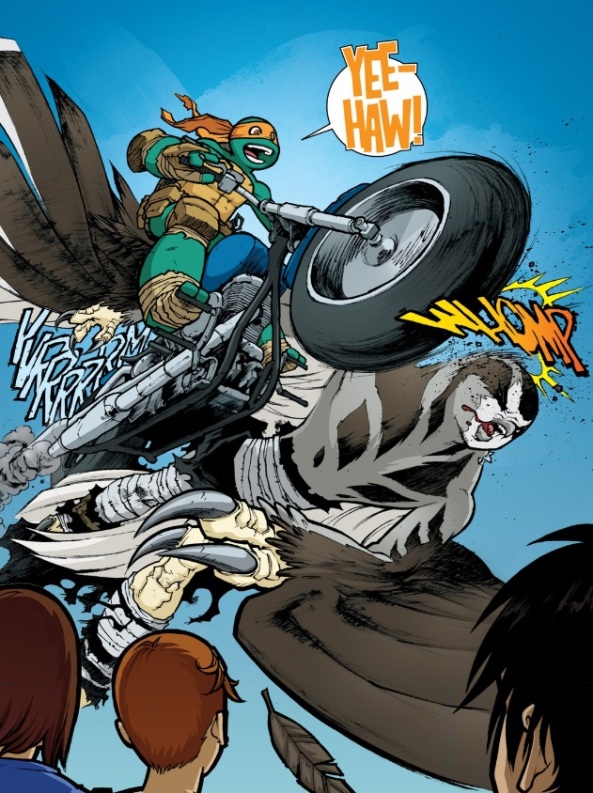 It’s silly, over-the-top action, but it’s exactly the kind of energetic — if sorta goofy — moment needed to break up the brawliness of the rest of the issue. Also, I know Ethan had at one point lamented Campbell’s chibification of the Turtles, but come on: how can you say know to the smile on Mikey’s face there?

The issue ends with our heroes returning to New York City, and Splinter vowing to bring the fight back to Shredder. It seems, they’ve been running for too long. That’s not only the natural trajectory for a Teenage Mutant Ninja Turtles story, but it’s necessary for the characters. For as much as we can get out of the peaceful moments, the Turtles find their meaning from kicking Shredder in the teeth. They’re ninja: it just makes sense.

Drew, I do find two parts of the resolution here a little unnerving. First, it’s a bummer to see Raph backslide into not trusting Alopex, but then he also does nothing to fix their relationship after she rescues him. It was one of those “go after her, you idiot!” moments for me. Second, what’s up with with that healing ooze? That’s some fast-acting shit right there. Plus, the miracle of Mr. O’Neil walking for the first time in years is glossed over in favor of an awwwwww moment that doesn’t quite land with the oomph that I want it to. Northampton was never about “does April have friends?” it was about “how does Leo learn to trust again?” It’s just a weird button, right?

Drew: It’s definitely not the most intuitive note to end on, but I’d argue that it fits in spirit — all of this arc’s pet themes of family, trust, and healing are there, just not necessarily in the context this issue so elegantly illustrates.

As for the “go after her, you idiot!” moment, I think that plays exactly to the teenageriness of this series. Like Patrick, I was young enough at my first exposure to the Turtles for “teenage” to be synonymous with “grownup,” so I absolutely love returning to these characters with a different perspective. It can be frustrating to see a character I care so much about fuck up a relationship because of trust issues or pride, but only because it’s so brutally relatable. That Raph doesn’t know what to say or how to say it feels totally genuine. It’s apparent how much it frustrates him — he goes on to bag two of the assassins (while Donnie and Mike net only one between the two of them) — which makes my heart break just a little bit for him.

Indeed, while I’m with you on loving the slower pace of the past several issues, I was actually able to find a lot to relate to in all of the violence here (and not just because I’m a ninja). Specifically, I was moved by the notion that the Turtle’s quiet, peaceful place of reflection was taken from them here. It’s a cruel loss of innocence tale combined with an implied “you can’t go home again,” which are both subtle tragedies every adolescent faces. That this destruction was the result of their own baggage only adds insult to injury, and again, is relatable to anyone whose old stomping grounds are haunted by the memories of teenage drama.

Patrick, I’m also totally enamored of that pregnant pause where Leo is about to bring the hammer down on Koya, and I think you’re right to contrast this with that scene in City Fall with Raph. For me, the fact that nobody moves even to cower in fear illustrates the difference in ideologies between Shredder and Splinter. There’s no doubt in my mind that nobody watching Leo wanted him to kill Koya, but more than anything, they wanted Leo to make that decision himself. Shredder, on the other hand, couldn’t care less about what Leo wants — so long as he ultimately does what Shredder wants.

Campbell plays that sequence with just enough darkness to make me worry that Leo might pull the trigger. I think that’s largely thanks to trading in last month’s gorgeous ink washes for those stunning dry brush effects. The effect is much harsher — reflecting Leo’s own residual darkness — and Campbell brilliantly varies its intensity over the course of the scene. Notice how Leo becomes increasingly more shadowed as that pause stretches, only to quickly disappear when he finally lowers his sword. It allows the battle for Leo’s soul to subtly play out before our eyes, all while keeping us focused on the action outside of his head.

Last month, I mentioned in the comments that mutants or no, this series may have the most realistic teens of any book I’m reading. I’m often uncomfortable with the way our society fetishizes teen life (I’m pretty effectively icked out by any tv show or movie set in high school), but this manages to dramatize adolescence in a way that doesn’t lionize so much as frankly illustrate. It reminds me of my teenage years without glamorizing it in any way. Plus, it has mutants, ninjas, and mutant-ninjas. What more can you really ask for?