Michael: It wasn’t that long ago when Retcon Punch decided to pit me and Spencer against one another, reviewing Batman Eternal 52 with very different opinions. Now they’ve done it again as we go head-to-head on the finale of the semi-sequel, Batman & Robin Eternal 26. As we transition back to the status quo, does this particular Batman-less Batman tale add anything to the mythos overall?

A question that I’ve found myself asking time and again with Batman & Robin Eternal is: whose story is this exactly? It poses itself as an ensemble book starring all of the Robins, but that’s not necessarily true. Batman & Robin Eternal 26 seems to argue that Harper and Cassandra are the stars of the book, or at the least its future. That shouldn’t really come as any surprise, since one of the themes of the book is legacy and inheritance. And while I’m all about developing/re-introducing these female crimefighters into Batman’s world, I don’t necessarily love the execution here.

The final showdown between the Robins and Mother and her legions felt like it has been in perpetual climax for about five weeks now. Mother claims that the heroes have already lost and eventually all of the world’s children will be under her control. Mother’s threats of world domination have always felt empty because A) good guys win and B) her plan has already been enacted, as she has scores of cities under her control. It feels like Mother is just saying “You fools! The much-ness of my plan will become much muchier very soon!” The tension isn’t there for me, and I’ve been bored with Mother’s threat ever since she launched Icthys from the get-go.

While “murderous/soulless zombie children” is a creepy concept; I’ve never felt that Mother was a particularly scary or intimidating villain. Since Dick is the de facto leader of the Robins, we get to see him and Mother simultaneously trade blows and philosophies in typical hero/villain fashion. Mother leans heavily on how Dick’s world is full of “madness, death and destruction” and how she helps her little child killers reach their potential. She even manages to have her secret volcano base display video of how terrible and violent the world is; I bet she’s great at PowerPoint.

The horrors of programming a child to become a killing machine were never fully realized in Batman & Robin Eternal. If a major part of the series is Cassandra Cain’s journey from weapon to hero, then it never felt like an arduous one. I’m happy that Cass is back in continuity, and since she can’t be Batgirl, I suppose I’ll settle with her being a Batman-approved hero as Orphan (though I’m not so sure carrying on her nutso Daddy’s moniker is a very healthy choice). Barring Harper’s brief silent treatment and murderous plan fake-out, Cass was immediately welcomed into the fold. What I’m getting at is this: James Tynion and co. never seemed to be interested in making Cass work for the trust of our heroes. It’s as if Cassandra Cain becoming a hero was a foregone conclusion, and Tynion didn’t care to pretend it was ever going to be something else. Cass did take the cliched bullet for Harper, so I guess she must be a hero.

What about our dear Harper Row? I suppose my biggest critique of her story in Batman & Robin Eternal 26 is that little flashback that the issue opens with. It sure is nice that we get a picture painted for us of how much of a saint Miranda Row was, isn’t it? Needless dead mom character moments aside, I enjoyed Harper’s response to Mother’s call to the dark side. This bit of Harper Row exposition I liked — as she beat down Mother and told her that she didn’t know shit about shit. Harper’s little autobiography underlined the complexity of any given human being and how their trauma can’t be similarly quantified. Maybe it’s because I found Mother and her plans to be so bland and vague, but I was all about this moment of the book.

While I found myself barely tolerating Batman & Robin Eternal, I suppose it does its job of further cementing Harper and Cass in Batman’s world. The Robins themselves never really captivated me and merely devolved into parts of the Batman-less Bat-family that fought against Mother.

Spencer! I actually didn’t have as many negative things to say about this issue as I had anticipated — huzzah! How did you feel about the finale to Batman & Robin Eternal? While it was nice to see Batman return at the end of the book to touch base with everyone, did you feel like it undercut anything that the Robins had achieved on their own? It kind of felt like “we don’t need Daddy’s approval…but it sure is nice that we got it!” Had you grown tired of Mother’s machinations like I had? Since she died in typical off-panel fashion, I’m assuming we’ll see her again someday…

Spencer: I’m assuming that too, Michael, partially because of tropes, but also because we’ve seen Mother return from the dead before (in the flashbacks, after Batman witnessed Mother’s death and sought out her origins). Actually, my biggest complaint about Batman and Robin Eternal 26 is simply the unresolved questions. How did Mother come back from the dead? Also, what’s the deal with that list of names from way back at the beginning of the series? If it’s a list of Mother’s children, why were Dick, Jason, and Tim on it? If it had another purpose, what was it? None of these unanswered questions directly impact the plot of this issue, but as a finale, it’s a bit frustrating to see it leave plot points dangling, especially ones that seem (or at one point were presented as being) so vital to the story.

To answer your other question, Michael: there was one major reason why Batman had to make his reappearance in this issue, and that wasn’t to dole out approval, but to hash things out with Harper Row. 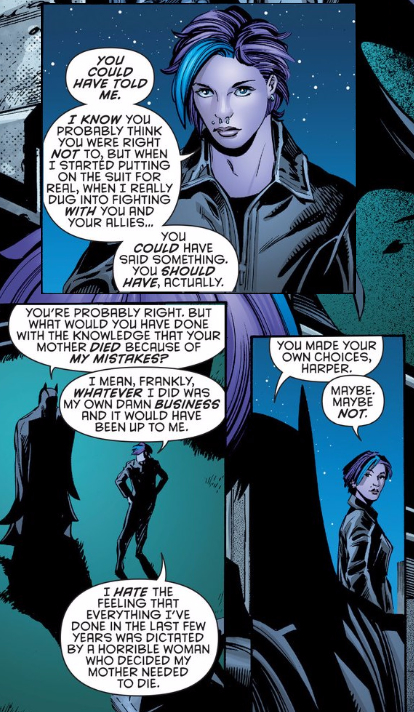 I’ve talked about it in past write-ups, but Batman’s role in Harper’s childhood and his decision to keep that information from her has easily been the most compelling element of Batman and Robin Eternal‘s flashbacks, so I appreciate Tynion not only addressing it in the series’ conclusion, but making it a driving motivation for Harper moving forwards. Harper’s decision to put Bluebird on the backburner is shocking, but understandable considering everything she’s discovered about her past. Moreover, what she says in the second panel is completely true: no matter what Batman thought she would do with the information, it’s still information he absolutely owed her.

All this adds up to paint a rather fascinating portrait of Batman — yeah, he’s a flawed man, but ultimately he’s still an excellent mentor/father figure. This is because he understands that his charges need guidance and space to find their own paths, not to be molded exactly in his image.

That’s something Mother simply can’t comprehend. I’ve mentioned it in the past, but Mother has such a narrow definition of strength that she can’t accept that anybody can be strong (and thus succeed) if they don’t follow her plan to the letter. Like any abusive parent, she wants to inflict trauma on her children in order to make them just like her — Mother’s just a bit more transparent about it. Michael’s right that it’s hard to be scared or intimidated by Mother’s talky, often Bond-villainish tactics, but if there’s any aspect of the character that’s truly chilling, it’s those real-world analogues.

With Tynion seemingly pitting those two parenting styles head-to-head, it would be easy to say that the Robins’ victory justifies Bruce’s methods over Mother’s, but that’s not exactly a fair fight — Batman has literally a dozen established characters on his side, while Mother has a few nameless brainwashed kids, the weak-willed and already-defected Azrael (who doesn’t even warrant a check-in in the epilogue apparently), and David Cain, whose sudden reappearance and even more sudden change of heart don’t make a ton of sense to me (oh how I long for the complexities of David and Cassandra’s pre-Infinite Crisis relationship). The true victory of Batman’s parenting style came before this series even began — his name is Dick Grayson.

By guiding Dick Grayson as Robin, Batman helped Dick escape the trauma and distrust that’s come to define his own life. Dick Grayson is Batman’s first and greatest triumph, and by overcoming an opponent Batman never could on his own, Dick may have just proven it once and for all. I’ll admit that Batman and Robin Eternal hasn’t always used the character effectively — putting Dick in a leadership role tends to dampen his more comedic, lighthearted side, and there were some creators who just flat-out wrote Dick poorly (I’m thinking of Dick’s forcing his way into Harper’s “mind-meld”) — but I’m genuinely, deeply impressed at how Tynion has taken this core aspect of Dick’s character and used it to resolve and solidify his series’ very central thesis.

I suppose it’s probably clear by now that, while it’s not without its faults, I enjoyed this issue quite a bit. To be fair, I am very much Batman and Robin Eternal‘s target audience. Actually, ever since he started throwing Pokemon references into Talon I’ve kinda thought of Tynion as a kindred spirit (in the way we all tend to do with artists we’ve never met); Tynion and I are the same age, seem to have grown up on much of the same media, and more than anything, we both seem to love Batman’s sidekicks more than almost any other group of comic characters.

I think Tynion’s work with these characters throughout this series holds together a lot better than Michael seems to (if it seems like Cassandra joins the team too easily in this issue, for example, it’s only because she already earned it in previous ones — she essentially arrived with a letter of recommendation from Batman himself, and later proved herself by trying to take down Mother’s operations single-handedly and nearly dying in the process) — straight-up, Tynion’s character work alone, especially with Cass, Steph, and Harper, is enough to make this issue a winner in my book.

Cassandra Cain, the girl whose “parents” raised her to be an instrument of death and nothing else, finally has a family. What a perfect beat to close her storyline on, especially considering that look or pure joy on Cass’s face — even though she can’t speak, it’s immediately apparent how unbelievably important this moment is to her. I got just the slightest bit choked up at this moment, I’m not gonna lie. For all its faults (and there were plenty), it’s moments like this that I’m gonna miss now that Batman and Robin Eternal is gone, and I can only hope to see more like it once Tynion (and his cast of Batman/Batwoman/Red Robin/Orphan/Spoiler/Clayface) takes over Detective Comics during “Rebirth.”