I’ll only do nudity if it’s important to the plot.

Drew: I can’t remember when I first heard this sentiment, but I can guess with 100% certainty the gender of the person who said it. Actresses use this line to justify the choice to disrobe, but the fact that they need any kind of criteria speaks to how often they might be asked to do nude scenes that aren’t important to the plot. More importantly, I’ve never heard a male actor express anything similar to this, because male nudity is so rare — they don’t need a rule for deciding which nude roles to take because they’ll likely never be offered one in the first place. Curiously, because male nudity is so rare, it necessarily has more impact, making it feel more “important” than even the most “essential” female nudity — I can count the number of times I’ve seen male nudity in films on one hand, but I’m certain I’m remembering all of them. This may be a tellingly long-winded way of saying I want to talk about Lou Pirlo’s wang, but damnit, I think it’s important.

Actually, part of what makes Lou’s nudity so surprising is that every scene leading up to it takes a much more…let’s say “traditional” approach to nudity.

Lou’s junk is kept coyly out-of-sight, obscured by his legs or shadow, while Tempest’s chest is unobstructed and clearly lit. This is exactly the approach to nudity we might expect of premium cable or R-rated films — female nudity is meant to be titillating in spite of how banal it is, while male nudity is too taboo even for stories that are explicitly trying to be shocking. It reiterates the flawed logic that female nudity is “more important” to the plot, suggesting that Tempest is somehow more vulnerable here, in spite of being in absolute control of the situation.

Let me be clear: I think writer Brian Azzarello and artist Eduardo Risso are intentionally misleading us here, using the familiar grammar of nudity to lull us into a false sense of security. The use of nudity subtly hints that Lou has all of the power here, even when he obviously shouldn’t. We see these traditional gender roles take shape and kind of forget that Tempest might be the predator here.

Indeed, it’s not until the next day, after Lou is imprisoned by Hiram, that we realize how we’ve been misled. Here’s how Risso shows us that Lou isn’t in control, after all:

That camera angle might have been enough to establish the power dynamic here, but there’s something visceral about seeing him completely nude. Risso could have easily kept Lou’s crotch in shadow — note the hard shadows on the ground around him — which only emphasizes how deliberate this choice is. Lou doesn’t just have no power; he has no humanity, relegated to the barn like an animal.

And maybe his sin was animalistic? It’s actually not entirely clear what offense Lou is being punished for here. Hiram’s moralizing about temptation certainly works with Lou’s affair with Tempest, but it might also be moral offense at being tempted by Joe’s business offer — it’s telling that Hiram’s final words to Lou are about giving him chances to leave. Then again, Lou’s “sin” might be having been turned into a werewolf, and Hiram is simply trying to protect the world from him.

Of course, exactly how (or, indeed, if) Lou became a werewolf is also ambiguous. Tempest bites him during their tryst, but another (?) monster wakes him by dripping drool into his open mouth. Then again, it may have nothing to do with bodily fluids — Patrick has suggested that it might be Holt’s liquor, and Lou’s conversation with Annabelle introduces the idea of witchcraft into the mix. Tempest could certainly be the “witch” Annabelle refers to, but so could Delia, who seems to overhear Lou’s transformation in this issue’s haunting final image. 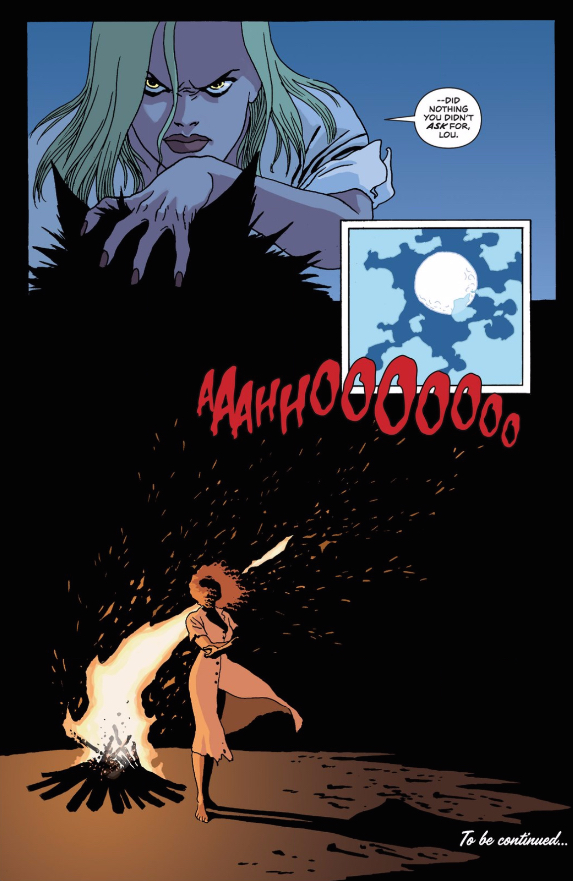 Patrick, I’m not sure if you can draw any deeper conclusions from those ambiguities at this point (though I welcome your guesses), but I’m hoping you can at least address some of those scenes I didn’t mention. What did you make of Lou’s visions of a werewolf in New York? Or the gangster showdown brewing back in town? Or maybe you just want to spend your wordcount on talking about dicks. Whatever floats your boat.

Patrick: Maybe I can speculate about the dicks under the suits worn by the gangsters — that covers just about all the bases you proposed, right?

Actually, I would like to start with the fashion of L’ago and his incompetent lackies. The town restaurant (where, remember, they might not totally know what “pasta” is) is completely packed with old fashioned Italian gangsters. They’re all done up in their cheap suits, most of them still swearing their jackets and hats, despite a prominently displayed coat rack

If power and vulnerability are being expressed through nudity in this issue — and I think Drew makes a compelling case that that’s exactly what’s happening — then we also have to notice when everyone insists on wearing the same thing. Yeah, yeah, yeah, some suits are brown, some are gray, some of pin stripes — these are all the exact same outfit.

That is, until L’ago enters the restaurant. He’s not dressed like anyone else. His knee-length black jacket obscures his red striped pants, and a white scarf draped over his shoulders neatly frames bowtie around his neck. Even his head gear sets him apart — not only his he the only character wearing glasses, but those glasses are a dark shade of sanguine pink, and he sports a tidy bowler instead of the ubiquitous fedora. L’ago gently storms in and takes control of the situation, but he really doesn’t need to say or do anything to accomplish that. Risso has crafted a character that is immediately recognizable as supernaturally in-control. 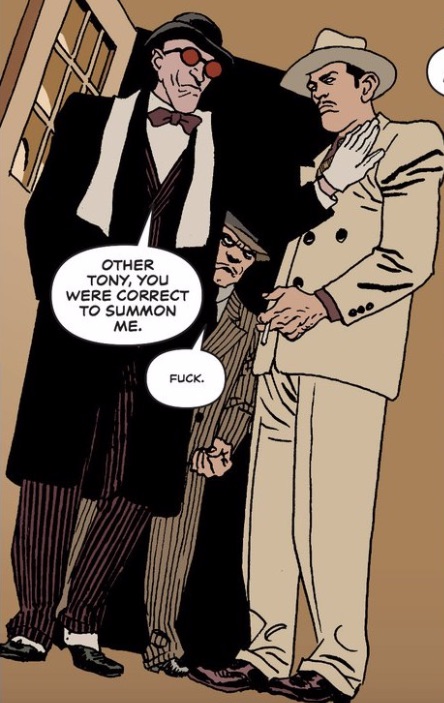 I think this actually speaks to something we were talking about in our discussion of the first issue: how people present themselves. Do they lead with their own identity or with the trappings of their station? L’ago seems to do both, projecting confidence because he is confident.

And sure! Let’s talk about werewolfery in New York! Risso and colorist Cristian Rossi tap into the same color scheme we’ve seen used before for flashbacks tinged with fantasy, but it’s sort of impossible to infer that that’s what we’re experiencing here. Lou’s voiceover recalls the immediate aftermath of his sister’s drowning, and his father’s subsequent drowning-in-booze. There’s a page break in the narration, but the sentiment that accompanies the appearance of the wolf in New York is:

“We shared a lot of laughs, and more than a drink or two. He was never shy about it — if he had a bottle, I’d get a nip as well. I’d like to think that was because he recognized a pain in me that needed to be dulled. Not one that he wanted to eat me alive.”

That’s obviously loaded language: “eat me alive” is rhetorical when talking about emotions, but literal when discussing backwoods wolfmen. So, what are we seeing here? Is Lou remembering himself as the werewolf he always was, mourning his sisters death? Is he foreshadowing a return to New York where he continues to monster-kill people in his grief? I believe what we’re seeing is wholly metaphorical: Lou learns to drink at an early age to cope with the pain of loss, but that same drinking makes him more likely to inflict future pain on himself and others. It’s cyclical — the cure is worse than the disease. That’s true of the so-called solution of sending in L’ago’s cronies from NYC, that’s true or turning into a werewolf to destroy your enemies, that may even be true of partnering up with Tempest.

But ultimately we’re left with the questions “if this is a metaphor then how did _____ happen?” Like Lou’s chains: who undid them? Wolf-Tempest? Annabelle’s ghost? Delia’s magic? Risso and Azzarello are viciously withholding, as if to suggest there is a very thin line between magic and metaphor to begin with. And hey, that’s exactly where I wanna be anyway.