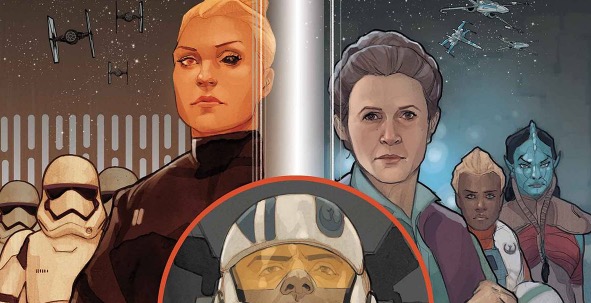 A resistance movement concerned with growing apathy among the people, dangerous and corrupt leadership in power propped up by a legislative body too power-hungry to care, journalists as heroes despite being considered untrustworthy by many — the many  parallels between the current political situation in the United States and the state of the galaxy are the driving forces of Charles Soule and Angel Unzueta’s Star Wars: Poe Dameron 17.

It’s unfortunate, then, that despite dealing with potentially fascinating subject matter, the issue itself is rather lifeless. Part of this can be attributed to the dialogue; characters work almost exclusively as exposition machines, with Poe and General Organa particularly lacking the wit that endeared us to them in the first place. But a great deal is lost in Unzueta’s art, which favors lifelike fidelity while sacrificing emotion.

I suspect Unzueta is working from film stills, if not tracing in some moments. His drawings of Poe are fairly convincing in isolation, but are also vacant behind the eyes and never really connect with other characters — like an actor filming a scene against green screen.

In many ways Unzueta’s in a no-win situation; take too many liberties in translating a beloved actor to the page and fans are liable to be upset. But in this instance a looser hand would be welcomed, as the results are like posing mannequins, and the issue is left cold.

Poe Dameron’s popularity is predicated almost entirely on the force of personality brought to the character by actor Oscar Isaac, and he’s sadly underserved here. Still, this issue is the first in a new arc, and introduces interesting concepts that have the potential to coalesce as the story moves forward.