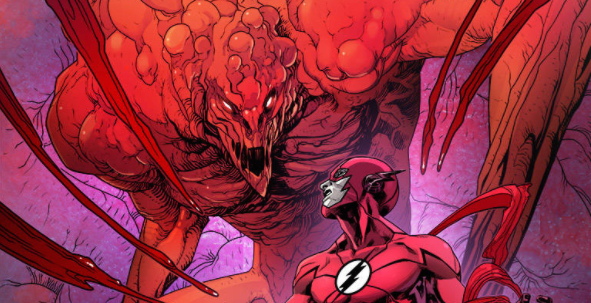 Ramsey the coroner, a.k.a. Bloodwork a.k.a. the villain of The Flash 30, never wants to be a victim again after a sheltered childhood hiding from hemophilia, and has only hurt or killed others in order to protect himself. That doesn’t absolve him, of course — the only real risk he’s facing is his own crimes being exposed, and he has zero remorse for any of his actions — but it does explain why he wants to hurt the Flash. Not only is Flash a personal threat to Bloodwork, but Ramsey also views him as a threat to all of Central City, something Barry, in his current self-pitying, Negative Speed Force addled state, would definitely agree with.

Bloodwork and Flash’s showdown is the highlight of the issue, largely thanks to artist Neil Googe and colorist Ivan Plascencia. Googe employs some truly dynamic and inventive layouts while telling Ramsey’s backstory, uses some fun effects to bring the Flash’s powers to life, and finds some legitimate horror in Ramsey’s Bloodwork abilities. 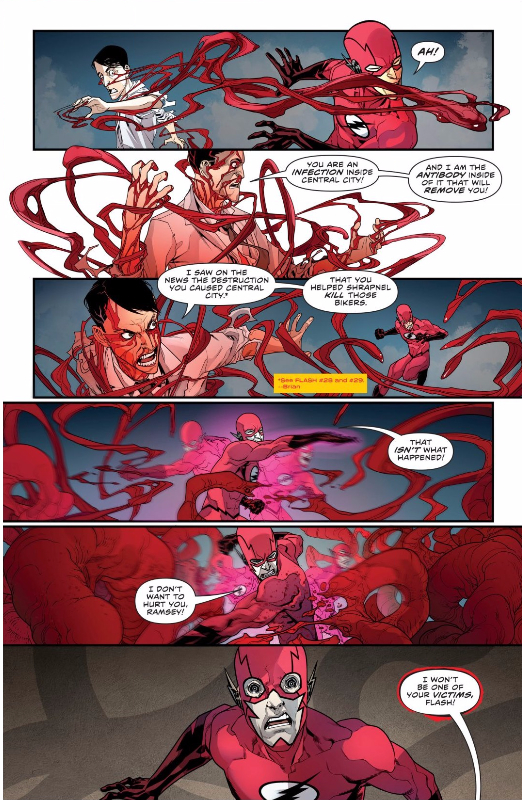 Outside of his truly inventive abilities and appearance, Bloodwork works best as a counter to Barry’s exponentially increasing self-pity, which has unfortunately been a bit of a black hole for The Flash over the past few months. Writer Joshua Williamson devotes the first half of this issue to Barry throwing a tantrum at CCPD and once again having to be talked down, and both actions are ones readers have seen play out numerous times in recent memory, to the point of exhaustion. Williamson is clearly playing a long game with this aspect of the plot, but I’m getting a bit too sick of this game to want to see it through to completion, no matter how cool some of Williamson’s ideas are in the interim.