Daredevil is a punching bag. I know all superheroes suffer — conflict is the engine of story, and masked dudes with superpowers have to really be put through the ringer for a desensitized audience to feel anything. But Matt Murdock is a special case: his default state seems to be “just got beat up.” I mean, look at the cover to this issue. No one’s going to ask “oh no, is Matt gonna be okay?” Yeah, sure — he’ll be fine. He always bleeds from the face when he’s working on a plan. So part of what makes Daredevil 601 feel so unsettling is how smoothly everything goes for the Mayor Without Fear.

Not that the issue starts that way. Daredevil is in the back of a paddywagon, handcuffed with some souped-up bracelets designed to restrain people with powers. Writer Charles Soule and artist Mike Henderson even walk us through the thought process of how he might be able to break them, detailing the inside of the locking mechanism through radar sense. The best part is that Matt tries to break them apart, and just straight fails. To this point, the team is setting up the expectation of failure. Matt’s going to try as hard as he can, and he’s still going to get the crap knocked out of him.

OR IS HE? The second the door busts open to reveal two Hand ninjas instead of NYPD officers, the issue starts on a totally different trajectory. Matt’s voiceover bows out with a graceful “Ah” and then pure action kicks in. 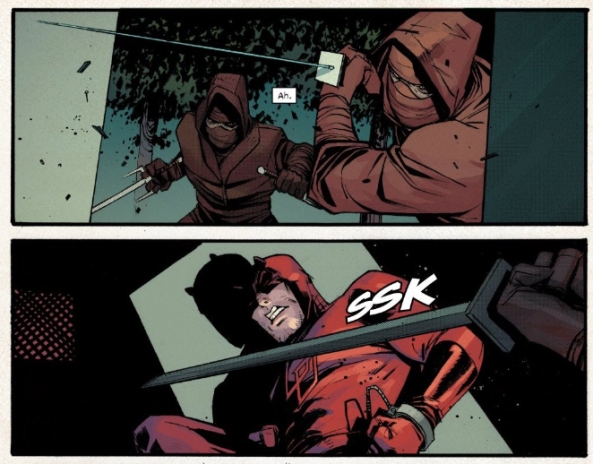 This kicks off five wordless pages, wherein Daredevil’s goals are clear, obvious and attainable. He can fight two undead ninjas and trick one of them into cutting him free — we don’t need the narration to explain how any of that is happening. Both Matt and Henderson appear to be in a flow state during these pages, gracefully succeeding.

And “gracefully succeeding” is also how I’d describe Murdock’s first couple minutes are Mayor of New York. He assertively claims control of the office, protects the NYPD, fires Wesley (yes!) and sets his superhero friends free. Surely, all of this will come back to bite him in the ass eventually, but in the moment, it’s all very decisive and empowering. The fact that Soule ditches the VO boxes in the later half of the issue is informative about how he views them: as a sign of Matt’s desperation and frustration. When it’s all going well, he doesn’t need to talk to himself. After all, he’s windbagging at the people in the room, so there aren’t exactly words left over to spend on himself.

One comment on “Failure Defeated by Pure Action in Daredevil 601”