There’s a joke amongst fans that if a team exists in the Marvel Universe, Wolverine has been a part of it. This is an exaggeration — it’d be funny to see him joining up with the Champions or Young Avengers, but it hasn’t happened yet — but only slightly. Logan’s prolific stature in the Marvel Universe is what allows for an event like Hunt for Wolverine, which rounds up as many characters with connections to Logan as possible, no matter how tangential, from every corner of Marvel’s vast universe. It’s a bit of a bait-and-switch, as bringing in all these characters has so far (in the two issues of Hunt for Wolverine thus released) led to stories that are rather light on Wolverine himself. Tom Taylor and R.B. Silva lean into that idea in Hunt for Wolverine: Adamantium Agenda 1, pulling a bait-and-switch on their cast as well as their readers. Logan’s former New Avengers teammates think they’re rescuing Wolverine(‘s genetic code), but it turns out they’ve stumbled into a very different, much more personal scenario. END_OF_DOCUMENT_TOKEN_TO_BE_REPLACED 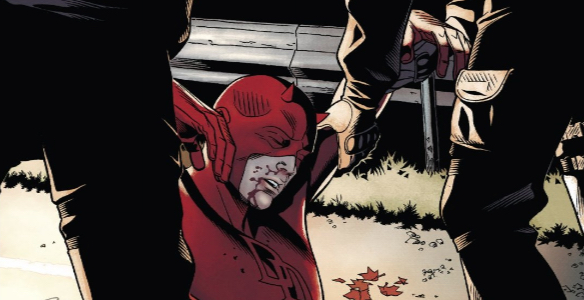 Daredevil is a punching bag. I know all superheroes suffer — conflict is the engine of story, and masked dudes with superpowers have to really be put through the ringer for a desensitized audience to feel anything. But Matt Murdock is a special case: his default state seems to be “just got beat up.” I mean, look at the cover to this issue. No one’s going to ask “oh no, is Matt gonna be okay?” Yeah, sure — he’ll be fine. He always bleeds from the face when he’s working on a plan. So part of what makes Daredevil 601 feel so unsettling is how smoothly everything goes for the Mayor Without Fear. END_OF_DOCUMENT_TOKEN_TO_BE_REPLACED

Patrick: Where does power come from? I’ve been seriously grappling with this one since Trump was elected to the White House, but this question obviously extends waaaay beyond that fucking monster. Does power ultimately come from money? From social connections? From one’s willingness to sacrifice their friendships? From violence? From non-violence? As the battle between Wilson Fisk and Daredevil reaches a fever pitch, questions of where either of them gets their power are posed right alongside the question of where Daredevil 600 gets its power. This is a six-hundredth issue, after all — so what makes this one special? END_OF_DOCUMENT_TOKEN_TO_BE_REPLACED

by Taylor Anderson and Ryan Desaulniers

Taylor: When you think of the job comic book writers are tasked with, it’s damn near impossible to not stand in awe at what they accomplish. When writing for monthlies, authors not only have to come up with an engaging story, but something that stands out as unique. This is no easy task. Monthly comics have been around for the better part of a century, and many of the heroes who have titles today have participated in literally hundreds of story arcs. With that in mind, it’s impressive to consider the career of a writer as prolific as Brian Michael Bendis. Arguably the most recognizable name in comic book writing today, Bendis has written countless stories in his career, so at some point it becomes reasonable to question if he’ll ever cease to come up with new, entertaining stories. While it would be hyperbole to say Defenders 1 signals the beginning of the end for Bendis’s creativity, it’s hard to argue the lack of originality and inspiration in this first issue. END_OF_DOCUMENT_TOKEN_TO_BE_REPLACED

Spencer: A defining trait of Hawkeye is that they’re a bit of a “hot mess.” For all their skill as archers, both Clint Barton and Kate Bishop tend to be disheveled, disorganized, and often immature in pretty much all other aspects of their lives. This likewise applies to Kate’s new job as an L.A. P.I., a job she’s thus far succeeded at largely through luck and improvisation rather than skill. Thankfully for her, though, it turns out that this may actually make the job a perfect fit for her. Who better to teach that lesson than fellow P.I., and the “Queen of Hot Messes” herself, Jessica Jones? END_OF_DOCUMENT_TOKEN_TO_BE_REPLACED

Spencer: Befitting her job as a private investigator, mystery is a vital element of the Jessica Jones mythos. It’s probably why my favorite episode of the Netflix series is the one that put the ongoing Kilgrave story on hold to solve an unrelated case of the week, and it’s also why the first issue of the new Jessica Jones relaunch works so well — Brian Michael Bendis and Michael Gaydos don’t just build a mystery around Jessica’s newest case, they turn her very life into a mystery that the audience, and perhaps even Jessica herself, need to solve. END_OF_DOCUMENT_TOKEN_TO_BE_REPLACED

Spencer: The beating heart at the center of David Walker, Sanford Greene, and Lee Loughridge’s Power Man and Iron Fist is the friendship between its titular heroes. It should’ve been obvious, then, that the primary theme of this series would be “the power of friendship,” but that’s actually an idea that didn’t come fully into focus until this month’s issue four, the finale of the series’ first storyline. Even more interestingly, the true strength of friendship (and its advantages over other kinds of power) isn’t driven home by Luke and Danny, but by the villains, Jennie Royce and Black Mariah. In fact, it’s their friendship that makes Danny and especially Luke reprioritize their own friendship. END_OF_DOCUMENT_TOKEN_TO_BE_REPLACED

Last week, Marvel Studios announced that it would be producing four original, live-action series for Netflix — Daredevil, Jessica Jones, Luke Cage, Iron Fist — and a Defenders mini-series that would theoretically tie them all together. Marvel Studios proved they were capable of conquering the well-established medium of feature-length films, and Agents of S.H.IE.L.D. is already a monster hit for ABC, can they accomplish the same in the untested waters of the Netflix Originals market? What’s in it for them? What’s in it for us? Hell, do  you even have room in your heart to love FIVE NEW SERIES? Welcome to the Chat Cave.
END_OF_DOCUMENT_TOKEN_TO_BE_REPLACED

Ethan: Stories have to follow a lot of formulas — rising action, tension, struggle, resolution. Comics are often even more constrained — extraordinary people, powers, and villains combine to make extraordinarily predictable outcomes. Familiarity sells. But while you could say a lot of horrible things about Deadpool — and they’d all be true — if there’s one thing that he is NOT, it’s conventional. Maybe it’s because his superpower has more to do with the basic act of survival rather than leaping a building in a single bound; maybe it’s because he’s just a bastard of a guy who lucked out with the world’s most impressive healing factor. Maybe it’s because he’s Canadian. I dunno. Either way, he’s up to his eyeballs in demonic intrigue right now, so perhaps the standard operating procedures wouldn’t be the best fit anyway. As he continues his contract with Vetis, hunting and killing superpowered humans who sold their souls for their abilities, writers Brian Posehn and Gerry Duggan continue to entertain while Wade Wilson continues to backstab his way to freedom.