I played a lot of Magic: The Gathering in middle school. I woke up thinking about it, I fell asleep thinking about it, I viewed everything through the lens of Magic. Friends were people I played Magic with, and school was just something I had to do before I could play again. I was in love: for almost three years, that game completed me. In 1995, my friends and I went to Gen Con in Chicago, a massive hobby-store convention, which mostly meant Magic and Warhammer. That’s when I realized just how miniscule my obsession actually was. I wasn’t a Magic expert, I was a kid with a hobby in a convention center full of adults who had been living this nerdiness since before I was even born. Magic opened me up to a love of gaming and fantasy, but for these folks, it was the culmination of their lifestyle. Issue 3 of Donny Cates and Ryan Stegman’s Venom gives Eddie Brock his very own Gen Con ’95 moment as he comes face to face with the god of the symbiotes.

Eddie loves his symbiote about as much as I loved Magic back in the mid-90s. Ryan made the argument last month that Eddie’s suffering from addiction, and that’s probably correct both for 13-year-old Patrick and our hero. Addiction notwithstanding, the symbiote gives Eddie strength, meaning and purpose. In fact, the issue opens with Eddie overcoming the symbiotes’ more violent impulses and spares Spider-Man. Artist Ryan Stegman sells the intensity of brawl by soaking it in blood and crimson rain and a liberal application of blurry motion lines. 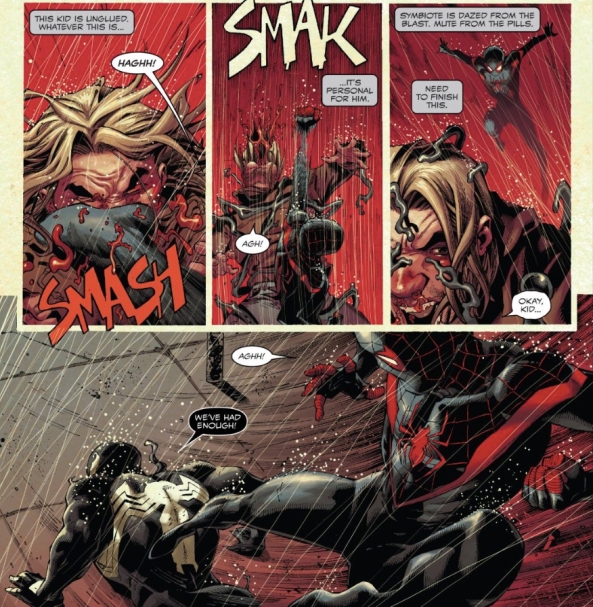 That geyser of blood gushing out of Eddie’s nose in panel two is so surprising! That kind of gore doubles down on Venom‘s ultra-violent aesthetic, a very Mortal Kombat-esque set of visual priorities. (Again, I will refer you to the mid-90s…) But that’s all where Eddie Brock, and the whole concept of Venom, is most comfortable. The rest of the issue is flooded with muscular black figures against red backgrounds. It’s so fucking Venom.

You’d think Eddie would be in heaven right? Well… that’s when he discovers there’s a limit to his love. By the time Knull reveals himself, a giant skeletal-inky-monster-arm is snatching helicopters out of the air. Colorist Frank Martin replaces the white and beige gutters with a solid red, matching Knull’s speech balloons. Whatever it was about Venom that made Eddie feel safe is now operating on a level that’s so intense that it’s alienating to him. The final page is a splash flashback to “Billions of years ago…” If that’s not a sign that Eddie’s in over his head, I don’t know what is.