Ryan: We all know Frank Castle’s deal: a veteran whose family was unceremoniously gunned down takes to arms in a one-man war against crime or for whatever cause he sees fit to fight for. In the numerous Punisher stories since his inception in 1974, and particularly since the seminal Garth Ennis PunisherMAX run with the character, writers have been trying to find ways to connect a man who commits so many reprehensible acts of cruelty and murder with an audience. Castle sports the label of “anti-hero” to an audience that consumes his stories in various mediums, but writers keep pushing to see how far his character can go and still elicit sympathy from the readers, using different tactics to do so. The Punisher 1 by Matt Rosenberg and Szymon Kudranski, however, leaves all of these devices behind, giving us a Frank Castle title that is bereft of almost any means of identifying and excusing Frank’s actions, save for the fact that Castle fights against even more villainous figures.

In the aftermath of Secret Empire, wherein the Punisher worked as a heavy for the Hydra Steve Rogers, Frank deals with the betrayal he feels at the hand of who should be the stalwart symbol of righteousness. Or, at least, that’s what the intro copy says at the beginning of this issue. Inside the comic, there is no such opportunity of validation of actions for or from Castle. Indeed, this, to me, is the most gripping aspect of this issue: there are no monologues, asides to the audience, side-kicks who give us a look into Frank’s pathos, or any of the other tricks that writers use to let us in on a character. Frank stalks the pages of this first issue like a boogeyman, the force moving behind the pages of villains’ machinations, more like the shark in Jaws than any kind of hero I normally see in comics. Drew made a similar observation for the 2016 Becky Cloonan Punisher 1, but Rosenberg takes this even further.

Castle utters three lines throughout, and is seen visually in only an eighth of the pages, and only three times in full (well, two and a half if you count the reflection in a motorcycle helmet visor). When the Kudranski finally reveals Frank, it’s like this: 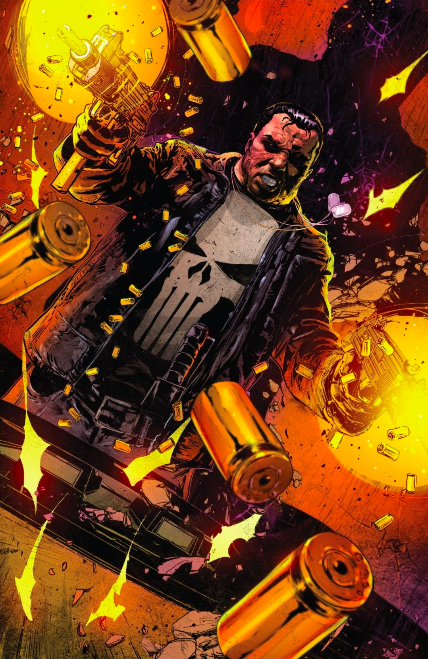 This is not Frank Castle, now that I think about it; this is only the Punisher: a tempest of justified rage and bullets. In fact, to even see the man himself, the reader’s eyes must first go past multiple layers of shell castings raining down in the foreground, then to the machine pistols spending them, then to the layers of leather and Kevlar, until we finally see Frank’s head, which itself contains hardly any humanity. The man sports an ugly, hard grimace, deep lines in his face, and shadows concealing his eyes, “lifeless eyes, black eyes, like a doll’s eyes” (Jaws, duh). Behind him, the Punisher’s shadow looms larger than the man himself, much in the same way that Frank’s presence and reputation looms throughout the title just as much — if not more — than his actions. Credit goes to artist Kudranski for a splash page which says as much thematically as it does for character.

But the audience could not engage with the title’s eponymous character if we did not care about whether he wins or loses. While the Frank we see here calls for about as much empathy from the readers as his Ka-Bar knife does, we’re still sympathetic to him because he crusades against such deplorable big-bads. Much of the issue follows the plans of Baron Zemo, the Mandarin, and Mr. Agger of Roxxon Corporation: three of the most notorious characters in the Marvel Universe. Their scheme to make Bagalia a recognized country in the United Nations also carries a threat at a global level, considering the large stockpiles of futuristic, hyper-lethal energy weapons they’re housing and the dangerous ideals the three villains all espouse. So, while we might not agree with the morality of the tactics and choices Frank makes, we may excuse them in the context of the forces he endeavors to stop.

Patrick, for every amazing Punisher story, I find there are many that aren’t worth my time, but this run is fixing to become one of the former. What do you think of the visual storytelling here, especially in regards to the panel choices and coloring? Do you think the art excuses some of the clunky exposition in the script? And do you care about what happens to Frank now that he will be hunted, and not the hunter, despite how implacable he is in this issue?

Patrick: Let me tell you what I do like about the slight re-orientation for the Punisher’s mission. Frank finally appears to have adjusted his sites toward the people actually causing the most harm in the world. I mean, don’t get me wrong: it’s important to have solutions for drugs and gangs and organized crime, but in targeting the most politically powerful evil people in the Marvel Universe, Frank’s finally taking on crime at the fountainhead. Dario Agger, Baron Zemo and the Mandarin represent a mega corporation, an oligarcy, and a goddam terrorist nation state (respectively). They’re existential threats to the rest of humanity that cannot be stopped by other means.

So, I guess it’s less about really empathizing with Frank Castle and more about hating this guy.

Mandarin! That’s not diplomacy or negotiations… or really anything other than torture and murder… It’s fascinating to see how Rosenberg’s story, which feels an awful lot like it’s the set-up for some kind of geopolitical thriller, is undercut by the old-school-Bond-villain-esque setting. Are we witnessing a fantastic evil? Or a real-world evil? And what’s the difference?

Rosenberg and Kudranski are making the argument that the difference is mostly aesthetic. Mandarin even gives Zemo shit for insisting on his stupid purple mask, which Kudranski draws extra-loose fitting for maximum ugliness. This is actually one of my favorite scenes in the whole issue: these three global super villains arguing about votes, strategy, responsibility, appearance — then then being interrupted by a phone call.

Punisher may be surfing a bullet tsunami, but these three are tangled in some boardroom bullshit. Kudranksi usually trades in almost impressionistic depictions of action, just giving the reader the goriest bits of what’s happening from moment-to-moment, but he decompressing the storytelling here to such a remarkable degree that Agger saying “Baron. A Word?” is the most “action packed” beat on the page. That’s what the evil dudes look like when we freeze them in decompressed storytelling mode. What’s Frank look like?

Ah, good: still horrible. Kudranksi’s insistence on the single perspective and the like half-a-second between panels is admirable, even as it paints Frank in the ugliest possible light. I mean, he murders two dudes simultaneously in the second panel, takes someone hostage, and rules the hallway over a pile of automatic weapons. He’s not a good guy. Kudranksi guides the readers eye to those micro-beats of violence with orange panel borders, and it creates an odd image on the page. The line of orange panels traces down and to the left, suggesting a sort of backwards motion. Notice that none of the panels on the right side of the page have this special boarder. That’s because the right side of the page is progress. That’s the part of the paper you have to physically interact with in order to move the story forward.

So even if Frank’s updated his targets to be more in-line with what I might consider justice, his methods are still decidedly regressive. The issue ends with the Punisher switching from One Man Army to Assassin. He’s taken the metaphor of starting a war and made it literal.

2 comments on “The Punisher 1: Discussion”