Patrick: What makes an audience try to see heroism in their anti-heroes? We all try to do it. No matter what Don Draper does, no matter who he hurts, we want to believe that there is some kind of moral or narrative victory in him achieving his goals. Is that just how we relate to protagonists? Or is the protagonists’ own buried desire to be good, to be morally right, more compelling than the villainous actions we see them undertake? Donny Cates and Dylan Burnett’s Cosmic Ghost Rider 5 sees the titular character making a heroic stand at the end of a failed timeline, but ultimately confirms what we should have known all along: Frank Castle ain’t no hero. END_OF_DOCUMENT_TOKEN_TO_BE_REPLACED

The entirety of Donny Cates and Dylan Burnett’s Cosmic Ghost Rider has been about enthusiastically mashing up disparate elements of the Marvel Universe to create singularly compelling ideas. Our hero, if we wanna call him that, is a mix between Punisher, Ghost Rider and Silver Surfer. He spent the whole last issue battling teams of What-If cross-over mash-up characters until grown-up Punisher-Thanos came back in time from the future to rescue him. But the fourth issue finds the creative team juxtaposing disparate qualities that are far more elemental and aesthetic. Instead of a Juggernaut that is also a Duck, Cosmic Ghost Rider 4 give us a pastoral fantasy that is also a post apocalyptic nightmare. END_OF_DOCUMENT_TOKEN_TO_BE_REPLACED

The very concept of “Cosmic Ghost Rider” is a great example of Writer Donny Cates  using disparate ideas from all around the Marvel universe as the building blocks for something wholly new and exciting. In my write-up of issue #1, I called it “Mythological Omnivorism”, a turn of phrase that I like, but which feels a least a little dishonest. Cates and artist Dylan Burnett weren’t consuming this mythology so much as they were shuffling, repackaging, and repurposing it. Issue three is where the consumption begins – and all of those jumbled-up building blocks are devoured to sate the gluttonous reader’s appetite. END_OF_DOCUMENT_TOKEN_TO_BE_REPLACED

Ryan: We all know Frank Castle’s deal: a veteran whose family was unceremoniously gunned down takes to arms in a one-man war against crime or for whatever cause he sees fit to fight for. In the numerous Punisher stories since his inception in 1974, and particularly since the seminal Garth Ennis PunisherMAX run with the character, writers have been trying to find ways to connect a man who commits so many reprehensible acts of cruelty and murder with an audience. Castle sports the label of “anti-hero” to an audience that consumes his stories in various mediums, but writers keep pushing to see how far his character can go and still elicit sympathy from the readers, using different tactics to do so. The Punisher 1 by Matt Rosenberg and Szymon Kudranski, however, leaves all of these devices behind, giving us a Frank Castle title that is bereft of almost any means of identifying and excusing Frank’s actions, save for the fact that Castle fights against even more villainous figures. END_OF_DOCUMENT_TOKEN_TO_BE_REPLACED

I aways struggle to identify with the Punisher. The straight line from Army vet to man suffering from personal loss and PTSD to gun wielding maniac only ever plays as tragedy for me. Like… where’s the fantasy? Where’s the escapism? Writer Donny Cates and artist Dylan Burnett address this dissonance by taking the two most sadistic parts of Frank Castle’s origin — military service and a mind set on vengeance — and mythically amplifying them both in uniquely Marvel ways. The result is, and I can’t believe I’m saying this about a Frank Castle story, tons of fun. END_OF_DOCUMENT_TOKEN_TO_BE_REPLACED

Garth Ennis and Goran Parlov return to Vietnam to reveal another layer of complexity of one of our nation’s first questionable international conflicts. The in-story journalist Archie Goodwin explains that — unsurprisingly — there were two sides to the story when it comes to The Vietnam War. In earlier Punisher works, Ennis focused solely on Frank Castle and the United States armed forces. In Punisher: The Platoon he presents us with sniper Ly, who is one of our windows  for the Vietnamese side of things. END_OF_DOCUMENT_TOKEN_TO_BE_REPLACED 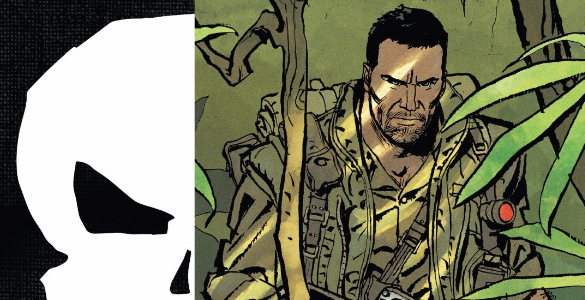 The Vietnam War is often pointed to as a clear turning point in modern American History. The confluence of improvements in broadcast television and questionable international interference led to disastrous results – taking millions of lives and leaving a devastating impact on those who walked away with their lives. Among those survivors – in the fictional Marvel world – was Frank Castle. END_OF_DOCUMENT_TOKEN_TO_BE_REPLACED

By Ryan Mogge and Drew Baumgartner

Ryan: Every event in your memory left some sort of mark. When it comes to trauma, those marks are more like deep grooves. No matter how much you heal, or how much better off you are, you are changed by what has happened to you. In the wake of a rebellion against a group of fascists bent on world domination with the face of the most trusted man alive, you certainly can’t expect to move forward without being changed. In Secret Empire: Omega 1, Nick Spencer and Andrea Sorrentino offer a mixture of back-to-normal plot points and artful rumination that operate quite differently but still offer the same themes of trauma and the scars left behind. END_OF_DOCUMENT_TOKEN_TO_BE_REPLACED

by Patrick Ehlers and Ryan Mogge

Patrick: The Secret Empire epic drives on an engine powered by dramatic irony. From the second Steve’s first “Hail Hydra” was uttered, the audience knew more about the threat the Marvel Universe faced better than any of its inhabitants. It is serendipitous (in the worst possible way) that the current political climate in the United States has made readers hyper-aware of this irony, as we’re able to draw obvious parallels between the rise of Hydra and the rise of white nationalism. We don’t need to parse out the rhetorical devices Steve uses to justify his abuses of power — we see them demonstrated by our president every day. Issue 4 doubles down on the practice of illustrating dramatic irony, giving the audience far more information than any of the characters are ever afforded. The result is an unsettling exercise in moral relativism. END_OF_DOCUMENT_TOKEN_TO_BE_REPLACED

Drew: That Secret Empire is about big ideas goes without saying. As with any tentpole summer event, it promises to change the Marvel universe as we know it (at least temporarily), but the bigger story is the way the event (and the stories leading to it) have reflected the real-world political climate, often in uncanny — and uncomfortable — ways. But issue 3 reveals that, underneath it all, writer Nick Spencer may have been building to an even bigger (albeit, perhaps less controversial) question about the very nature of the superhero genre in the present day: does it still have room for moral absolutes? END_OF_DOCUMENT_TOKEN_TO_BE_REPLACED