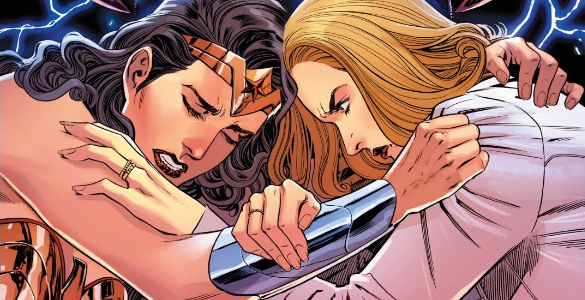 In a classical Greek tragedy, no matter whether they achieve their goals, the protagonists of a story end up worse off than they started. In Wonder Woman 24, everyone is at once successful and miserable. Greg Rucka focus on three women living in pain even after reaching their objectives.

After seeing her mother and being only a step away from Themyscria, Diana is distraught when she returns. Rucka indicates that Diana is not her usual self in the way that she carelessly leaves Cheetah behind. It wouldn’t necessarily be careless if a regular person did it, but Wonder Woman has set standards of empathy and kindness that even she cannot always live up to. When Etta calls her out, it only takes a moment before Diana is ready to take action. Even in her guilt, she is committed to making things right. END_OF_DOCUMENT_TOKEN_TO_BE_REPLACED

Mark: Wonder Woman 21 is a showcase for the whole of Wonder Woman — from her physical strength to her compassion for those in need — that continues Greg Rucka, Liam Sharp, and company’s holistic rehabilitation of the character. And after Diana has taken the backseat in the past few even-numbered issues, it feels appropriate to have her front-and-center as the narrative loop begins to close. END_OF_DOCUMENT_TOKEN_TO_BE_REPLACED

Mark: One of the most compelling features of Greg Rucka’s Wonder Woman is its willingness to incorporate into real issues facing society, as we come to terms with our systematically poor treatment of women and grapple with how to resolve it. Like a proclamation of intent, the earliest arc in the book, “The Lies,” features Cheetah dealing with the devastation caused by abuse, rape, and victim-blaming. These are issues deeply entrenched in American culture made palatable to general audiences because the villains manifest themselves as mystical beasts and gods. But not all of the methods Rucka and his collaborators use to convey their message (for lack of a better term) are quite so foregrounded. For instance, every position of authority in Wonder Woman so far is held by a woman. This is a story about women, featuring women, that is in no way lacking because its pages aren’t filled with more dudes. END_OF_DOCUMENT_TOKEN_TO_BE_REPLACED