Spencer: Just last week I dug a bit into some of the weaknesses of Hal Jordan and the Green Lantern Corps’ space-cop, “lawful good” approach to justice, and now, here comes Wonder Woman 58 to provide a hero on the exact opposite side of Hal’s coin, one who follows her own justice rather than any one set of laws. I’m definitely more on Diana’s side than Hal’s here, to be sure, but G. Willow Wilson and Cary Nord don’t let their hero (and her worldview) go unexamined either. This issue seems prepared to explore numerous approaches to justice, and it makes the full scope of its grand ambitions clear when it asks the hardest question of all: “Is there any such thing as a just war?” END_OF_DOCUMENT_TOKEN_TO_BE_REPLACED 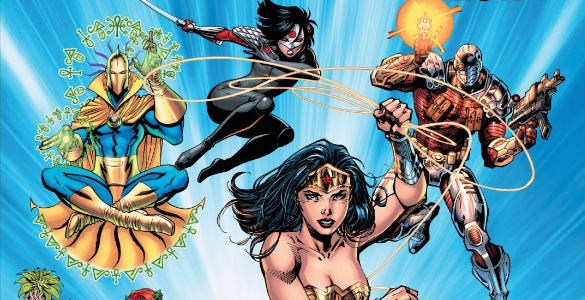 END_OF_DOCUMENT_TOKEN_TO_BE_REPLACED

It’s heartening that after Greg Rucka concluded his run on Wonder Woman — a run that found its greatest success when focusing on Diana of Themyscira as a reflection of real life issues — Shea Fontana doesn’t shy away from keeping the book political during these troubling times in America. In Wonder Woman 29, Diana lingers by the US Capitol Building as she considers the purpose of her powers. She wants to do good, to help others and ease their burden, but as she stands on the dome of the Capitol, she realizes there are no higher authorities she can appeal to for assistance; the power lies with her to affect change. END_OF_DOCUMENT_TOKEN_TO_BE_REPLACED

In a classical Greek tragedy, no matter whether they achieve their goals, the protagonists of a story end up worse off than they started. In Wonder Woman 24, everyone is at once successful and miserable. Greg Rucka focus on three women living in pain even after reaching their objectives.

After seeing her mother and being only a step away from Themyscria, Diana is distraught when she returns. Rucka indicates that Diana is not her usual self in the way that she carelessly leaves Cheetah behind. It wouldn’t necessarily be careless if a regular person did it, but Wonder Woman has set standards of empathy and kindness that even she cannot always live up to. When Etta calls her out, it only takes a moment before Diana is ready to take action. Even in her guilt, she is committed to making things right. END_OF_DOCUMENT_TOKEN_TO_BE_REPLACED

Mark: One of the most compelling features of Greg Rucka’s Wonder Woman is its willingness to incorporate into real issues facing society, as we come to terms with our systematically poor treatment of women and grapple with how to resolve it. Like a proclamation of intent, the earliest arc in the book, “The Lies,” features Cheetah dealing with the devastation caused by abuse, rape, and victim-blaming. These are issues deeply entrenched in American culture made palatable to general audiences because the villains manifest themselves as mystical beasts and gods. But not all of the methods Rucka and his collaborators use to convey their message (for lack of a better term) are quite so foregrounded. For instance, every position of authority in Wonder Woman so far is held by a woman. This is a story about women, featuring women, that is in no way lacking because its pages aren’t filled with more dudes. END_OF_DOCUMENT_TOKEN_TO_BE_REPLACED

You know you shouldn’t judge a book by its cover, but that doesn’t mean you can’t judge the cover on its own merit. Some covers are so excellent that they pack all the drama, excitement and emotion of the whole issue into one succinct image. Sometimes they end up being their own surreal experience. And other times, we’re just exciting to see our favorite heroes kicking ass one more time. These are our top 10 covers of 2016. END_OF_DOCUMENT_TOKEN_TO_BE_REPLACED

Spencer: I was a little know-it-all as a kid. One of my earliest memories is interrupting a lecturer on a field trip to a planetarium to correct him about outer space trivia; “well, actually” might as well have been my catchphrase in elementary school. Even as an adult with decidedly screwed-up self esteem, I still occasionally find myself falling prey to the snare of overconfidence; in many ways, I think it’s just human nature. Supreme confidence has always been presented as one of Midnighter’s most charming attributes, but after suffering yet another loss, Midnighter 10 starts to explore whether that confidence is an asset or a hindrance, and one of the most effective ways it does so is by comparing it to the overconfidence of the rest of the cast. END_OF_DOCUMENT_TOKEN_TO_BE_REPLACED

Spencer: Who is Midnighter? It’s clearly a question writer Steve Orlando wants to keep on his readers’ minds, as most issues of Midnighter feature its titular character explaining his life story to someone (this month, his documentarist Robert). Any conclusions we can draw about who Midnighter really is deep inside from that information, though, are complicated to say the least. Who is Midnighter? He’s a contradiction. END_OF_DOCUMENT_TOKEN_TO_BE_REPLACED