The X-Men represent a particularly confusing corner of the Marvel Universe. It would be hard enough to keep the ever-growing list of characters straight even without all of the time travel, shape-shifting, and body-doubling shenanigans. I suppose mileage varies depending on how familiar one is with all of those characters and timelines, but for me, the most readable X-Men stories tend to strip things down: a few characters, a specific problem, and clearly defined parameters that limit the solutions. Unfortunately, Multiple Man 1 doesn’t do a great job of laying out any of those components. END_OF_DOCUMENT_TOKEN_TO_BE_REPLACED 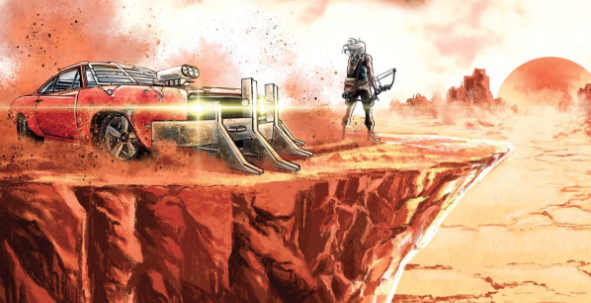 The conventional wisdom in improv is that transaction scenes — like those between a customer and a storekeeper — are inherently uninteresting. The relationship between the two characters is impersonal and perfunctory, and the transaction is void of any tension. Any of those elements can be changed to rescue a transaction scene, but beginners are encouraged to avoid those setups altogether in favor of those that have relationships and tension built in to the premise. (At least, this is my understanding, though I’m prepared to have our improv contingent correct me in the comments.) Interrogation scenes definitely have that tension built in, as one person wants information the other is reluctant to share, but the relationships are often still impersonal. Moreover, they’re scenes we’ve seen a million times, whether they’re taking place in a police station or as Batman dangles a crook from some rooftop. Which is to say, the tension isn’t quite enough to carry those scenes. Like a transaction scene, an interrogation can be rescued if complications are added in the right places. Unfortunately, those complications are largely absent from Old Man Hawkeye 2, leaving two of its its three interrogations feeling pretty limp. END_OF_DOCUMENT_TOKEN_TO_BE_REPLACED

There are plenty of valid critiques of individual prequels, but I’ll never understand the argument that prequels are robbed of stakes because we know who survives the story. This ties into my wariness of spoiler concerns that privilege plot over all other aspects of consuming a story, but with the added twist of fetishizing death as the only stakes a story could possibly have. It falls apart under even the slightest scrutiny — the protagonist’s survival can be assumed for the vast majority of stories, and I reject the notion that this fact inherently makes those stories inferior. We know Vito must survive the flashback story in The Godfather Part II, but it is also regarded as one of the greatest movies of all time — held in higher esteem than virtually all movies where the protagonist might maybe die in the third act. Not all stories are life-and-death stories, and not all life-and-death stories require us to actually believe that the character might die. Such is the case with Old Man Hawkeye, which tells the story of Clint Barton before he went on that fateful road trip in Old Man Logan. (So, you know, heads up about spoilers for that series after the jump.)  END_OF_DOCUMENT_TOKEN_TO_BE_REPLACED