Lockjaw is a pet, Black Bolt’s (and sometimes Ms. Marvel’s) faithful companion, so often a sidekick in their adventures. Daniel Kibblesmith and Carlos Villa’s Lockjaw miniseries has provided a chance for the teleporting canine to step into the spotlight and become the hero of his own story, a fact that takes center stage in the series finale. END_OF_DOCUMENT_TOKEN_TO_BE_REPLACED 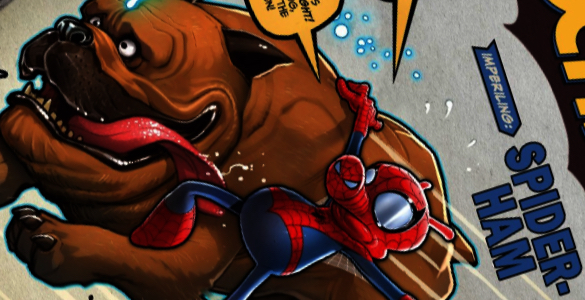 There are no rules inherent to a cartoon world. Maybe this is one where dragons exist. Maybe this is one where elephants can fly. Maybe this is one where an anthropomorphized mouse can own a regular (albeit cartoon) dog. We can accept those conceits on the terms they’re given, because it’s a cartoon. Audiences balk at other media for being “unrealistic,” but “cartoony” — effectively stylized unrealism — is a compliment. At least, that’s how I tend to think of cartooniness: a fun relaxations of the “rules” that govern fictional worlds, making room for a heck of a lot more imagination and fun. Such is certainly the case with Lockjaw 3, which finds even more fun to mine from relaxing its already madcap rules. END_OF_DOCUMENT_TOKEN_TO_BE_REPLACED