Today, Scott and Patrick are discussing Nightwing 15, originally released December 19th 2012. This issue is part of the Death of the Family crossover event. Click here for complete DotF coverage.

Scott: Superheroes are defined by the things they care about most. Whether it be a loved one, a city, or a planet, there must be a something that compels them to fight, something for which they can be held accountable. Their physical abilities may make them Super, but it is their desire to protect the things they care about that make them Heroes, and what differentiates them from other physically powerful figures, like villains or, say, sidekicks. The success of Nightwing as a series ultimately depends on whether Dick Grayson can shake the notion that he is a sidekick, fighting to save Batman’s Gotham rather than something of his own.  In Nightwing 15, with the threats against Dick’s beloved Haly’s Circus beginning to have real consequences, it finally feels like he is blossoming into a Superhero in his own right.

The issue begins with Jimmy, the poster boy for Haly’s Circus, getting cornered in a dark alley by The Joker. Nightwing and Batgirl are coming to the conclusion that The Joker knows who they are when Dick gets the call from Sonia that Jimmy is dead. Dick races to the circus grounds, where Jimmy is tied up with his face contorted into a Jokerish grin, and tells the rest of the circus performers to get on the bus and out of Gotham. Dick turns his attention towards finding Raya, who is meanwhile being woken up by The Joker in what looks like an aircraft hangar. Dick has no luck tracking her down and stops by the morgue to take a blood sample from Jimmy before heading to Sonia’s to sign some paperwork. Dick and Sonia share an emotionally charged kiss before Dick receives the results from the blood test and abruptly leaves. There was jet fuel in Jimmy’s system that was traced to Kline Industries. Dick heads to the abandoned Kline factory- the hangar from earlier- where he is confronted by The Joker and then attacked by a drugged, grinning Raya. The toxins in her system cause Raya to collapse, and she dies before Dick can figure out how to save her, leaving behind a message The Joker carved into her flesh: Dick’s invitation to a “surprise party” at Haly’s Circus.

Despite being the quintessential “Batman villain”, the fact that The Joker is directly targeting Nightwing and Haly’s Circus feels like a defining moment for Nightwing’s Superhero sovereignty. This moment had been teased in recent issues of Nightwing, with little flashes of The Joker turning up sporadically, but it hadn’t added up to much before this issue. Right off the bat, it was clear this one was all about The Joker. The first few panels show Gotham City plastered with posters for Haly’s Circus, featuring Jimmy in full clown makeup. You can bet The Joker won’t take kindly to the idea of being the second-most talked about clown in Gotham. And his first appearance is marvelous. Yes, he resents that there is a new clown in town, and he makes Jimmy his first target. 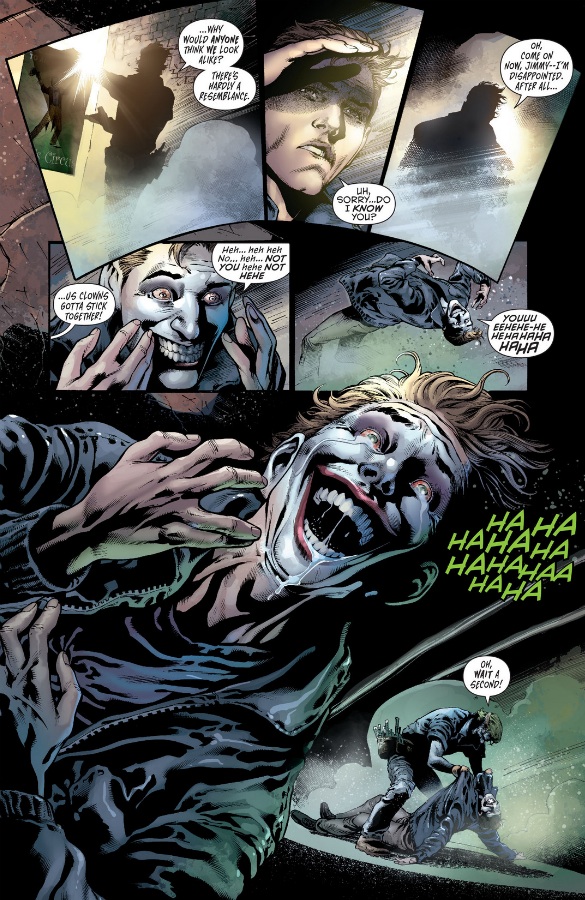 I love the way penciller Eddy Barrows clearly shows what is happening to Jimmy even though it isn’t really explained and it doesn’t make a lot of sense. The Joker appears in a cloud of gas, which causes Jimmy’s face to look exactly like The Joker’s while he laughs hysterically and then dies. Pretty crazy. I don’t understand quite how that works, but it’s enough so that when Raya shows up later on with her face looking like The Joker’s, we know her fate.

I wasn’t as psyched about the non-Joker-centric parts of the issue. I’ve always found the Dick-Sonia relationship to be peculiarly uninteresting, as Dick tends to be an inactive participant, and while their budding quasi-romance is a plot-point in most issues, there are hardly ever any notable developments.  Things kind of come to a head in this issue when they start to kiss, but then Dick remembers that Sonia’s father killed his parents, and that kissing someone whose father killed your parents is, of course, not cool. Why this does not prevent him from hiring her as his financial adviser, constantly risking his life to save her, or repeatedly agreeing to romantic rendezvouses thinly veiled as business meetings is unclear. Still, there has been a lot of build up to this moment, and it is completely wasted by a couple of clumsy panels.

Ugh. Yes, Tony Zucco killed Dick’s parents. It’s an important part of Dick’s past, it’s what makes his relationship with Sonia so cringeworthy, and it’s what drives the awkward tension of this scene. So for Barrows and writer Kyle Higgins to beat us over the head with it so relentlessly right when all this build-up finally pays off just feels insulting. And really, I could forgive everything, but the crying Dick with his head in his hands on the right side of the page is just too much. I’m constantly trying not to make a “What a Dick!” joke when writing about Nightwing, and it has never been more difficult than it is right now.

The saga of Dick and Sonia will go on, progressing little by little I’m sure. But shit is getting real with Haly’s Circus, and fast. It’s the Circus that has emerged as Dick’s great responsibility- the thing that could come to define him as a hero. What do you think, Patrick? Can you care about Nightwing for Nightwing’s sake, or will he, and this series, always be a sideshow?

Patrick: That’s an interesting question, Scott. The most I’ve been engaged with Nightwing was during that brief 3 1/2-issue run that synchronized pretty closely with Batman‘s Night of the Owls event. In fact, there were times when it wasn’t totally clear who had more skin in the game during that storyline, Dick or Bruce. Death of the Family is another animal entirely, and while Batman is clearly the flagship title for this event, it’s Joker that carries all the action. Even a the bad issues of this crossover have been moderately salvaged by a well-written Joker (generally… there are some issues of Catwoman and Suicide Squad that could not be saved).

I also love that you’re asking the question the Joker would have you asking. So much of this issue is about bad copies: Kline fuel is a knock-off of Wayne Industries brand jet fuel, Raya’s grotesque joker form is a poor copy of herself, and Jimmy is a poor copy of Joker. And our boy, the Joker, has made his opinions on these copies clear: 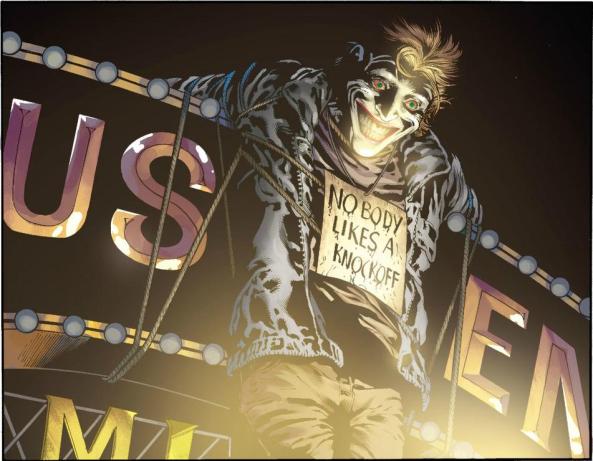 Certainly, this line of criticism extends to the ultimate poor copy of Batman: Nightwing. Hell, Dick even spent a year or so wearing the cowl – you think Joker’s happy about that? If Joker’s main objective is to streamline the Bat-family, disenfranchising Nightwing is a logical first move: Dick proved that a the concept of “Bat-Family” was even possible. Plus, if you want Batman to get down to business, you don’t want Dick Grayson to ever get behind that cowl again – too modest, too sensitive, too understanding.

Way, way, way too sensitive. Yeesch, that kiss sequence is sloppy. Why is there lettering in his memories? I feel like you get to do one or the other: either the words or the image, but not both. Also, it seems like an immaterial trauma at this point in Dick’s life. Yes, Tony Zucco killed your parents and now you’re making out with his daughter – there’s also a homicidal clown that’s picking off your personal and professional friends. Let work out some priorities.

It’s great to have the ol’ Higgins / Barrows team back on this series. Right around issue 10, this book started to feel like a monthly slog through Dick’s adventures with an odd assortment of villains, ranging from THE MOST IMPORTANT EVAR!!!! to fairly inconsequential. This hits the sweetspot, but per Scott’s original question, I can’t tell whether that’s because Joker is a villain that matters to Batman, or if his relationship to Dick is compelling enough on its own. I do like that there’s a thematically appropriate target in Haly’s Circus for Joker to bait Nightwing with. I remember thinking to myself some issues back that Jimmy is a fool for wearing that makeup in Gotham City. Well, he doesn’t have to worry about that anymore.

Actually, it’s sort of a bummer to see both Jimmy and Raya killed in the same issue. Both are strong connections to Haly’s, and therefore strong connections to Dick’s past. In its early run, Nightwing seemed to explore variations on the theme “you can never go home again” using this immediately foreign and familiar circus as the prototypical “home.” As those last vestiges of his past disappear, I wonder how that changes Dick’s plans for the future of Haly’s. Further, I wonder how that changes Higgins’ plans for the future of Nightwing.