We pick up with our intrepid heroes in the soggy remains of Gotham, as Arthur pleads for level heads. It’s difficult to make that case when your hands are around your friend’s necks, but then again, Arthur has never been all that familiar with level heads. A fight ensues, and Orm manages to completely overwhelm Batman, Superman, and Wonder Woman. Meanwhile, Vulkro is helping Cyborg anticipate the Antlantean war plans, which include killing Dr. Shin. Cyborg manages to Boom Shin to the watchtower, but decides to head back to help his friends. This means a lengthy upgrade surgery so he can breathe underwater, so he calls in the second string to take over while he’s under: 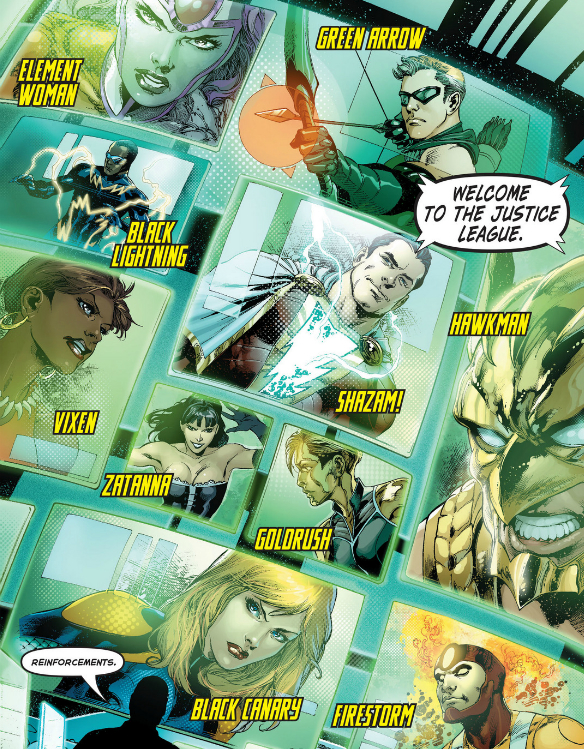 This is a pretty good mix of DC’s B- and C-stringers, but I can’t help but notice the prominent placement of Green Arrow and Hawkman — one can’t help but wonder if Cyborg should be welcoming them to Justice League of America.

Of course, not everybody there will be members of the JLA, but a few more will be involved in the Trinity War, whatever that ends up being. I believe this is the first mention of the likes of Element Girl in the New 52 (you know, outside of that FCBD gatefold), which makes it feel like the Trinity War might be a little closer to becoming a reality. Admittedly, that’s not that exciting, but there’s simply not that much to get excited about in this issue. At least, not in the lead.

The backup finds Dr. Shivana continuing his quest to collect the seven deadly sins, but the meat of the story is Billy’s fight with Black Adam. Billy more or less has his ass handed to him, so he “SHAZAM”s back into kid form and escapes. It looks like he may be driven back to the Vasquez’s, after all, which is an interesting development. More than anything, though, I’m just excited about Billy’s characterization here. The entire Justice League may sound like the same ‘roided up moron, Johns is crafting a unique and believable voice for Billy. 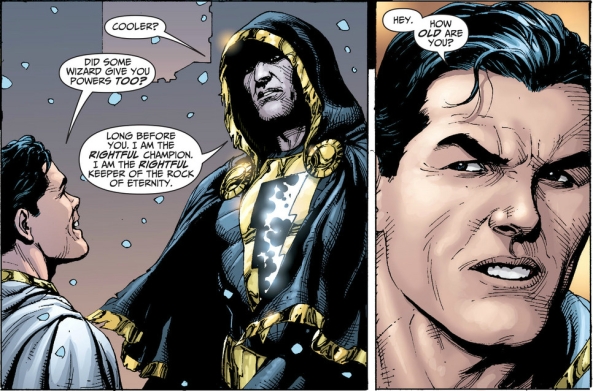 Billy doesn’t understand the threat Black Adam poses, so he proceeds to have the same conversation he would have with any kid. It’s totally relatable, which is more than I can say about the lead.

Johns seems intent on suggesting that the Justice League really isn’t all that effective. Remember when they met? They were just fighting each other. If Darkseid hadn’t interrupted their fight — which also, conveniently distracted everyone from the damage they had already caused — who knows what would have happened. Basically, they just fight whatever the biggest thing is. If that thing happens to be a bad guy, it’s a boon to humanity, but they’ll keep fighting even if there isn’t a bad guy (you got to fight something, amirite?). It’s why they fight each other so much, and it’s also why they’re so bad at using their words. This meeting with Orm should have been all about diplomacy. Instead, it’s all about sleeper holds.

Seriously though, headlocks are no way to convince someone you don’t want to fight them. The Justice League seriously needs to work on using their words.

Which brings me back to that question “what if there were a problem so big the Justice League couldn’t solve it?” It turns out all you need to defeat the Justice League is challenging them to a “see who can not fight the longest” contest, but is the Justice League of America poised to be much better on matters of diplomacy? I suppose Jonn would be a pretty good candidate (you kind of have to listen to a telepath), but I’m not convinced anyone else would be. Hell, what do I know? Maybe the New 52 Vibe is trained in conflict mediation.

Anyway, Zach, did this feel like the natural progression to you? Does it make any sense to bring in Green Arrow to solve a problem the trinity couldn’t? Do you think it’ll all come down to the Red Tornado?

Zach: I sat this book down and felt satisfied, so Drew, hope you don’t mind while I play a little devil’s advocate here, because even though this issue was a brisk read I found myself really liking the nuances present—especially on the B-side of this track.

The League’s go-to mediator is Batman and following the Gotham flooding and Arthur’s Aqua-choke, things intensify. There is a point where words won’t cut it anymore after hundreds are dead, and Batman knows that. Arthur only wants to talk when he is clutching someone by the throat and Orm is dumbfounded as to why his brother is being treated as an equal rather than king. I found it easy enough to stomach how things went so awry so fast. I think Geoff John’s is playing to the escalation needed in a title where you group together the world’s most powerful heroes on a single team and say “Go beat someone up.” This is as natural a progression as I could imagine.

On the Cyborg side of things, we start seeing Victor’s place in the universe fleshed out more through quiet sacrifice after quiet sacrifice. That Pyrrhic victory was cathartic. Vic’s losing more and more of his humanity—all without a best friend to lean on. The Red Room begins to look toxic. Cyborg is already installed with AMAZ-OS software, and now loses another organ. All the while we get hints of Magnus’s Metal Men from a Johns’ constructed section of DC’s 2007 series “52” (they are bad news!), and we get T.O. Morrow screaming for his Red Tornado to solve the magical lightning problems that Orm is cooking up. That’s why I think this expansion of the League works. Superman can’t do magic, and Atlantean relics are all about that. Aquaman’s brother decimated the entire Justice League with a single attack because that would be their weak point. They have too much faith in technology (tack on “punching things” as well) and never covered up the gapping mystical hole in their arsenal.

Hence the “wake the world” call. Zatanna and Billy are both perfect fits for bouncing the Justice League back into form. I mean Batson in his own right wields magical lightning at his fingertips. Stepping back and looking at the other choices? Batman’s out of commission, Green Arrow is the next best thing—especially from a distance. Victor’s call for reinforcements has a guided hand behind it because of the upcoming JLA, yes, but most of the choices here also provide a much-needed function to the dire straits Orm has cast. The savior may not be Red Tornado, but a weather controlling android sure couldn’t hurt the situation.

Now, I have been so eager just to say this: Ivan Reis is a rock star. Plain and simple. His page usage and cinematic quality are so attuned to Geoff Johns’ writing it is nearly unfair. The first thing his Wonder Woman goes to is a chokehold to snap Orm’s neck, and I love it. Since Greg Rucka had her shatter a neck in ye olden DCU, that’s been engrained in her character. That little treat being there, I love it. Honestly though, Ivan’s art team meets their deadlines while also delivering work that gives such a scope to what threats are being dealt with. We never lose sight of just how outnumbered or outplayed the League is in this book. You hardly even need the words.

Really quick on the backup, I completely agree with your excitement here! Geoff Johns and artist Gary Frank play up the hopelessness to a wonderful degree all in the aftermath of a single punch. Just look at the job done with having the child shine through the man here:

I can’t wait to stop back and see what the effects are, and how that makes this Billy Batson into the one being recruited into the Justice League on such a short notice. You think he’ll throw up a cocky demeanor as a shield when in the face of danger? You think he’ll just know everyone is counting on him and go barreling headfirst?

If you are expecting a character study from Justice League, you may have to wait for the magical eight pages in the back of the book. But the tension is definitely mounting all through the binding. Throne of Atlantis is definitely a return to form in my eyes.