Patrick: Are you fucking ready? No, seriously: ARE YOU READY FOR THIS SHIT? Justice League of America has been hyped to high-heaven – apparently our appetite for books called “Justice League” and written by mega-creator Geoff Johns know no bounds (remember how he also wrote the Justice League International annual? You better remember that one; it’s referenced here.) So, okay, we’ve all done our homework as prompted by DC, right? We’ve looked at the line-up and been all like “whoa, Martian Manhunter’s going to make this group really strong” and “Catwoman’s really more of a bad guy” and ‘WTF is Vibe? LOL!” Issue one serves to put your questions into the mouths of Steve Trevor and Amanda Waller – almost perfectly emulating the experience of waiting for this series to come out.

The bulk of this issue takes place in Waller’s office, where she briefs Trevor on the new team and tries to convince him to lead them (or train them or bake cookies for them… it’s not totally clear what Steve’s role would be). Trevor scoffs at just about everyone on the proposed team, making it clear that — not only do their powers seem ill-matched for the Justice League but — these people don’t sound pleasant to work with. He — perplexingly — offers Catwoman as a solution to the myriad of personality problems in the group.  Meanwhile, Green Arrow, wearing a silly mask and horns, has been hunted and injured while out doing… something for Waller. Ollie makes it back just in time to crash on the A.R.G.U.S. operating table.

This issue takes a page from Team 7′s zero issue, effectively giving each member of the team a page or two to express their personalities, maybe do something cool, and get out. A few of these personalities get to be expressed in more active fashion than others. We get to see real-time conversations with Martian Manhunter, Catwoman and Green Arrow, but everyone else is essentially reduced to dramatically re-enacting the case file Waller has on them. And poor Simon Baz is just a footnote in this story – appearing only as headshot on Amanda Waller’s cork board. 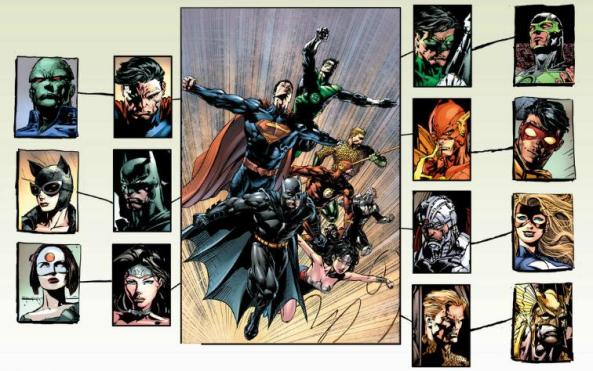 It’s hard not to see Waller and Trevor as members of DC editorial, picking out the best members for their new superhero book – especially as Waller takes Baz’ inclusion on the team as a foregone conclusion (I mean, Johns just spent so much time setting him up in Green Lantern, why wouldn’t he be on the team?). It’s also frustrating that the image posted above it is probably the most exciting part of the issue. Johns, or artist David Finch, had an immediately exciting way to depict how this team could stand up to the JL, and everything that comes before it serves to reach that point. But like, it’s some pictures on a cork board… and another thing – is Waller using a slightly modified cover to Justice League 1 as that poster in the center? Or is that some kind of New 52 promo art she got her hands on?

What’s extra bizarre about this chart ‘n’ headshots climax is that David Finch displays a pretty solid knack for staging action in clear, exciting ways. Finch draws the two-and-a-half page Hawkman scene like a monster movie where Hawkman is the monster. It’s moody and dark, and that mace comes down like Jason Voorhees’ machete. Or check out the smooth and kinetic — if ultimately pointless — crime fighting Vibe does here: 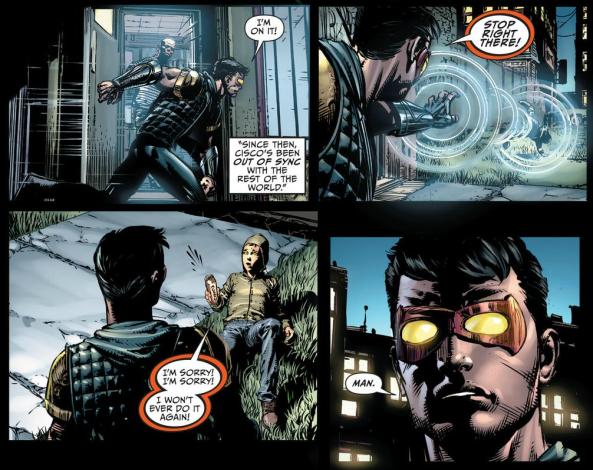 I love the way the direction of the action in the scene directs your eye – Vibe rushes right, toward the next panel and then knocks the kid down, at which point our eyes hop down to the next row. And then to top it off, we see up at Vibe from the kid’s perspective, just as Vibe realizes he’s being kind of a tool. There’s a whole story in those four panels, and I like that.

Something I don’t like so much is the way Finch draws the human body. Steve Trevor is ripped. Like, he’s just huge. And his veins might as well be coaxial cables running through his body. I know Trevor’s gotta be a strong guy to keep up with this crowd, but yeesch! Also, Star Girl, you’re too skinny. 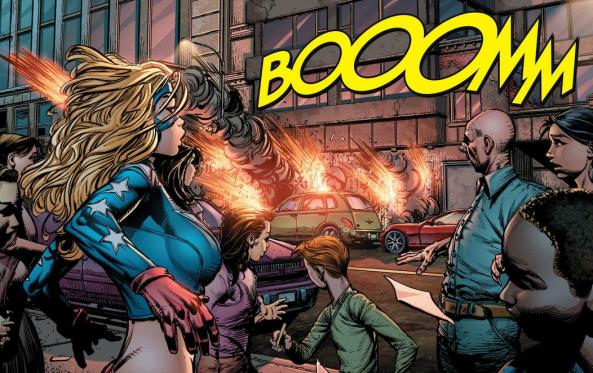 I know she’s supposed to be a So Cal high school girl, but that ain’t right.

How much you like this issue is ultimately going to come down to how much you like the concept of these heroes running around together. If you’re content to have the first issue just sort of tease that team-up for another month, then I guess this is totally your jam. With Martian Manhunter dominating the back-ups in the future (or so the solicits claim) there still seems to be too little space to properly develop the characters I’m interested in. I’d much rather see Catwoman and Katana explored by Johns here than by Ann Nocenti in their own series, and poor Hawkman is going to get kicked out of his solo book in just a few months. Plus there’s literally nowhere else to go to get a Star Girl fix.

[Incidentally, we’re not covering Justice League of America’s Vibe from issue 1. We’re taking the “wait and see” approach, and if it warrants our attention after three issues, we’ll do one AC covering 1-3. For what it’s worth, I found Vibe to be an exciting – if exposition-heavy – way to link a bunch of different DCnU phenomenon. If anyone wants to start a Vibe conversation in the comments, I’m totally game.]

Well, Mikyzptlk, what’d you think of this issue? Might it have been more fun if it was just a poster with those 14 superhero headshots, a spool of black string and some thumb tacks?  (Oh and DC sent me the straight-up American flag version of the cover – which one did you get?)

Mikyzptlk: U.S.A! U.S.A! U.S.A! I hope that answers your question Patrick. To answer your other questions, I actually thought this issue was quite a bit of fun. Although I completely agree that it was chock full o’ exposition, I think it was all necessary to quickly establish the Who’s, What’s, Why’s, When’s and Where’s. Oh, and I think there were a few How’s too. The thing that I took away from page one of this issue, however, was a strong sense of tension and foreboding. 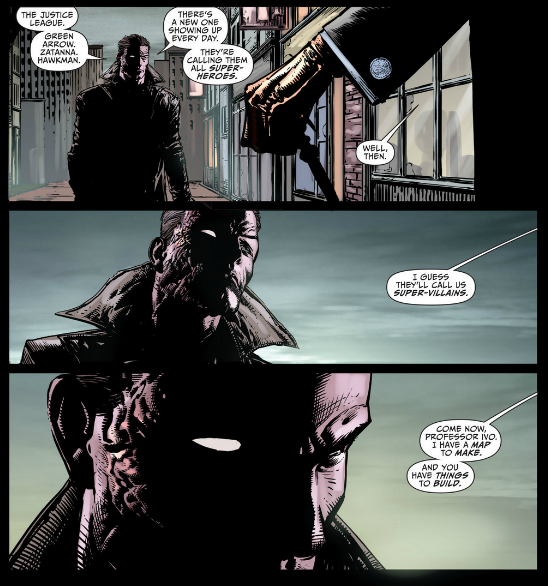 That’s from page one. It’s set 5 years ago, as you can probably imagine, right when super powered people started to emerge. The guy who looks nothing-at-all like Two-Face there is Professor Anthony “I’m probably going to invent Amazo soon” Ivo. The guy he’s talking to is a mystery, but what’s not a mystery is that they are putting together the Secret Society of Super-villains. The idea that the Society was an immediate response to the Justice League is incredibly exciting to me. What have they been doing for 5 years? Have they been operating this whole time? How powerful are they and how far is their reach? How’s the hell are they still a mystery after all this time?!?

Patrick, you mentioned that this issue is a tease and I can’t disagree with you on that point. The reason I think I enjoyed it so much though was because the tease seems incredibly promising to me. This team is going to be extremely challenging to get to work together but it should also prove to be extremely entertaining to read. Steve Trevor has easily been the best part of Justice League with my only complaint being that he wasn’t used more. Now that we get to see him in a starring role acting essentially  as the Nick Fury of the DCU, I couldn’t be more excited.

Patrick, you also expressed some concerns about the characters you want to see developed not getting much room to do so. I completely understand and share your concerns with this, however having read Johns’ incredible run on the Justice Society of America,  I know he can get the job done. That book also featured a large team, and even though every character wasn’t necessarily featured heavily in each issue, every single character got their due and was generally better off for it. Johns has stated in interviews that this book will be a lot more like that one and believe me when I say that can only mean good-scratch that- great things for this title. Johns is a guy who knows how to resuscitate  characters. He brought back an entire generation of comic book characters in JSA and an entire franchise in Green Lantern. And while this issue was mostly exposition, what I saw in that was merely the beginning of Johns’ resuscitation of many of the characters that the New 52 hasn’t exactly been kind to. Amanda Waller, Hawkman, Catwoman, and Martian Manhunter all need some life breathed back into them and Johns is the guy to do it.

55 comments on “Justice League of America 1”